UK, February 11, 2010 - Pulse rifles, xenomorphs and shimmering stealth cloaks; all things that have long passed into gaming cliché since their debut on the silver screen.

UK, February 11, 2010 - Pulse rifles, xenomorphs and shimmering stealth cloaks; all things that have long passed into gaming cliché since their debut on the silver screen, but in Aliens vs. Predator - the first-person shooter that sees Rebellion return to the universe it helped establish over fifteen years ago – the Oxford developer is given free rein to present these toys as God (or as it is in this case, James Cameron) intended. The result is a pitch perfect tribute to action cinema's greatest icons, wrapped up in a game that's equal parts horror, shooter and stealth-'em-up.

Colonial Marines, Aliens and Predators clash in what's fast becoming a regular get-together, though rest assured that Rebellion handles the franchises with more care than the two most recent films. They collide in a story that's little more than an excuse to magpie the original film's stand out moments, taking place on a planet that seamlessly weaves elements from the second and third Alien films and the first Predator. No opportunity to crowbar in a knowable quote is passed by, and Aliens vs. Predator is all the better for the extended fan service; it plays out like a best-of reel, with Lance Henriksen anchoring the whole show with a knowingly hammy reprisal of his role as Bishop. 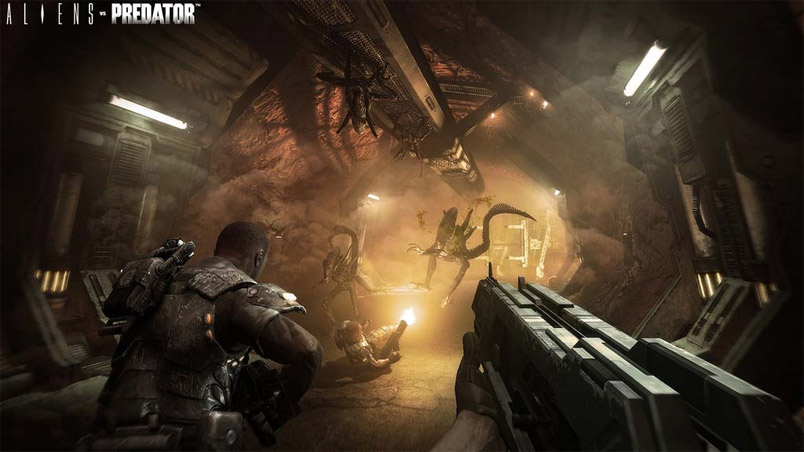 The three species' tales interlace, though they're each playable as standalone games. The set-up makes for three vastly different experiences, offering up unique perspectives on the same game world and often giving a different take on the same pivotal moment in the story. Most players will have favourites and it's clear that Rebellion does too – the Colonial Marine has the most polished of all three campaigns and it's in some ways understandable as this is where most fans of the franchises will head first.

Here Aliens vs. Predator is at its most traditional, though for both better and worse it still strays from the standard shooter template. The Colonial Marine's opening moments are full of the suspense normally associated with survival horrors, and to its credit Rebellion succeeds where most others fail in providing some genuine scares.

Their effectiveness is helped by an excellent use of light and dark, and for all the dazzling weaponry it's the flares that prove the most useful tool initially. No doubt the fact that the boogie man in this instance is one of the most frightful creations to have graced science fiction helps – defang H.R Giger's phalocentric follies and give them party hats and they'd still out-scare other movie monsters – but Aliens vs. Predator wins out by adhering to the age old horror rule of keeping the threat out of the frame for as long as possible.

That motion tracker certainly plays its part too, it's insistent blip creating the perfect soundtrack to some wonderfully tense moments. When the time finally comes to pull the trigger, however, Aliens vs. Predator reveals itself to be solid if unspectacular in this department, the basic shooting missing out on many of the advancements made in the genre in the past few years.

A lack of iron-sights or crouch mode, the inclusion of boss battles across all three campaigns and a frame-rate that's not as generous as most other games give Alien vs. Predator a distinctively old school flavour. Conversely this does work in the game's favour – combine the vintage mechanics with the iconic arsenal and you've got a game that's full of rollicking action, the unabashed nature of which captures perfectly the spirit of the films that it's inspired by.

That iconic arsenal also helps elevate it well beyond the mundane. The most important aspect of any take on Aliens is intact, and the Pulse Rifle is more beautifully realised than ever before, that distinctively violent ripple sound never failing to inspire a smile. It's joined by other favourites such as the flamethrower and a smart gun that's suitably powerful, as well as first-person staples such as a pistol, shotgun and scoped rifle.

And while the campaign does its best to make players feel like the gung-ho goons of James Cameron's 1986 spectacular, it's in Survivor Mode that the Colonial Marines really shine. Playable online with up to three team mates or offline solo, this is a distillation of the very best that Aliens vs. Predator has to offer, throwing wave upon wave of Aliens at the player and steadily upping the tempo and lowering the odds of making it through alive. It's basic but brilliant.

The Alien and Predator feel like two sides of the same coin, offering their own distinct takes on stealth. For the Predator, it's a stealth that's powered by gadgetry: the famous cloak is bolstered by a variety of vision modes to stalk down prey from the heights he's able to reach, and when it comes to the kill he's not under-equipped either.
A shoulder-mounted plasma cannon, spear and razor-tipped disc provide ranged options, and indeed so plentiful are the approaches available to the player that it can be initially overwhelming. It's not helped by occasionally clumsy controls – wrestling the Predator through treetops and scoping a kill is never quite as smooth as it should be, and it's not helped by map design that's often stubborn in what it will and won't allow. As as result sometimes it's hard not to turn the most calculated killer in cinema history into a ham-fisted dolt, but when it does click it's immensely satisfying, and devising then executing the perfect kill from afar is always a thrill.

But to see Aliens vs. Predator really bare its teeth it's necessary to get up close and personal. Trophy kills, triggered when attacking an unaware opponent, are gleefully gory as Rebellion invents countless ways to do nasty things to someone's head. The Alien gets the most creative options, using its tail to poke someone's eye out, thrust down their throat or give them a vanilla decapitation depending on which mood takes them. 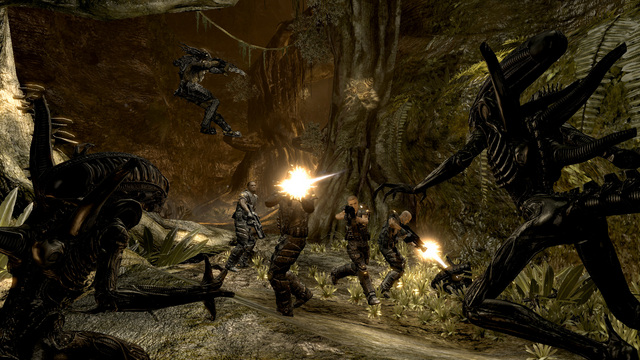 The Alien's main ally is its agility, it's ability to cling to any surface proving equally empowering and disorienting. It's also subject to the shortest and arguably the weakest of the campaigns - no surprise given the difficulty of thrusting a compelling story onto a mindless killing beast, though Rebellion does try its best and the campaign comes out looking not too silly.

What's more awkward are some of the loops that players are forced to jump through when playing as the Alien. Occasional switch puzzles put the Alien in a quite ridiculous situation and show that ideas are thin on the ground in this section of the game, at least compared to the wealth of content that fuels the other campaigns.

It's far from a disaster, however, as the stalking and killing is at its best when its served up straight. It's best highlighted in several arenas that pop up through the campaign's brief duration that feature a horde of Marines to take down. The light and dark mechanic that makes the Marine sections so chilling is flipped on its head, with the best tactic to destroy the lights and skulk in the shadows, using the Alien's heightened senses to pick out a kill.

A melee system is the glue that holds all three species together. Both the extraterrestrials have heavy and light attacks, while the Marine has just a light, and a block move is shared across all three. It's implementation is hardly graceful and when species go toe-to-toe the ensuing fight often has all the flair of a 11pm showdown in a pub car park, but the frenetic nature lends itself well to multiplayer.

A natural beneficiary of the species' fundamental differences is multiplayer, which while not the measure of the game's topping Xbox Live, PlayStation Network and Steam is nevertheless quirky enough to ensure it will have its own dedicated fanbase.

The three clashing skill sets present a balancing problem that Rebellion hasn't quite got on top of – at least in traditional deathmatch – but it's sidestepped out by some of the more inventive multiplayer offerings. Predator Hunt pits a single assassin against a horde of Marines – bag scorpion face and you can take his shoes. Infestation puts a similar spin on multiplayer: a group of Marines face off against an Alien and as each one is slain they switch over to become a Xenomorph, until one man is left standing. When it runs smoothly it's a riot, though if the matchmaking issues that have plagued the demo persist with the retail servers it could prove problematic. 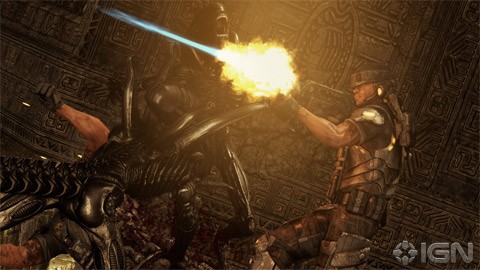 Visually Aliens vs. Predator is underwhelming throughout, but the rough edges are smoothed out by the deft use of those enviable assets. The Alien model in particular deserves special praise, and although the animation can be erratic it's still a wonderfully disgusting creation. With the graphics failing to impress it's the audio that does most of the legwork, and a fine job it does too. Both the Motion Tracker and Pulse Rifle are not only present but are recreated gloriously, and they're joined by other instantly familiar sounds ported over perfectly; the elephantine scream of a shotgunned Alien, the insect click of the Predator and the flash of his visor present in all their splendour.

I freaking can't wait until it's here, I think I explode :D

same only one more week:D

same here, people are just too fastidious these days

Other than the graphics, this IS probably the fairest review I've seen.

agree again, I haven't played it yet so I can't judge, but everything sounds pretty fair to me

come out dam it i must rip of my borthers head!!!