The latest version of Alien Arena is to be released spring of 2010, with a host of updates and new content.

A big, fat, slobbering release of Alien Arena is scheduled to be released in May of 2010. We've been working very hard on a great number of improvements and new content, as well as some gameplay updates and tweaks. As always, we remain committed to making Alien Arena the very finest free deathmatch experience possible, and are confident that version 7.40 will only fortify our goals.

For all you CTF fans out there, this release should get you excited, with two brand new CTF maps added to our lineup: Ctf-Invasion and Ctf-Oblivion. We've also added a brand new DM map, Dm-Downfall, an amazing map that has a style that is a little different than the norm for Alien Arena. Also included are a revamp of Dm-Warmachine, and (hopefully finished in time) Dm-Zorn. Another item of content updating is a couple of the weapons, with the beamgun and disruptor both having been replaced with far nicer, more detailed models. 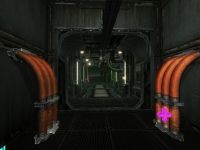 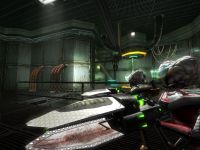 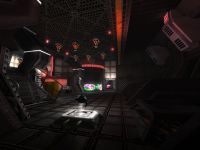 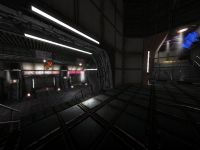 Over the last six months, we have listened very closely to the community, as well as outsiders in regards to gameplay. As a result, some changes were made that we feel really improved the experience. Below is a list of the gameplay changes:

We have also been working very hard on the engine itself. The menu system has been revamped to scale better, and use a higher resolution and larger font. We've optimized all of the lighting routines, and we've made some improvements in overall per-pixel lighting of map surfaces, as well as some shader updates that make things look more natural. Shadows received a great amount of work, with all dynamic shadows being rendered using shadowmaps in GLSL(shadows continue to be a focus as the engine evolves forward). There were also some security fixes, a host of bugfixes, including some in our antilag code.

We will be making some more periodic news updates on the game as release time approaches. There are some exciting things coming to Alien Arena in the future, and we will do our best to keep our fanbase informed of them.

Great Job! It keeps getting better and better, and I am looking forward to the release :)

Another fine job done. Thank-you for keeping this game alive.

There had better be new weapons or vehicles.

lol, we'ed "better" huh? Sorry, no new weapons, and no new vehicles(yet). As for weapons, we likely will never(though I don't like to say never) add more, we don't believe in just continually bloating the gamecode. We are most definitely adding another vehicle in the future though, just not this release.

Until now I couldn't play the game because extremley low FPS (with great rig), I can just hope that 7.40 will work fine.

7.40 will be fine, unless you are still having the problems. If you are, would you mind posting your specs, and driver revision here?