As Alien Arena 2009 marches towards it's June release, we are sharing some of the more notable advancements in the game and it's overall quality. One of the major changes is the reworked sound system, which now uses OpenAL.

The target release date of June-ish is still alive as a load of progress has been made in the last few weeks. Chief among the new developments is the reworked sound system by our audio guru, Stratocaster. We now use OpenAL, and have added cool new features like doppler effects, stereo music, and much better audio positioning.

We also continue to create new content for this release, and not only have we remade some of the classics, we've added some new blood as well. Here are some shots of things to look for in Alien Arena 2009! 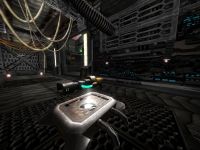 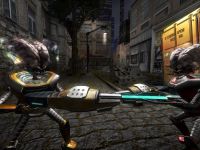 New maps all now make use of static and animated meshes for detail, which not only looks alot better, but also gives better overall framerates. Work continues on both content and the engine, and we are currently working on some nifty fullscreen GLSL effects that should be alot of fun to see!

Really cool. Stuff you can make with your engine is impressive. Quite unique retro style with all the cool effects.