Charge into to a dynamic battlefield at the command of a squad in this multiplayer third-person shooter.

Hold The Line is a project I started a couple years ago but shelved due to other projects and a busy schedule. After showcasing my Greeks Vs Orcs project and listening to peoples responses, I decided that game's most unique elements weren't developed enough to really achieve what I want to there. Unless... do we need another "city-building, sandbox, survival game"? Probably not. I will revisit that project as part of the umbrella that encompasses several of my projects, but that's another story.

Anyway, Hold The Line is a game designed around the idea of fighting in a large scale battlefield, where you command a single squad. The players, have to use their squad and abilities to try to push the battle in their teams favor. As your squad members are killed, more will automatically reinforce you. This creates a back and forth sparring between the two teams players and NPCs, until one can gain the advantage and press the attack. If a team can not hold their ground, they will eventually lose the battle if more territory or capture points are held by the other team.

Up until now, I've been largely focused on gameplay and experimenting with mechanics. In the past few days, I've taken a look at some areas where I could improve the graphics. For some reason, I've been significantly limiting the resolution of textures. So, I've made some higher resolution textures for foliage and terrain, which ultimately are taking up very little extra memory; the environments are looking much better. I've also worked in some post-effects, including bloom, depth-of-field and a distance obscurance. The depth-of-field is very light, only making longer distance objects naturally less sharp while avoiding making the image look blurry to the eyes. I've done some tweaking on the SSAO as well, cause everybody loves that stuff. That darkening where polygons meet satisfying as hell. 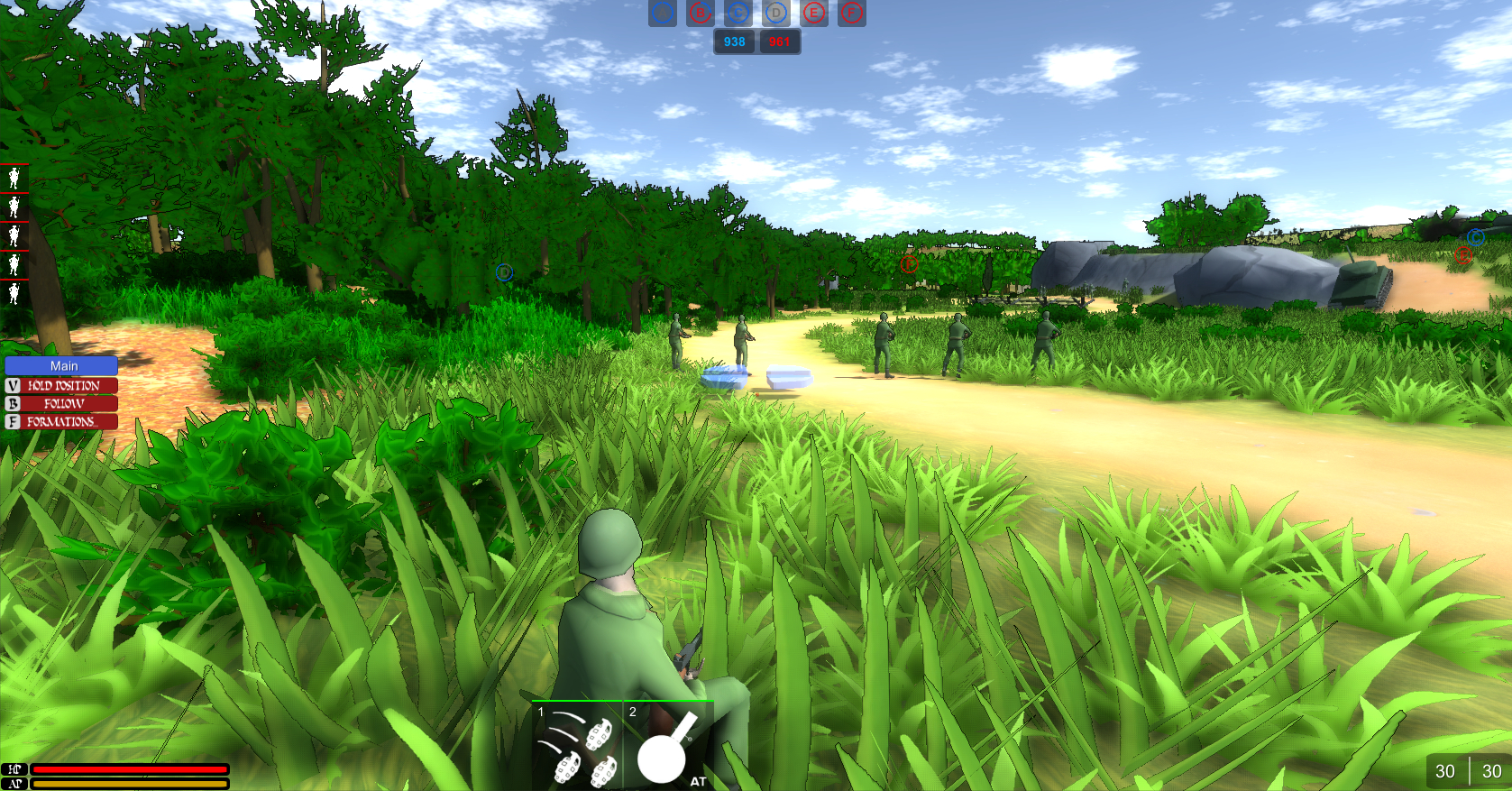 The soldiers all have new character models now. I worked out some stylized faces for the soldiers to fit the almost cartoon-like look I'm aiming for. I'm still looking for an artist and have been talking to a few. For now though, I will do what I can to improve the overall quality of the models, textures and shaders. 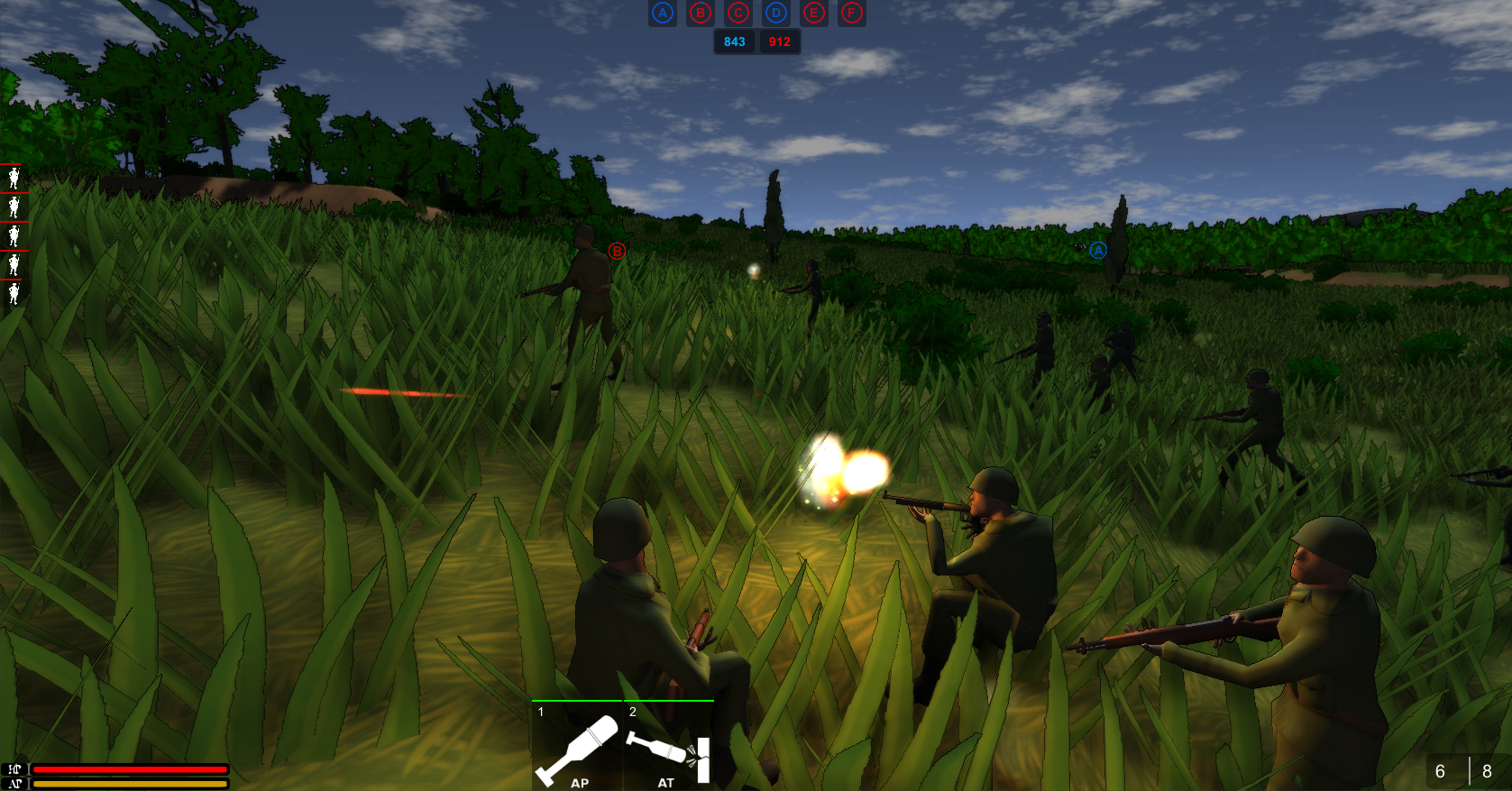 I spent time squashing any of the small bugs this week too. The game is alpha-ready and the networking holds up well in multiplayer tests with several clients. As development progresses, I will gradually make tweaks to the AI; adding and removing various behavior calculations and routines to maintain a balance of smart reactions while preventing gameplay from being disrupted. For example, if infantry encounters a tank, of course they should use any AT weapons they have. But should they fear it and hold position? On one hand, this creates dynamic situations where the tank becomes an obstacle. At the same time, this slows the pace of the game. There are plenty of options to explore; I'll be looking at every aspect to create the kind of atmosphere I'm aiming for. The battle should unfold emergently, but the player must be able to see what options they have to alter the outcome of the fight.

The game is now nice and stable, for multiplayer and singleplayer. I'm looking to get an alpha release out soon, so keep an eye out for it!

Great game. I love it. Cant wait for future updates. I was just wanted to know in what program did you make it? And what are the plans for the future of the game?

Thanks! For the first release, I'll focus on infantry and land vehicles. I have ships and aircraft programmed in but I haven't the artwork and they will need tweaking. I'll take it as far as there is interest.
As for the development. The underlying systems were written for my old engine but I recently ported all that from C++ to C#. I got that into unity and removed and ignored alot of their high-level, stock junk. I wasn't keen on their engine, but I can get performance out of it these days