A new week and a new report with new info. This time with an explanation on some necessary aspects importants to be ready for the launch of the Chapter 1, there's also some fanart...

This week I bring you some important explained aspects of the game because we're getting closer to the chapter 1 release and so we think this are a must to know about.

A Punishment for Mai is keyboard controlled. Here is a list:

Worth mentioning that while RPG Maker VX Ace has some basic support for joysticks, it can't be used here in its totality due to the extended use of the keyboard for the game systems.

Through our adventure we'll find many times facing this strange statue.

This 'figure' is the Savepoint. Getting closer to it will get you warned (!) as it was explained in a past report. Interacting with it will get all of your character's HP recovered. Keep in mind that the MN won't recover this way (MN can only be recovered with enemie's blood or in some important story points).

Finally the Savescreen will open up. You'll have to select a slot and then press the Z key for your progress to be saved. 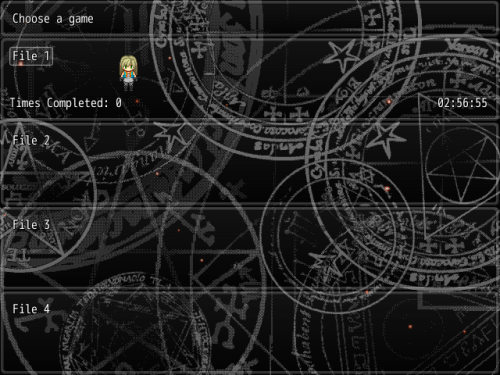 You'll get back to the game once the game is saved.

A Punishment for Mai's currency is called Sanguis and is basically just solidified blood from enemies they left when defeated.

The Sanguis are a scarce commodity, just like the places to spend it.

To buy items or ammo you have to talk to The Driver. He will give you the chance to 'spend' your Sanguis in his Shop. There's also a shop available at the end of the chapter. 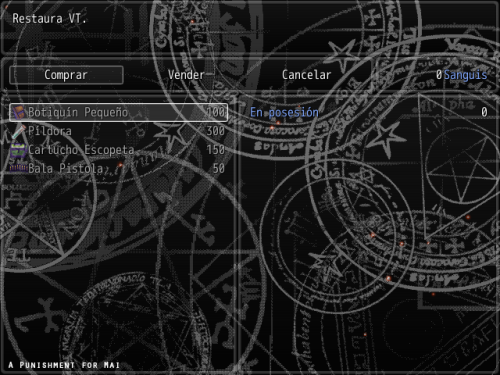 The items and ammo availables will change depending on the chapter you are.

This is a list of parameters, their abbreviations and their influence on the characters:

The Shield is the only protection the characters from A Punishment for Mai will can count with. And you have to be carefull to find it because there's only one chance to get it during the chapter 1.

With the shield in your inventory, just equip it from the menu (Q key).

Once equipped with it you'll be able to defend yourself while pressing the A key.

Defending yourself with the shield will prevent you from taking some damage and it even can reflect some kind of skills.

So don't lose it!

All the weapons from the game are organized by types.

The enemies that populate the game have a number of strengths and weaknesses to these types of weapon that must be taken into account when fighting them, to equip the proper weapon.

These are the different types:

And to wrap up this report, just like it's usual, a new Fanart for everyone. This time there is only one. It's a shame but anyway we're still happy to get new fanart every now and then. Not everyone have the luck to get a fanart for almost every report. Thank you qu1nt3r0:

Well, all this said, time to say goodbye and ask you to stay tuned for the incoming news and hopefully the announcement of the Release Date for the Chapter 1.

Goodbye until next time.