So you've heard us going on about how Malevolence is more than just dungeons, but now we have something to show for it!

So you've heard us going on about how Malevolence is more than just dungeons, but now we have something to show for it!

We've said it before but we'll say it again. The in-game world of Malevolence is infinite. The dungeon exploration is just a small portion of what the game is all about. Outside of the dungeons is a literally infinite world filled with tombs, labyrinths, farmsteads, mountains, cities, towns and more. Our original plan was to release a demo showing off the dungeons to get you hooked, but our testers said "NOOOO you totally need to show the outside world too!" so we have been working our butts off to get it working to show you all!

We've done a heap of interviews since this project started and met with a LOT of negative criticism telling us that an infinite RPG world at a graphical level of The Elder Scrolls is not possible, but we are here to tell you that we can. Actually... We're here to SHOW you. We've talked about it for a long time, but now it's time to show it off! Here is the first introductory video showing you the system working beautifully!


This is a VERY early video, so there are only a few object types, terrain types etc. No water bodies, no weather, very little flora and zero fauna. It's basically a proof of concept to say "neener neener" to the nay-sayers who have been saying it's not possible.

Remember what the dungeons used to look like before we added in the advanced lighting, shaders and all the other trimmings? Well, what you see in that video is in an early, raw stage like that. But as the weeks progress, you're going to see it getting better and better. 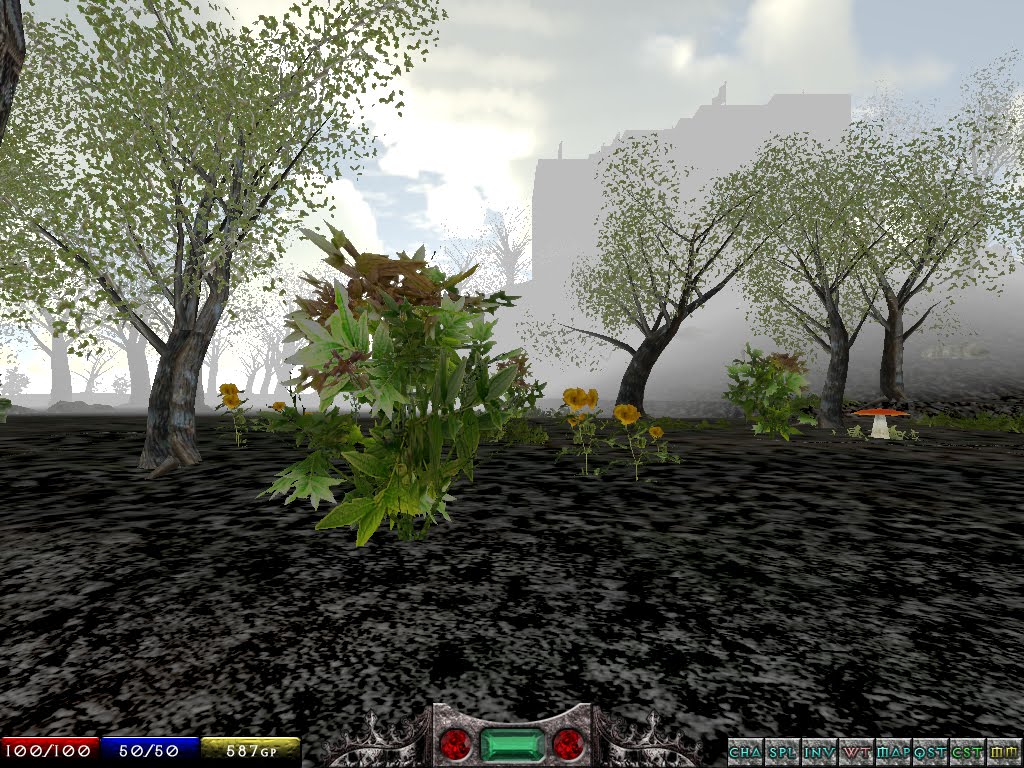 Even in this very early, raw, prototype stage, the world is super fun to explore and find things. It looks very simple on the front end, but there is a phenomenal amount of nonsense happening behind the scenes to make it work.

Our lead music composer, Nicolas Lee, has been hand-crafting some INCREDIBLE new soundtracks for the countryside exploration. You can only just barely hear it through the microphone in the above video, but there will be some new videos soon which will feature the music prominently. The tracks are truly beautiful to listen to and he's done an amazing job, so keep an ear out for them.

We've also welcomed to the team two new writers, Saxon Bell and Jordan Glew! They'll be fleshing out the world of Ahkranox in ways that we couldn't on our own. A big thank you to everyone who applied, but it came down to these two and we couldn't choose, so we brought them both on! You'll be seeing some of their amazing work soon no doubt!

So what sorts of things would YOU like to see in the overworld? Let us know in the comments!

And remember to join us on the social networks!

Given that The Elder Scrolls: Daggerfall (aka as just "Daggerfall"), which featured vast - albeit rather plain - procedurally-generated enviornments, was rather limited by the technology of its time, I'm not surprised that your team was able to create a rich, detailed procedural world. Also, given the quality of your previous work, I have no doubt that you'll eventually be stunning us with god rays, HDR (high dynamic range), cloth simulation, unique and stunning procedural towns and cities, oases, haunted forests, and a whole boatload of graphical and gameplay features and locales!

However, there is one question I would like to ask: how do you plan to keep bugs down to a minimum? Daggerfall is infamous because of the many bugs the game contains which remain unfixed to this day - and I'd imaging the procedural nature of the game has something to do with this.

A very good question! Basically the number of bugs in a procedural environment comes down to the accuracy of the procedural generation algorithms. Since everything is created from them, the only place bugs can exist is either in the algorithms themselves or in the engine's interpretation of the algorithms' output. We thoroughly tested the algorithms in a pure data-based environment (with no pretties) but now that the 3D environments are being added, we're encountering a few bugs with how the engine interprets the data. However, each bug we've run into we've been able to solve fairly quickly and it's come down to human error, rather than the algorithm.
We're big fans of Daggerfall and The Elder Scrolls in general, and Daggerfall in particular is a very big influence on this title, however, they used procedural generation in a very different way to us. From what I've read it was just for foliage placement in the wilds between locations, but the locations themselves were hand-placed. Malevolence is a bit different in that EVERYTHING from towns to items is procedurally placed.
We're glad to hear though that you 'get' that what you see here is very early stages. We can't wait until the environments are looking as good as the dungeons!

Thanks for the enlightening information on the sources of procedural environment bugs and what you're doing to fix them! I found it to be a rather interesting read.

Because the ideas I have for locations in the procedural environment of Malevolence: The Sword of Ahkranox are rather lengthy, I've sent them to your team via PM here on ModDB. I hope you and your team find my ideas useful in some way!

Then our mission is a success!

Glad to hear that.

I would steer clear of comparing the game to Elder Scrolls, their fanbase for some reason finds it necessary to just attack anything remotely similar, and in their ignorance not realizing that TES is actually a copy of Might and Magic and the Ultima Underworld games.

From a PR standpoint, avoid it like the plague, play into the fact that your game comes from old school games like Ishar, Might and Magic and Ultima Underworld.. Go back to the source and avoid competing with the popular games because no matter what, if you even criticise TES their fans turn on you. Its just not worth it... let them have their ignorance. (I've learned this from experience too as no doubt you have as well). As indies we need to avoid attacking the AAAs and instead play to our advantages where we can. I hope one day your game will be seen as an alternative to TES, but doing it right off the bat is going to cause you PR problems, you want to ideally downplay that for now until your quality improves to the point where it can quite easily replace TES.

True blue Aussie, through and through! We absolutely love TES and have played them all since Arena (even the ones that many so-called fans don't remember like Redguard). But to be honest, we don't care what criticizers think as we're making this game for ourselves. In the true and honest spirit of things we're making this game because we desperately want to play it. It's taking inspiration from all of our favourite games, but at the same time being made our own (not to mention creating a few industry firsts). No matter how you operate, haters will hate, but at the end of it, if we're true to ourselves, then we'll have our ideal game at the end of it - and if others want to play it as well, then we certainly won't stop them :) VERY glad to hear that you like the M&M influence though, as that is most definitely about 70% of the game's inspiration right there!

Its definately a bold thing to do with the industry the way it is to produce a true classical dungeon crawler, I think most indies have noticed to hole in the market that few AAAs are prepared to take a risk with.

I've been in the industry for a while now here in Australia, I now have my own studio and am working on an RPG of my own. So its good to know that there is someone else out there trying to do the same.

That's cool! We're based in Brisbane. We agree that there is definitely a hole in the industry with proper turn-based RPGs. Hopefully others will find that Malevolence fills the gap!

Great job so far. Not sure if you'll agree, but I believe it would be great, if the final version had really dark night and dungeons, so that using a torch or a magical source of light was a necessity, not just a fancy feature. I remember that when I played Elder Scrolls, one of the first mods I always installed was dark nights. Oh and I'm an Elder Scrolls fan and I'm not gonna turn on you Mr_Cyberpunk :D. I don't believe myself to be an ignorant either...

Hi norolim! Yes, the dungeons are painfully dark in this game, and carrying torches or magical light REALLY helps. Currently the outdoor environments don't have their shaders or lighting system in place, so they look pretty dodgy, but have a look through some of the other screenshots/videos of the dungeons to get an idea of what it'll end up looking like!

This game just got a lot more interesting. Now, you can travel outside of the dungeons. :D

Would it be possible to port this to a handheld device like the 3DS someday? You should look into that. ;-)
I have yet to see an ES-like game on a handheld system!

We've actually been saying the game would have this for a long time. It's even in the title blurb above! Glad you're more interested though!

On the DS you can play games like Orcs & Elves or Mazes of Fate to get your fix. Malevolence is too high-end to put on such a low-powered platform like that. We'll be doing a smart device version, but it'll look more like Diablo to compensate for the power difference.