Now it looks more realistic than previous version and it has a nice muzzle flash!

As I promised - a new version of minigun. Of course - a new model of minigun. Now it's animated. I attached a nice muzzle flash effect to it, and replaced a sound(you can't hear it in video - fraps didn't recorded it) Now weapons can be used - you can kill npcs with them! 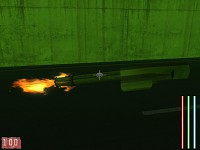 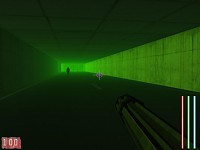 Sorry for not as good looking graphics, it's just a test and it's a first map built for my game engine(5 months old!). Also I'm planning to add a ragdoll spawning after npc kill - now it's only an animation, but my engine supports ragdolls(with a huge, difficult XML ragdoll definition file). The ninja is a first npc because it's original Ogre model, and it has animations, but I'm not so good in modelling characters...


Yeah, if you have some ideas about the game or you want to join the project(I need modellers) - please PM me! Sorry if it's again broken hyperlinks - I'm just copypasting the embed code into the page and it's something with ModDB :) !