Happy, wholesome news about programming, the world map and our project in general. Also, something for you to guess.

Hey people! It’s Arvind this time with some sweet news to share. Now before you run away in fear of the horrible art I am about to show you, be aware that it is all going to be replaced by our awesome artist, so just see it this once and you’ll never have to see it again. Promise.

Let’s start with one feature that is quite central to the game – The World Map.

Okay, enough screaming in horror at my sheer impudence to show you this horrible picture. But once you get past the art and to the substance, you will notice that the locations on this map all have one thing in common. Come on, guess that common thing while I show you some other pictures of the development process.

Left : How the map icon looks on screen (Henri drew that), and Right : the selection effect that occurs when you select a location on the world map.

So there I am, hard at work implementing new features and toiling away in inhospitable conditions to polish the game to near perfection. For those of you who prefer using the keyboard to the new-fangled mouse and GUI stuff that is surely a fad, I’ve added full keyboard support to all the in-game interfaces. After all, nobody will be using mice after 5 years.

In the next update, we’ll show you the environments that Henri has been toiling on for the past few days. He did make the special map icon that glows when you point at it. Technology! 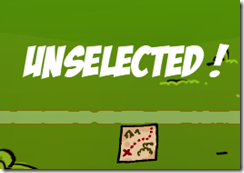 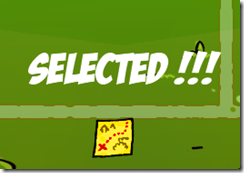 (Not suitable for the graphics-obsessed or people with allergy to code !)

Is he gone? Good, I don’t like him very much.

A lot of my programming time this past month has been spent optimizing the game engine, as it soon became apparent just how bloated the code had become in some places. Worse, I came upon a nasty memory leak that caused about a 2 MB increase in memory consumption per second. That’s pretty nasty even for a AAA 3d-enabled processor-destroying game, much less for a 2d game like we have here.

So the result was that I dived into all my code, and completely rewrote the parts I thought were poorly written (about 75% of the code), and the result is a leaner, faster game that consumes about half as much memory as previously and runs a lot faster. And best of all – no more memory leaks!

I’m currently programming a whole new level system that will enable me to quickly prototype the game events (story and battles, basically). After that, I plan to get started on the inventory and equipment system.

That’s it from me then, fellas. For any queries, comments, criticism, or maybe if you would like to help out in some manner, don’t hesitate to contact me!

Good stuff :-) Out of curiosity, how did you check for memory leaks? Just system monitor/control panel ?

Task manager and System monitor are good for checking general memory consumption. For specific checks (such as which thread/object is causing the leak),I use the analysis tools built in Visual Studio 2010.