Info on the upcoming URR cities and what other updates and releases are approaching in the next month!

Posted by UltimaRatioRegum on Dec 4th, 2014

I'm planning to release Ultima Ratio Regum 0.6 - after seven months of fevered development - in the next two weeks. Ideally on the 13th of December, possibly on the 20th of December if not.

It features massive procedural generation of the world's settlements, ranging from small farms, towns and hunter-gatherer settlements, to fortresses across the world deserts, to vast cities of immense size. Here’s a very zoomed-out image of city for you, approximate population ~300,000. Pretty nice, right?
. 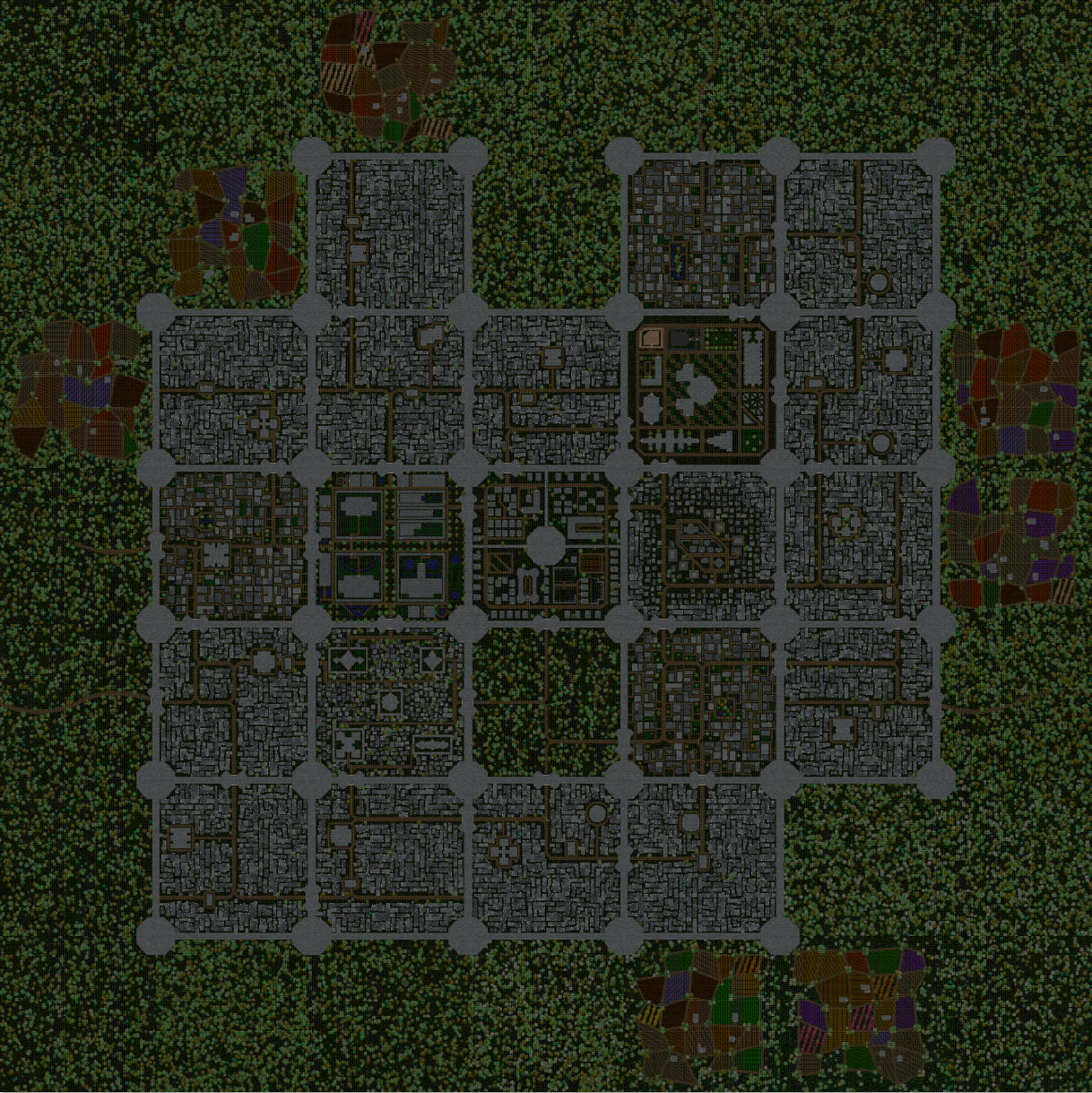 .
City FAQ:
.
Q: Why so square?
.
A: A deliberate choice – districts in foreign cities cost cash to enter, and the selection of which districts to explore and which to ignore is part of the strategy-layer gameplay.
.
Q: What are the districts?
.
A: The dense districts are lower-class housing; the less dense are middle-class housing; the special district near the top-right corner is the city centre, containing embassies, a mint, a parliamentary building, etc; then the row of three special districts in the middle are upper-class housing (where the player will begin), a military district, and a market; the district near the bottom-left corner is a religious district with a range of religions represented, and the blank district is the castle, which is effectively an “interior”, so that is coming in 0.7.
.
Q: How big actually is this?
.
A: Each district is a single character on the world map, and 200×200 tiles, so the city is around 1000×1000 tiles across, and has enough housing to support approximately ~300,000 NPCs (coming in 0.8)!
.
Q: Will I be able to enter every single building?
.
A: In 0.6, no, in 0.7, yes, from 0.8 onwards, only if you have the right key.

Will there be any larger settlements with less closed of districts, forming more natural formations, with housings outside the city walls, or perhaps with districts spanning multiple squares, providing a less fortified look?

On a sidenote, this sort of fortified look reminds me of a documentary I saw of a nation which existed during the golden age of Rome and Egypt, that was confined within strong castle walls, and hard to reach. The nation emphasized brotherhood, with an interesting religious twist, which ultimately meant the end for the nation, as it fell victim to an internal conflict. I can't however for the life of me think of the name of that civilization. any history nut here who might be able to help me think of the name of it, or point me in the right direction?

Cities are the largest settlements - towns, farms, fortresses, hunter-gatherer settlements etc count as one "map grid", each square here is one map grid also, so cities are normally no larger than 5x5. As above, the less natural formations are for the sake of gameplay and decisions for moving between districts, but some cities do "spill" outside with slums, for instance. I might let some housing districts merge into one another if two of the same type are contiguous; I'll have to see how that looks...

On the sidenote, that sounds fascinating! I like to think myself fairly competent on history but I cannot imagine what that was. If you find it, let me know, I'm always on the lookout for more weird ways to add variety to URR's civs.