In this post, we give you a look at Synapse's concept music, a couple of prototype screenshots and the latest episode of our podcast Visiting the Village.

A very chaotic week this week, as I’ve recently moved house which is always horrifying for anyone working on, well, anything! 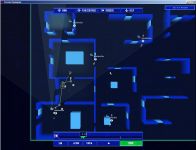 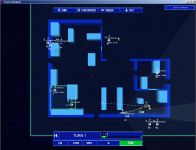 That doesn’t particularly do them justice (they look great when you scroll around), so I’m sure they’ll feature in a forthcoming video.

I’ve been working on the first actual in-game music this week: it was pretty much all I could do when I didn’t have an internet connection (thanks BT!). This has been quite challenging as I’ve had to set up my studio in a brand new room and the monitoring situation is less than ideal. I’ll be doing some much more in-depth posts on the music soon, and I’m hoping to do some writing in various music tech mags about the project.

The style I’m going for is a mix of stereotypically cyberpunk influences (the electronica / drum and bass of Ghost in the Shell meets some bigger, more euphoric Vangelis-style sounds) with some orchestral stuff, then some dirtier lo-fi 8-bit chip stuff underneath. I wanted to take all the electronic influences I love and then wrap them up into an interesting bundle. Production-wise, this is very challenging: I’m currently experimenting with an overall sound pitched somewhere between a super harsh, over-punchy Noisia type brickwall limit and a more spacious soundtracky feel. I sometimes feel that modern game soundtracks lack the punch and aggression of dance music: they’re more influenced by big film scores, whereas I (in my youthful idiocy) find myself wanting something more in-your-face.

I was quite interested in Sascha Dikiciyan & Cris Velasco’s score for Prototype which uses a lot of found sound and weird string articulations: I need to build a bit more of a library of weird metallic sounds to get that influence in there.

Anyway, here is a quick bit of test concept music I did when we were in pre-production. It’s pretty rough in a lot of ways but might give you an indication of what we’re going for. I played this to legendary game composer Richard Jacques in his hotel room in Germany (long story) and he said, “Really nice production”, so I must be doing something right…Apologies for the shitty Garritan strings - I’ve since upgraded my orchestral libraries to non-shit ones!


Ian is continuing to work hard on the single player - the conclusion we came to after trying loads of different game modes is that we need to have an AI-driven SP with emphasis on broad attack and defence missions. We’ll still try to get some of the cool aesthetic stuff (like assasination etc.) in there if humanly possible, but the game doesn’t work well with heavliy scripted scenarios. It’s more like a fighting game: it’s all about defeating your opponent at close quarters rather than exploring areas etc.

PR is going well as I’ve recently completed our first PR list with around 800 sites and journalists on there. I’m hoping to get our first “announcement” release out soon with some of the concept art to bring people on board with development, following what we’re doing and listening to our podcast.


If you’re enjoying our updates and this preview of the game so far, please tell other people and encourage them to come here. Following me on Twitter is a good way of getting insta-updates through the day if you’re excited about Synapse. Thanks for your ongoing support - it means a lot as it’s so hard to get quality publicity for an indie game these days: there are so many of the blimmin’ things around!

For SP, you could do something like weapon restrictions(stun only) or maybe not getting detected(stealth).

Looks good btw! Maybe make the floor a bit brighter or a diffent color, I ofcourse don't know how it looks ingame but it seems pretty dark.

Interesting SP gameplay ideas, thanks. We haven't really done colour balancing yet so yeah it does look a tad dark at the moment.