It has been quite a long time since we last gave you all a general update of how things are going due to the fact everyone has been working so hard on content for the next release. Things are calming down for some of the team as their projects are completed, giving us ample time to update you all on what is going on within the First Strike Team and Community.

It has been quite a long time since we last gave you all a general update of how things are going due to the fact everyone has been working so hard on content for the next release. Things are calming down for some of the team as their projects are completed, giving us ample time to update you all on what is going on within the First Strike Team and Community.

First off we'd just like to comment on the EA/DICE/Punkbuster bug issue that has been plaguing our mod, and in fact the actual source game BF2142 since before Christmas. We're quite annoyed that EA, DICE or Punkbuster have still yet to resolve this problem. The problem we speak of is an intermittent lag/framedrop/freeze which some people get which makes the game almost unplayable. It is a global issue, everyone seems to have it to some degree. Restarting your game tends to get rid of it, but it returns in time. We'll be looking at ways to combat this until the powers at be deal with it. We'll be experimenting with disabling PB on some servers to see if that alleviates the problem. If it does we'll let you know, and run our servers in this fashion until the bug is fixed. We'd also like to make it clear that this bug is not a problem with the mod, but an issue at EA's end that they have to rectify.

With the team gearing up for a new release, we are in serious need of more developers to help out. No matter your talent, be it coding, skinning, modelling, mapping or even Music Composition, we could use the help. If you're interested in joining the team please let us know via our RECRUITMENT FORUM (Forums.fsmod.com), please note that evidence of previous work WILL be required.. We are in need of some BETA TESTERS, if you are interested in helping out with our beta team, read THIS form.

The FS Dev team has recently renewed the apprenticeship program, where we take on people with some basic skills and they get assigned with tasks which improve their skills, give them vital experience and also benefit the mod through their work. Currently there are two apprentices on the team and both have been hard at work fixing some of the long-time bugs that have been in First Strike and also doing some small work in improving some of the content for the next release. The team is willing to take on more apprentices, however be aware that it will be MUCH harder to get into this position than it will to apply as an experienced Developer due to the fact we have few people with the time that is needed to mentor and we have more need of experienced people.

Our apprentices are hard at work, and like good mentors we want to make their lives miserable. Please help us out by reporting any bugs that are in the mod so we can task these guys with fixing them. If you have spotted anything in game which looks out of place or think something isn't working right, please post it in our BUG REPORTS forum. If the bug is possibly game breaking, or you do not want to register a forum account, then please send the bug details to the e-mail address FirstStrikeMedia@gmail.com.

Unfortunately, the Shattered Planet community is unable to continue hosting the First Strike Community Events, however the BlackIntel group have stepped up again and offered their services as the Community Night server. We would like to extend our thanks to Shattered Planet for supporting the mod, and it's with a tear in our eye that we see them go. The BlackIntel group have agreed to appoint some more community admins to help moderate the games rather than just having their own members in control. We appreciate this move and look forward to the games this weekend! Don't forget to come online at 8PM GMT (3PM EST) this Saturday and Sunday!

Recently First Strike's Lead Coder and Development Leader, Imperial, has resigned from his position due to lack of time to commit to the mod. There was recently a meeting of the First Strike Team and we have the following changes to announce:
TALON has now been promoted to Dev Team Leader and is in charge of handing out assignments to developers and establishing deadlines.
Twigs has been raised to the position of Assistant Team Lead to handle the Distribution side of beta content and also working as our new coder.
Gwynzer has been dragged into the position of Testing Team Leader, he'll be conducting all the testing sessions and he's the man to see if you have any questions about the testing team.

Finally after ingesting all this information, here is a little eye candy to help wash it down. The first in a series of screenshot previews showing off the new Jundland Wastes map. 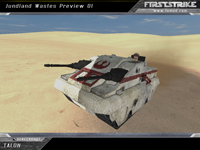 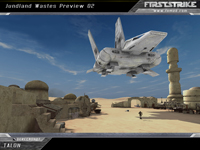 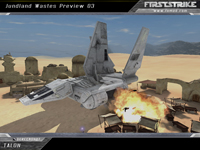 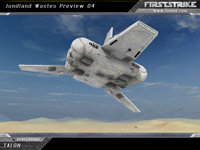 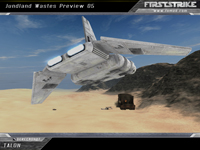 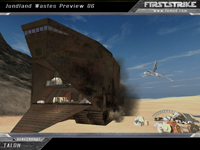 Stay tuned for further updates on as we approach the eve of our next release.

Thanks, really looking forward to getting this out there for you guys to get to grips with. Almost there now.

Ah yes, PunkBuster... I never really considered it an effective cheating deterrent... Honestly I think it causes more problems than it solves, and gives players an unnecessary requirement for joining most servers... It's a royal pain in the *** and I hope they either shape-up or SHIP-OUT!

As for the mod, I love the work you guys are doing and I cincerely hope you find some way to combat the annoyances PunkBuster has YET to fix...

Thanks, yeah, for the moment we're running servers with PB disabled and this seems to solve the problem for now. The only real issue is that our stats don't record unless PB is enabled, but that is a small price to pay for being able to play once again free of that terrible intermittent lag. Once they fix it we'll get it all up and running again.