Ambient sounds implemented. This allows for placement, effective radius, volume, and falloff. A small example is located at the dock to the south of the starting farm.

Phase I of the default campaign is complete. It consists of 4 short quests, centered around a farm, that are designed to introduce several aspects of the game (planting, gathering, and crafting). The quest system was fleshed as well for this release. Implemented a quest item flag, as well as crafting and planting quest objectives.

Here is a screenshot of the new starting area: 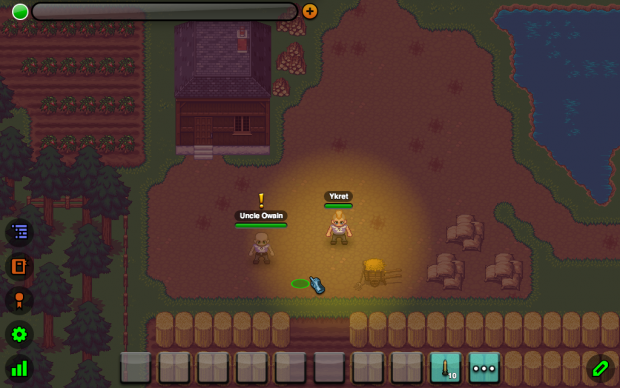 Items on tap for 0.4.7 include completing the ambient sound editor, and implementing a temporary guest login feature for those wanting to take a peek at the game but are not quite ready to register. Phase II of the default campaign should go in, leading the player to the regional capital and introducing them to combat.

For an added bonus I put together a short video detailing an interesting aspect of the game: Campfires. Campfires can be crafted and placed by the user. They can function as a crafting station for the cooking skill and must be fed fuel to keep them going. They can also be extinguished with a bucket of water and will melt any snow that they are placed upon.