The Rise of the East is a modification for Wildfire Games' 0 A.D. that strives to bring China as a civilization into the game, meticulously researched to be as historically accurate as possible. In addition to the civilization, we plan to implement a full campaign featuring recreations of famous historical moments, new random maps and other additions to enhance the gameplay experience!

Today, we are proud to announce the first design team dedicated to 0 A.D. Scion Development is a collection of ambitious developers and game enthusiasts who have come together to develop third-party content for Wildfire Games' real-time strategy title. Our group of talented, tight-knit designers donate their free time to development with a common goal in mind: to contribute to the 0 A.D. community and further the limits of the game.

After extensive construction of the team's logistic aspects, we are thrilled to announce our debut project, The Rise of the East, introducing a brand new faction to the game: China. As a team, our mission is to deliver quality modifications and scenarios to the game community, all while adhering to a policy of high expectations and strong work ethics. Through our dedication to development, we hope to become an integral part the 0 A.D. community.

At the moment we are open to any person willing to contribute to the team, particularly those with artistic abilities or those who possess some form of experience with Atlas. Obviously, anyone wishing to join must have a genuine passion for mod development and must be able to actively contribute to the team on a regular basis. If you think if you have the mindset, and more importantly the skills to become a part of our team, fill out and post an application form in our forums, the form and job descriptions may be found at this thread.

The Rise of the East is a modification that strives to bring China as a civilization into the game, meticulously researched to be as historically accurate as possible. In addition to the civilization, we plan to implement a full campaign, featuring recreations of famous historical moments, new random maps, and more. As development progresses, we will periodically update the fans with the latest news, and release promotional media although it will take some time before the entire modification is finished. To commemorate our debut, we've released a small unit pack to give the fans a preview of what is to come, which can be downloaded below. 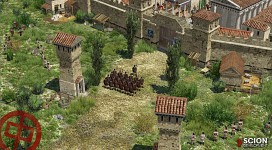 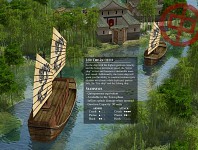 Follow us on our official Twitter for the latest updates and news! Also, be sure to stop by our forums and introduce yourself to the community and the rest of the team. We'd love to hear from you!

Below, you can find a small demo of our progress so far. We've included three infantry units from our Chinese faction in this demo release: DÄo FÃº ShÇ’u (åˆ€æ–§æ‰‹, infantry swordsman), ChÃ¡ng MÃ¡o BÄ«ng (é•¿çŸ›å…µ, infantry spearman) and NÃº ShÇ’u (å¼©æ‰‹, infantry archer). We've also released the BÄ«ng YÃ­ng (å…µè¥, military center) so you'll have a building from which to train your three new units.

Hmmmm 刀斧手 is an axeman, wikipedia points 刀斧手 to the Roman Lictor. Also the Chinese writing on the side of this page is kinda random.

And which era of Chinese history is this? Middle Kingdom's history is way too long not to specify an exact period.

Hey Janshin! To be perfectly honest with you, we don't have any Chinese-speaking members on the team. I would wager that 99% of our characters are mis-matched in one way or another. We could use someone to help us solve this problem though.

Our mod spans from the mid-Warring States period to the Jin Dynasty, focusing mainly on Han China. Thanks for your feedback!

I'm Chinese and I can probably provide information about this era. While, generally, no Chinese army I heard about use Axe, short melee weapons are mostly useless for the cost of them will arm more men. Simply, no men rush into lines of 3-7Meters long pikes with short.

I am pretty sure axeman didn't exist in Chinese military until periods after. You should probably look into ge (dagger axe) wielding infantry.

There are pretty good videos on Youtube with Chinese armour and weapons broken down by period. For example:


Probably should copy the infantry classes from the Qin dynasty with additional emphasis on cavalry for the Han dynasty, since the terracotta soldiers and subsequent documentaries provide a lot of information.

Thanks for your input! Just to set the record straight, we don't actually have axemen. :p

Just a quick note on the architecture: being that this is a game, there is a slight degree of trade-off between appealing to the player and appealing to historical accuracy. Though we are doing our what we can to ensure that our architecture is a fair representation of what existed at the time, we also need to visually diversify them so they are easily recognizable at a quick glance. For example, not all military buildings in the last several millennia have been 'U'-shaped, but it has developed into a fairly common stigma in RTS games, and we seek for the player to recognize our buildings before they've ever seen them.

Anyway, thanks for the links!

Here's some pictures of different armors through out the eras.

Seem to be taken from a collected anthology by e6studio, which is renovating their site right now. The Three Kingdoms are there as well as various others. The Song Dynasty Armor is badass.

Though I do gather information from the ChinaHistoryForum often, much of the information in that particular thread is not relevant to our time frame (roughly BC 500 - 400 AD).

Reminds me of Age of Empires 3 :D