A mod for Diablo 2 with expansion The Lord of Destruction which tells an alternative story.

3,5k views and an anniversary of one month. Sounds like a day well-suited for releasing information about an interesting feature. 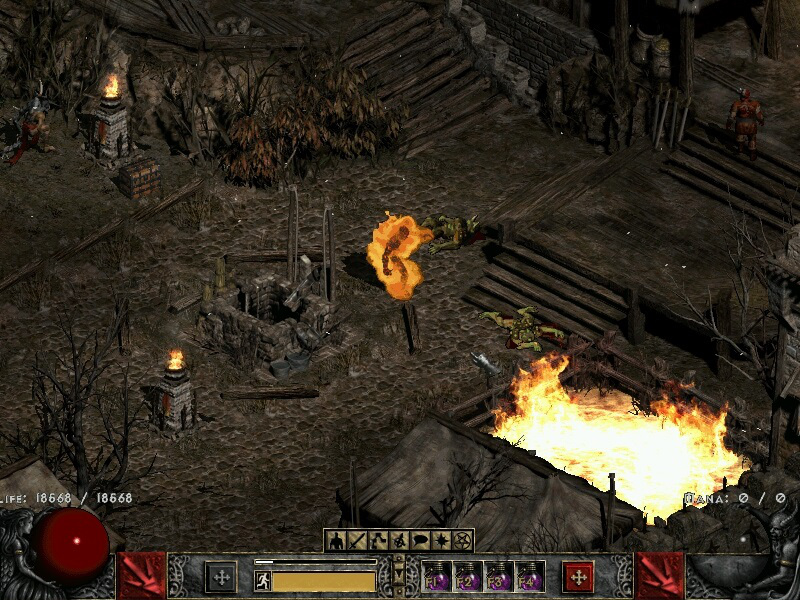 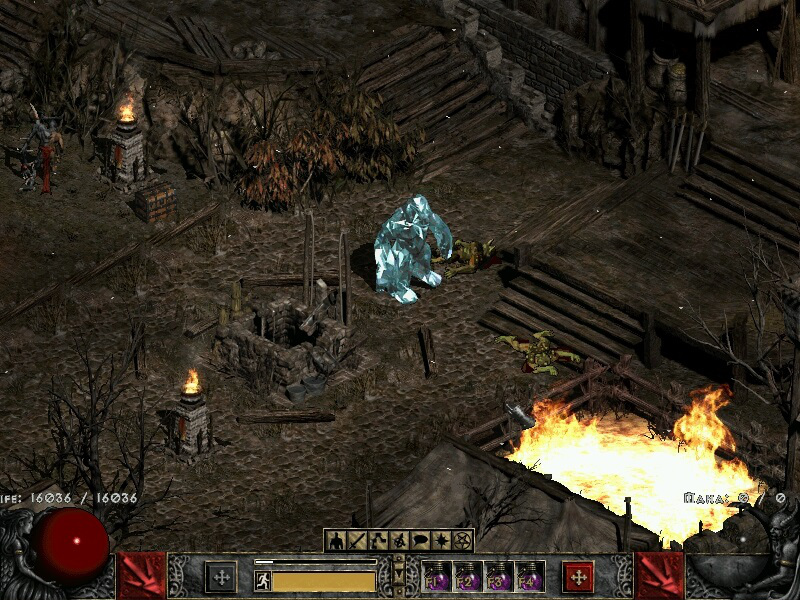 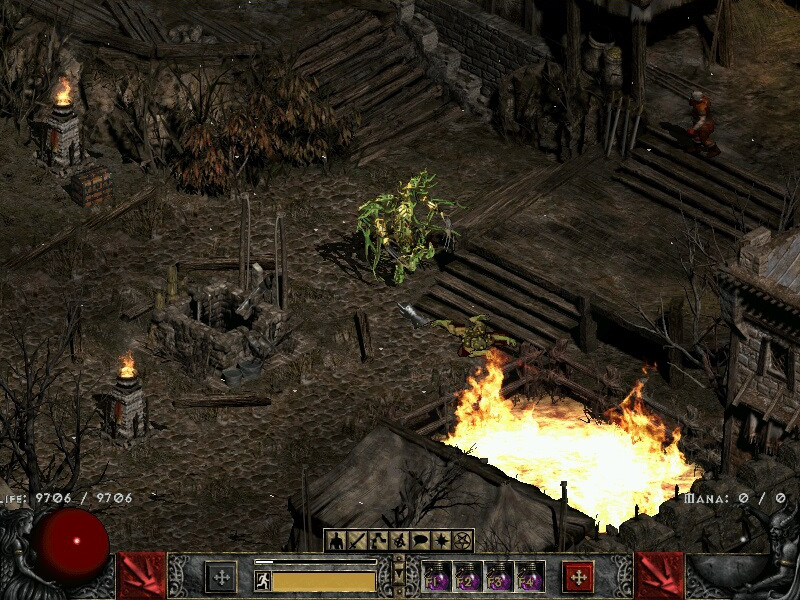 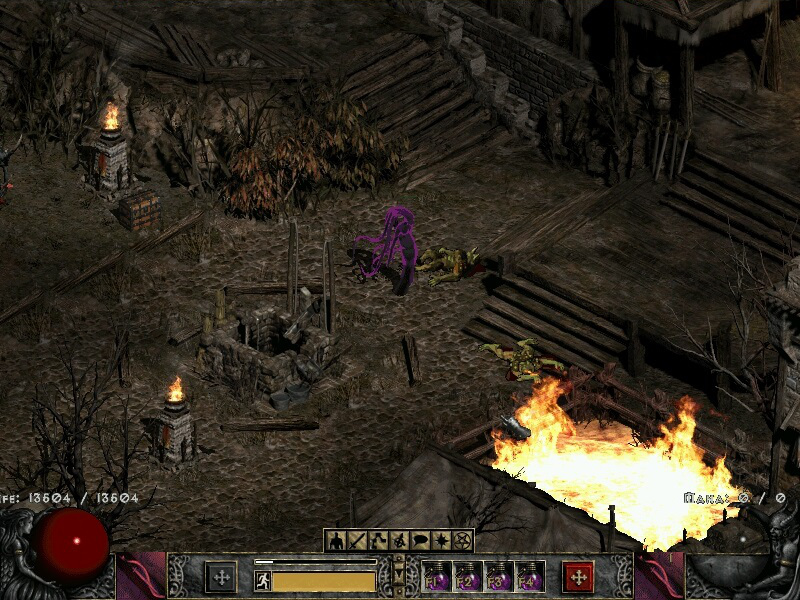 The Puppeteer isn't just a story mod with higher difficulty. It’s a full conversion (kind of ?). I mean not full conversion in sense of enemies' formation, which it, kind of, is aswell, but I mean something else. I mean in sense of characters' skills, and, perhaps even in characters themselves. We could say that there are new playable characters, though it is made trough quite a silly method available to any average modder. So I wonder why nobody made it yet (at least I don´t know about anyone).

As, by the story, at the end you fight against quite a higher league enemy, so, you got to even the odds, right ? Well fortunatelly, there are a few guys who are kind of pissed about the things the dude you fight against does, but are quite lazy and don’t feel like doing the work themselves. Well, here you, the player, are.

Right before the final battle, you get to change your character/class. No kidding. At this point it ceases to matter which character you created your save with (though melee character, which had it harder until now will have advantages now, due to more life with new class). You will get to choose from 4 characters. They all have their own, unique skills, although, much less of them. These new classes got only a single build (not anymore), their skills are all pre-set and cannot be anyhow improved (false since release of expansion), or the skill level increased. Unlike the normal character skills, they do not use mana, thus, their mana is 0. Instead, their skills are divided to infinite and limited.

Infinite skills can be used without any restriction, all the time. Limited skills are the more effective skills, however, they activate cooldown. This cooldown activites globally, on all skills that cause cooldown, leaving you only with less effective, infinite skills. The player has to think and decide which skill when to use, otherwise you are left weakened for a few seconds, causing ensured death, as, although you are much stronger and have a bunch of life, from here on, the battle becomes extremely hectic.

Unless you become one of these character (it is done manually by obtaining required items and then crafting) you cannot defeat the enemies at the end, as they are impossible to cause any harm to. As it is written in the story, even Diablo could not defeat even a simple grunt due to their defense spells causing all attacks to simply pass trough them.

That is however not enough to defend against the representants of each element who are the elements themselves. They call themselves „The Eternals“ and are the characters the players will choose from before the final battle.

As they are the elements themselves, you cannot possibly harm them with their own element. Instead, trying to harm them with their element will result in them absorbing all the magic resulting in healing. However, the same way they heal from being damaged by their element, they are vulnerable to the opposing element which they receive even extra damage from. Enemies use all 5 elements, be wary and evade your opposing element's attacks. (Poison isn’t an element, I don’t even know what it is meant to be.)

Flame of Rebirth represents the fire and the cycle of death and rebirth. In some cases he was appearing as a bird surrounded by flames, creating the legend of the phoenix. His favourite form is however, the simple one, a humanoid set ablaze. He fancies melee battle and in his rather small form he's capable of extremely fast movement, though he is quite lazy and prefers not having to move too much.

Although he likes to fight face to face he is capable of ranged attacks. His powerful wave of fire is extra effective the closer you are to enemy, Daystar causes a massive explosion, but exhausts him. His healing skill heals over period of several seconds and his buff offers some extra damage.

As a representation of rebirth, his life is the highest from all Eternals. However, to render his enemies vulnerable, he has to hit each of them, by melee attack. Flame of Rebirth is rated moderate on difficulty. His health and damage are high but he has to keep moving all the time and has to fight in melee range, or at least enter it to deplete enemies' resistance.

The Iceberg (or his other name The Cold-hearted Judge) is the ice Eternal or also the one „worthy of judging“. The Iceberg is merciless and although his nature, very active. He has a strong sense of justice and need for self-improvement and despises any who do not (thus his constant conflict with fire Eternal due to his lazyness). Iceberg is generally very aggresive and rather rude to anyone who does not live the proper way.

Iceberg plays safe in battle. He relies on his ice barrier to block most damage. He can unleash several freezing projectiles which when all hit a single target deal solid damage. He can freeze the time, rendering enemies slowed to minimum speed aswell as making them less resistant to his attacks (however, he has a chance for casting a curse when struck and on hit which lowers resistance more than time freeze, but the skills overwrite each other). His healing is instant and powerful, but exhausting. His strongest ability is however, The Absolute Zero. After activating it, it decreases the temperature around him. All enemies around him are rapidly damaged over time, resulting in massive amount of damage if high number of enemies are caught in the range. However the skill is very exhausting and has long cooldown.

The Iceberg is rated low on difficulty. He is resistant, capable of strong defense and healing. His damage is a bit lower, unless he turns on Absolute Zero, but he is capable of wearing down any foe.

Sage of the Ages (or the Marching Happiness) is the Eternal representing light. He has a powerful aura which obliges all lower life forms to behave in a peaceful, harmless and friendly way. Under long-term effect, the aura completely purifies beings of all desires to a state which does not just cleanse any sign of aggression but even the slightest mischief.

His Tri-light skill ensures there will be light everywhere. Along with Lofty Dance used also by your enemies, these are his infinite skills. Holy Flare causes an aura of light to shoot out from him, causing high damage in wide area. His Limit curse makes enemies vulnerable to attacks and halves their physical damage. His triumph is, however, his Beacon of Hope. Any ally in range will have his damage increased and, should the enemies dare to destroy it, it obliterates everything in range (contrast to his friendly and happy personality, this skill of his is the highest damage skill from all Eternals). He can purify himself with his aura skill which increases his natural healing.

Sage is a ranged, magic based fighter. He prepares for battle and keeps his distance. He also is, however, the most vulnerable of Eternals due to his low health and no protective skills (except for Lofty Dance which, however, does not increases defense but only allows to elude attacks). Sage of the Ages is rated moderate on difficulty. With good timing you can deal massive wide area damage but his health is low and he has to constantly stay away from harm. To heal a severe injury he has to leave the battlefield.

Ruler of the Abyss, the youngest Eternal is a god-made entity. He is a hybrid of the other 3 Eternals and the Divine One himself. He apparently has no emotions or personality but he does act and decide independently. After having been made as God's attempt to prove that if Eternals do not wish to join him, he can mass produce entities of equal power, he simply refused to follow orders, left, and joined the other 3 Eternals.

His skills ressemble skills of those he was made from. Absorbtion is a melee stacking attack which adds lifesteal, move speed and all magic damage reduction, maximum is 10 stacks, and they take 30 seconds to lose. No matter what, keep these stacks up. However, for the lifesteal to work, you have to be able to deal physical damage to your enemy. For that the Ruler has a curse to deplete it. Ruler is missing a healing skill. To heal, you have to use the Ultimate Messiah skill. Similiarly to Iceberg's Absolute Zero, this also deals massive damage to all enemies in range, but in addition to that this skill drains all that health, and gives it to you. It's extremely effective. However it is active for a short time, causes you to get middle-duration cooldown, and works only if your enemies‘ are vulnerable to physical damage. Meaning you cannot run from battle and heal in safety. That isn’t everything though. The Ruler uses physical damage primarily for healing. When he really wishes to deal damage, he has to switch to magic element. He is obviously capable to break the magic immunity to do that. His first skill, Repercussio comes from Apostasy. It shoots out multiple dark projectiles. Each of these counts the area for the amount of enemies present, and then each of these unleashes a high-speed copy of itself against each living enemy, resulting in auto-aim. When you face a crowd of enemies, your screen changes into a lake of these projectiles. Effective against crowds and has almost instant cooldown. Sometimes however, you got to keep them all further away from yourself. For that you have God's skill, Forbidden Sense. It unleashes a wave of dark energy which attempts to drag your enemies along with it. If it succeeds it will pack damage on your enemy again and again while dragging him away.

Ruler of the Abyss has extremely high potential to be the strongest Eternal, but having to switch between magic element for higher damage, physical element for healing, and keeping up stacks for protection and move speed will certainly put some pressure on the player. Ruler of the Abyss is very likely the most difficult Eternal to play, thus the only one rated challenging on difficulty.

Although it is quite a big change, everything for each Eternal is obtained from a single set. To find out how to become an Eternal and which items you need to collect to do so, join the Discord server which contains detailed guide. Thank you for playing the mod !