Year 2552. The Earth is no longer habitable since year 2401 due to the atmosphere collapse and temperature rise in planet Earth. Human race has been forced to live in the different colonized planets into the Solar System. This was called "The Second Exodus". After the "Enceladus Atmosphere Implementation Program" (EAIP) succeeded in year 2295, Saturn's moon ENCELADUS turned into the most important human colony into the Solar System altogether with Titan's. Even though the extreme cold conditions are still uncontrollable in a 40% of Enceladus, there's liquid water produced during the EAIP in a almost a 35% of its surface, enabling the proper ecosystem for human being subsistence and many other life forms... Due to its perfect gravity conditions (very similar to the Earth's) after the EAIP, ENCELADUS colony became a planet of interest to Aperture Laboratories to develop its more ambitious testing program, The Enceladus Initiative. 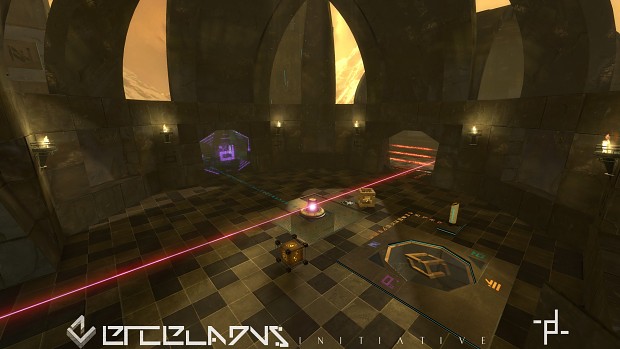 I do like the artistic direction of the temple, although I'd recommend changing the models of the normal buttons and light sensors. Imho they don't really fit with the temple's style.