Welcome to Star Wars Mod: Galactic Warfare, a modification for Call of Duty 4: Modern Warfare. All began with a new 3D-model, and soon the idea to extend this theme as a non commercial fan project was born. In the meantime, our project is taking shape and we have found a couple of new comrades in addition to the team already involved in the development of Apesgorod. It's our goal to unite our favourite game CoD4:MW with the classic universe of Star Wars, as the best trilogy ever. With this total conversion we will combine lot of the known battlegrounds, characters and weapons of Star Wars with the fantastic gameplay of the COD4-Multiplayer. Either as a trooper of the Imperial Forces or as a soldier from the Rebel Alliance you will fight on some different locations. 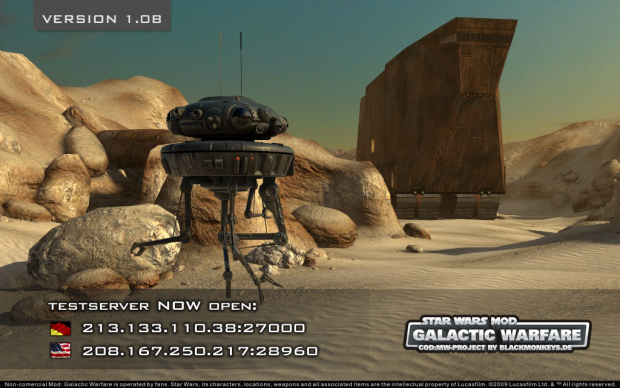 That Imperial probe droid could probe me any day... ^_^! That's one sexy-*** robot! Look at that shine on the model, gorgeous...

my little pony friend ship is magic pinkie pie? (your picture, and yeah i watch that show even though i'm 17 and a guy :D)

Hahaha, it is quite a nice model, LOLZ :3

does this work with bots

News will follow. Feel free to join us on the server.