Star Wars Battlefront III Legacy is a large-scale conversion mod created for Battlefront II using as many recovered assets that are available from the cancelled game Star Wars Battlefront 3 by Free Radical; including both eras (Clone Wars and GCW), a brand-new HUD+Interface and a few converted maps such as Coruscant, Cato Neimoidia, Bespin and Dantooine.

This time you can play as Darth Vader, Rahm Kota or Han Solo, fly a Tie Fighter, X-Wing or fight alongside the 501st, 442nd or 327th Legion on 4 converted maps from Battlefront 3: Coruscant, Cato Neimoidia, Bespin and now....Dantooine! Two eras are available this time: Clone Wars and Galactic Civil War. You can play as any hero in Hero Assault as well as any clone legion you want using Fake Console to browse through your preferred clone legion. New animations, voice lines, music tracks, vehicles, maps, characters, weapons....have been added to this Beta. Now it's on you what you do on the Battlefront. Here you will sense the real Pride and Accomplishment by instantly joining and fighting across two eras as any unit, hero or vehicle you want to play. May the force be with you and may this Beta stay as long as possible inside your Addon folder.

Open Beta 4 has finally been released and fixes tons of bugs, crashing issues, glitches from the first three betas. Also one new map has been added (Dantooine) as well as one new era is completely playable (Galactic Civil War).

All maps have been improved but some things are still not finished/fixed. The final version WILL cover 99% of all issues you have reported to me/us.

The download also comes with a ReadMeFIRST.txt...which you have to read to fully understand the installation process, why certain things might not work and how to solve them.

With Beta 4 we are going a HUGE step forward to the final version which will add more maps, a new era, a campaign and a reworked Shell Interface for the old Battlefront 2.

May the force, the pride and the accomplishment be with you...Always! 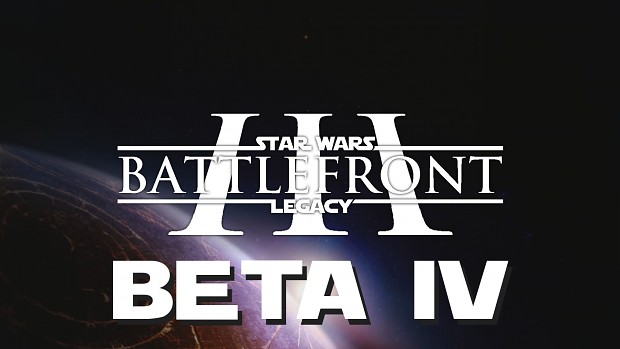 Lol, pretty much.
Meanwhile while I await the next demo for this mod, I am also awaiting the release of Battlefront EA II's Season 3 expansion. :P

Thanks for making my day

Do I need an older version of this mod pre-installed?

For some reason Coruscant always crashes but the rest is doing fine.

This is the only mod that lags for me such a shame.

Well. It's quite a big mod. I never seen a mod this big for SwbfII

congrats on the release bud (: keep up the good work

quick question is it multiplayer compatible with disneys patch?

Yes, their patch that re-added multiplayer.

even tho its not disneys it's GOG's patch

It is. Disney reactivated the servers for the Steam editions.

so disk users are ignored?

i still find this hilarious

Finally! Can't wait to dive in to this awesomeness!

This mod is really coming along i'm proud of you.

Wow, a fourth beta version already? Times goes by quickly when you are having fun. Nice job with the recent additions of the Bespin & Dantooine maps El Fabricio & Anakin, are their any other planned maps that will be added in the near future?

Thanks. Recently I posted some WIP pictures of Starkiller Base (In 3D Editor) and some leaks/rumors say a lot about Hoth and Endor, Invisible Hand and Tatooine.
Starkiller Base will be the last map, however from time to time I work on this map since it's a 100% custom map and not converted.
Oh and then there's Space: Deathstar II which is not in developement ATM. DSII will only be a mission like map and I think most people already guess what's going to be the main goal there :D

Sounds like an interesting concept, can not wait to see what it looks like next year! Also, I hope you do not mind but I decided to do a tutorial video on how to install your Battlefront 3 Legacy Mod since some people may not be very good at following written instructions but may be great at following a visual instruction. I hope that is alright with you.

So Space Death Star II is just an instant action mission. Not part of the campaign I guess? (I haven't played the actual elite squadron game)

both, at least on psp version
in campaign it's a mission
in I.A (instant action) it's a map

can you put war soldiers for all legions ??

You wouldn't rather have Thorn for the Shock Troopers

So I go to instant action and add some maps from this mod. Then I start. And then my game disappears and my mouse is gone. I have to task manager it off. Why is this happening?

I turned off v-sync, that helped me.. second idea put headphones in your microphone slot.

If you're doing this on the Battlefront II Ultimate Pack, you may want to open the game from Star Wars Battlefront II/Gamedata/game32
Always works for me. If you don't have it installed, I don't know how to help.

Well done!
I will definitely try this ASAP :)

when i downloaded it, it came up as unreadable and in an unknown format. Also, there was no read me first text. Also, is it meant to be in a folder? mine did not come in a folder. can someone please help? Also, i am using windows 10, is that the issue?

Download WinRAR or 7zip and your issue will be pretty much resolved.

Damn this version looks awesome but I got some crashes, one while trying to load Dantooine supremacy civil war and the other when a Venator was going down on Bespin..

Could also be my BF2 version being a little messy, I'm having the ultimate pack installed but I did put the files into the right directory

Sorry the picture is of bad quality, but THIS happens with the B2 droids. I'm not sure if you know about this bug or not. :)
Photobox.co.uk

I had downloaded the zip and extracted and I see the maps on Instant Action but I dont see any Eras, or modes to access. I am looking at the install requirements and I am either skimming past something or somehow ignoring another key factor as to why I have not been able to see the modes or eras, any reason for this?

Pretty sure you have to get the 1.3 patch

I have a sense of pride and acconplishment by simply playing this mod.

Ever since I got this mod I can't play the game anymore. I said in another comment "So I go to instant action and add some maps from this mod. Then I start. And then my game disappears and my mouse is gone. I have to task manager it off. " I just realised now that I can't play any maps at all. Someone help me

I need help my game is broken now

Excellent mod! Just one minor suggestion: on the screen you get when you open Battlefront 2(the one with the Star Wars Main Theme), maybe you could replace the Battlefront 2 logo with the Battlefront 3 Legacy logo. Just an idea, either idea works just fine.