A TC for Spear of Destiny originally released in February 2007, Spear Revisited was my fourth released project and my most ambitious ever at the time. Spear Revisited has 21 levels replacing all of the original maps, including two guest levels by thejosh and Brian Lowe, and numerous graphics and source code changes. The mod was also one of a new generation of mods running on extended versions of the original Wolfenstein engine--in Spear Revisited's case, the Wolf4GW engine, which extended the 640k of memory available to Wolfenstein to 32MB, allowing me to remove many of the limits constraining Wolfenstein level design. Almost eight years after its original release, Spear Revisited has been re-released for the ECWolf source port, with some extra graphical polish, enhanced, deadlier bosses, and a remastered soundtrack in the highly efficient Opus codec.

Spear Revisited's ECWolf port has now been released. Enjoy this classic 2007 Wolfenstein mod with all the convenience of ECWolf, including native Windows support, high resolution, and two-button strafe like in Doom!

This is mostly a straight port of the DOS4GW original, except for some minor cosmetic changes and the addition of near CD-quality music in the advanced Opus format. Opus is a new lossy audio codec that is much more efficient than mp3 or Ogg Vorbis--a 56 kbps Opus file is similar in quality to a 128 kbps mp3. Requires ECWolf 1.3 and a valid copy of Spear of Destiny to play. 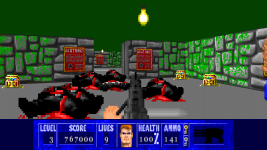 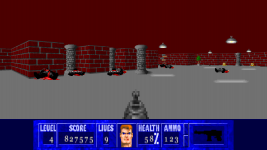 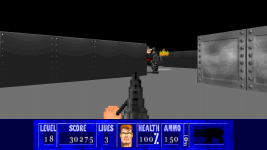 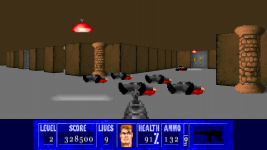 The ECWolf version of Spear Revisited. Requires Spear of Destiny and ECWolf 1.3 or higher.

The original DOS/4GW version of Spear Revisited, from February 2007. Can be tricky to get running with DOSBox due to the behavior of the DOS extender.