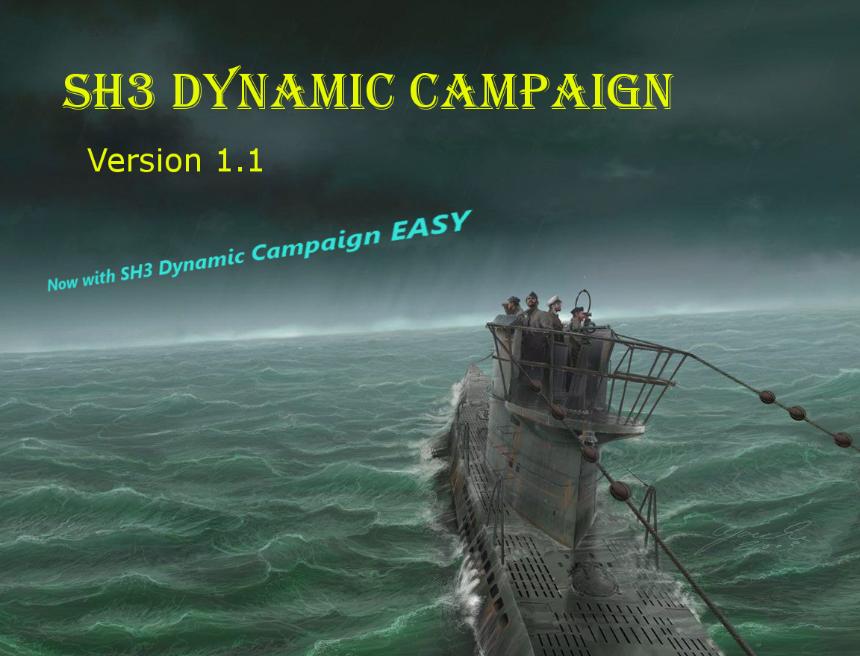 SH3 Dynamic Campaign finally gives Silent Hunter 3 a dynamic
campaign. This means when ships are sunken they will no longer appear
within the campaign. If they are just a generic tanker or if they are a
renowned capital ship, that generic specific tanker or all the instances
of that capital ship will no longer appear within Silent Hunter III
within that specific career.

5. Inside the "Installer" folder click Install.bat. Follow instructions to install SH3 Dynamic Campaign. If you have SH3 Commander installed, it will ask you about that too.

How to Play SH3 Dynamic Campaign:

1. If you want to use a fresh/new campaign with SH3 Dynamic Campaign you must run Silent Hunter III (or SH3 Commander) first to create the career, then exit and then go to step 2. Or, you can choose "New Career" option in SH3 Dynamic Campaign screen and follow the on-screen instructions.

3. In Silent Hunter 3 When you sink a ship (right after you sink a ship), mark where the sunken ship location with the pencil on the navigation map. This should create an "X" on the map with a mark name (example: "Mark 3").

a) if you want to see dynamic campaign changes immediately after you sink a ship go to step 3.

b) If you want to wait until your ready to exit your patrol you may want to write down the mark name (example "Mark 1" or "Mark 3") to remember what marks are sunk first, and/or what marks are sunken ships (if you use the pencil for other purposes). If you write down your marks for the next step, you don't have to save right away. You may save when you exit your patrol.

4. Save your patrol. You don't have to exit your patrol, you can alt-tab out of Silent Hunter III if you like.

5. Go to the "SH3 Dynamic Campaign" folder within your "SilentHunterIII" directory, then open the file named "Marks.txt". This file is where you must place the name of the in-game marks where sinkings occur with the campaign name and the patrol number. An example of Marks.txt is there in that folder as well. NOTICE: that there is no empty lines (except perhaps at the end of the file).
Example:

If someone sinks a ship in a campaign named John Doe in patrol 3 and marks it with Mark 3, this is how they should edit Marks.txt:

If you wrote down your marks to edit Marks.txt later, you may do so. But remember that the dynamic campaign wont take effect until you place your marks in Marks.txt and then load your saved patrol.

7. Have fun and never stop modding!

THINGS TO KEEP IN MIND:

-
SH3 Dynamic Campaign program must be launched every time you launch
Silent Hunter III in order for the dynamic campaign to take effect.
However, you may play Silent Hunter III without launching SH3 Dynamic
Campaign and mark sunken ships and save in order for them to be removed
later, but the dynamic campaign changes will not be made until sH3
Dynamic Campaign is launched.

- You can only see the dynamic campaign changes if you reload your patrol after you've marked the sunken ship location.

- Do not close the SH3 Dynamic Campaign windows, they will close themselves after Silent Hunter III closes.

- Each campaign will have its own unique ships removed from the campaign layers.

= Randomly created ships will not be removed from the game as they are random and not unique/specific ships.

- SH3 Dynamic Campaign should work with vanilla and ALL Silent Hunter III mods.

- There is a backup to the
original SH3 Dynamic Campaign files that you downloaded, in folder
"DC-BACKUP" within your Silent Hunter III directory.

- If you
want to create a new career with SH3 Dynamic Campaign, but without SH3
Commander, just choose "New Career". The career name you enter must be
the exact same as the career name you create in Silent Hunter III.

-
If you want to create a new career and play SH3 Commander you must open
SH3 Commander and create a career, then close it, then enter the name
of the career in the SH3 Dynamic Campaign window.

- SH3 Dynamic Campaign is not programmed to work with single missions because that wouldn't make fuckin' sense.

-
If you are unsure where a ship sank, then estimate. A ship sinks when
it is placed within your in-game patrol log and/or you are altered about
it by your crew.

- SH3 Dynamic Campaign is very precise and knows what ship you sank down to the hectometre (100 metres).

- Do not place emtpy lines within Marks.txt, except at the end of the file if necessary.

-
You may skip the patrol numbers that you didn't sink any ships in, or
had forgotten to mark sunken ships in (or while using SH3 Dynamic
Campaign mid-campaign).

- The marks should be in the order of which they were sunk.

- If you are unsure what marks were sunken first, do the best you can.

Thanks for voting and helping SH3 Dynamic Campaign on it's quest to become the 2021 Mod of the Year. You are now in with a chance to score some free games from our #modlove collection. Help this mod secure more votes by embedding the widget (or link) we have included below on your favorite sites.

To promote SH3 Dynamic Campaign and grow its popularity (top mods), use the embed code provided on your homepage, blog, forums and elsewhere you desire. Or try our widget.

The WW4 modpack is a complete Operation Flashpoint modification providing the user highly optimised and very numerous troops/factions and their weaponry...

A WW1 themed multiplayer mod which will take you to the Turkish front, where Allied and Axis powers clash to hold control of the Dardanelles.

Island War is first and foremost an Artificial Intelligence system designed to create incredibly reactive and intelligent army units that are capable...

Blood Trench is a work in processes mod for Arma 3 that concentrates on the World War 1 era.