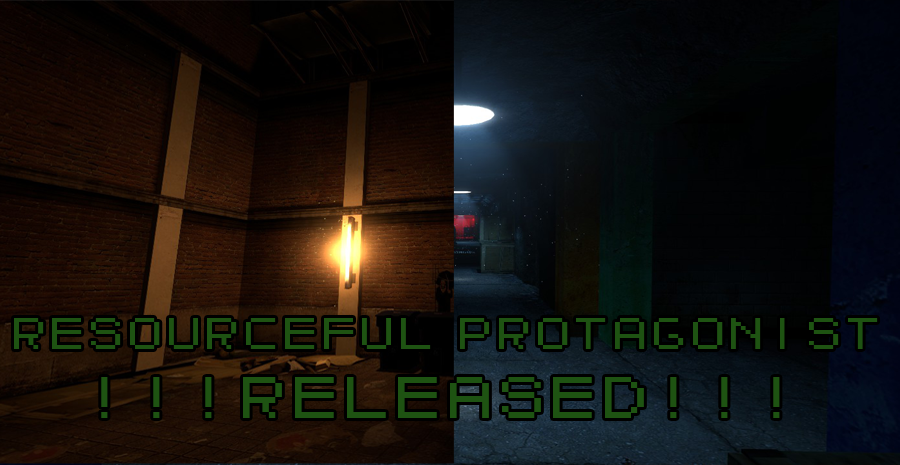 ================
I. Introduction:
================
Resourceful Protagonist is a mod all about being smart and thinking before acting, you play as a regular citizen in a non-named city under combine control. However things are about to take a turn for the worse and you have to get out of dodge.

================
II. Information:
================
You play as a man that woke up just like any other day but this time it is during a uprising that is going downhill for the rebels as well as the combine.You travel from your humble abode in the sewers to a city suffering from the aftermath that is the failed uprising as well as a desolate forest.

Today (technically yesterday) was the first mayor change in plans for the mod "Resourceful Protagonist". I had decided that the third part of the mod needed to be split up in two parts to make the transition effect get improved as well as making sure that the idea behind the exit of the un-named city would be as cool as possible without having to worry about optimization issues and such with a massive landscape.

Download the base mod first and then patch with this! If you have an old patch you don´t need to worry this patch will work with your 1.1 version as...

This fixes a wall that will get in your way. Needed if you want to use 1.2

The files required to play the mod! Installation Instructions: X://Program Files//Steam//Steamapps//Sourcemods(If not there make the folder yourself)//Put...

With "f" the torche do not fonction. It the same with other Mods but not all. Thanks for solution.

Thank you so much for playing the latest version! If it would not have been for you I would never have fixed that wall glitch! Thanks a ton :)

This mod is great, it was probably too easy to figure things out, but the atmosphere is very well made. I like the custom sounds and other extra details.

When the pistol is out of ammo it keeps firing without sound or any damage.

I climbed a combine APC in the city and could see trough the map while standing on it.

The last cabin in the end got a missing texture on one side(Totally black).

The last map before entering the forest should be open to go back, I was exploring and missed a big part of the map.

The Combines sure know where to guard in case a citizen pops out of nowhere. xD

The text that comes up sort of glitch out.

The level design was fantastic. However, you should try to add some puzzles here and there to make the mod longer. I sped through without doing much, but because I sped through it means the linear path is well coordinated. I might play it over again and see what secrets lie in each map.

Thanks man :) You wanting to replay the mod is a very nice thing to hear! Puzzles that I would implement are likely to be simplistic and won´t be satisfying to solve however when I get more time I might be able to make something interesting to solve!

By convention HL2 uses heat shimmers to indicate flammable gas, the ones coming out of the vents on the streets don't follow this convention.

I've tried the patch release and I like that you've extended the 3rd map. I still find the mod to be a bit too easy though. Maybe you could decrease the number of ammo and supply caches you find so the player has to think about conservation of health and ammo? That would put more emphasis on exploration. And that in turn would put more emphasis on whether a player would want to risk encountering a hazard.

Did you play on hard? I found that is a nice equalizer for now, however I am in the works of decreasing the amount of ammunition and health :)