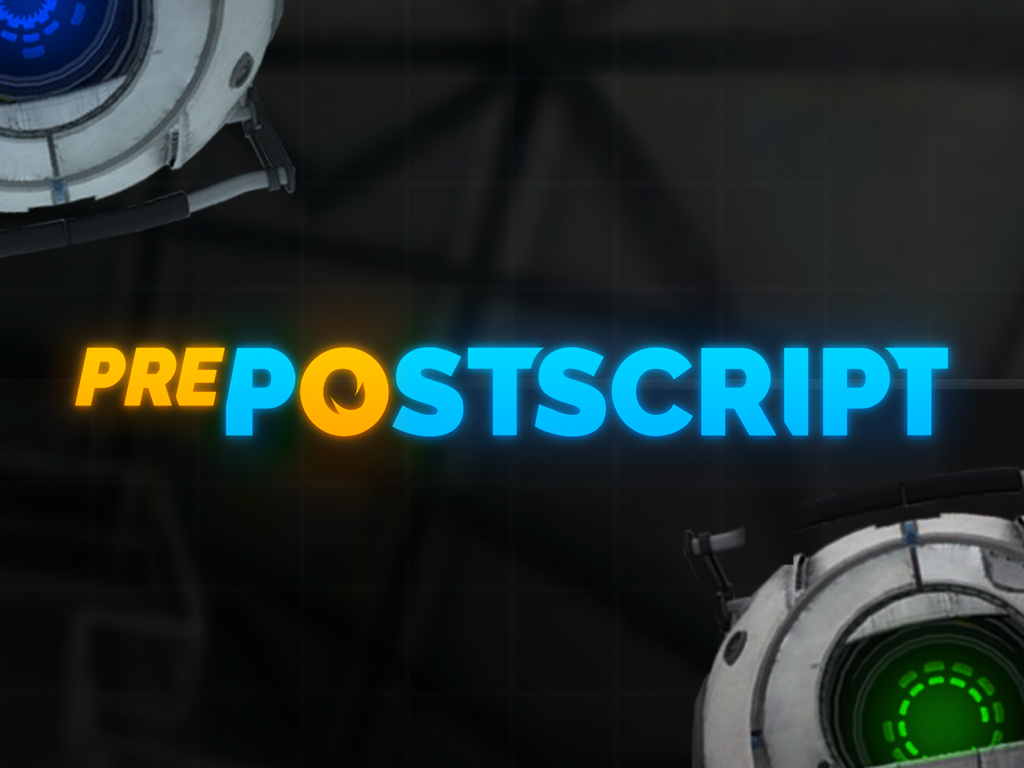 It's a mini story-driven mod based on the ideas I had in Conversion. It's the same setting: pre-Portal 2, post-Portal 1 timeframe. It also has your good old pal Green, the core.

Why is it not called Conversion?

The deal with prePostscript is that I'm the only one from the original development team who's making this mod. I just wanted it to have a separate name to avoid any confusion with what was promised and all that.

No, it's a full blown story mod with dialogs, new mechanics, and plot. It's just much shorter than it was originally intended for Conversion, instead of 6-chapter 6-hour long mod, you'll be getting around 2-3 hours of content. It's gonna have 3-4 Chapters and some additions that will make the game a tad more replayable.

How different is it to Conversion?

Well, I'm making everything from scratch, that means all the maps, models, features. The original plot is somewhat the same, I've just changed some characters and added some plotlines to better tie Portal and Portal 2. The playable character is gonna be different as well, more on that later.

Is it gonna get canceled too?

Most likely. I can't promise anything, but I'll be focusing more on prePostscript as it's my way of learning new skills needed for future game development career.

Yes. It's gonna be under the same AppID as Conversion.

It's a new mod created by the guy who designed Conversion (excluding models, maps and soundtrack) meant to provide at least something to those 50,000 people who put Conversion in their Wish List on Steam.

Please, Owlahk, can we have a status update?

Don't screw this up. You need some supporters.

is there a discord server i can join to stay updated on this?

Concerning Conversion, were you the one who posted updates on the mod's Steam page ?

Will the High Energy Pellet Rings and HDSCSBRGF from Afterword/Conversion be in this?

I was wondering if you would like someone to create particles for the mod.
PM me on steam: Kittymatthew

46 members
You may also like
View All Top Mods