Lambda Wars (formerly Half-Life 2: Wars) brings the struggle between the human resistance and their Combine overlords to a multiplayer real-time strategy setting. The Lambda Wars beta only requires Alien Swarm installed to play. It features 3 multiplayer game modes: Sandbox, Annihilation and Overrun, showcasing the Rebels and Combine playable factions and a full-fledged RTS interface and HUD. There is also a singleplayer tutorial and a handful of singleplayer missions.

Myself for doing all mapping, Pandango for Survival map Inspiration.

Hello, in the last few days i have been working on making a survival map as the rebels. You have to survive as long as you can while wave after wave of zombies attack you. i have made three map attempts and though all could have been succesfull but ive put most of my effort into this one. This map is hlw_ZomDefence_2, it features a good-sized fortified building to defend. a decent-sized Roadblock/Combine Outpost, and a small building which some combine soldiers have been trapped in. -Currently the Combine will not bother to attack your men, as they are to focused on eradicating the zombies, yet only a small amount of combine will bother to use their ammuntion on the zombies because they do not have the means to attack the combine. (2 Sniper combine and trapped combine soldiers will of course fight. You have about 12 Rebels (including 2 medics) with different weapons. 2 Setup Machine guns covering the North and South of your building are at your disposal. Fight for as long as you can. 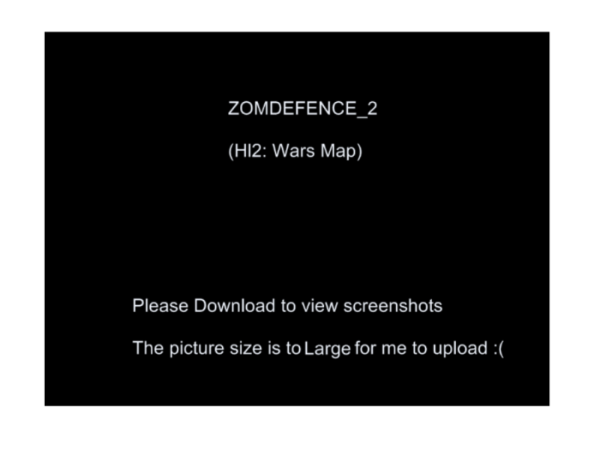 Looks good, Ill download it when im not so lazy :3

So, this means that you are still alive?

We are still alive, but this is a user-uploaded custom map, not from us.

lol resitance, i do not know any other language othern then English, you must not be reading the right read me.
Are you using something like WinRar to open rar files?
You should then youl find it works.

And yes im going to be mapping alot more now

the readme is the only thing it downloads

how do you use rar.?

download winrar and use it to open the .rar file

soory, its likely that ive made the readme in a program your computer dosent have, i dunno i cant remember il try to help you later but for now im enjoying my holiday :)

Yeah i wrote that in the readme as well....
Thats just general Hl2wars does that i think. They just generally always see as a normal zombie as a higher priority then headcrabs, i dont know how to change this. The only way so that they do attack headcrabs is when you manually click on the headcrabs themselves which can be very hard as headcrabs build up or if you kill all the zombies (which is not likely since they keep spawning) then they will see the closest headcrab is the best target i guess.

I just installed this, I'll play it later, and it looks pretty cool. Have you considered working with the Half Life: Seven Hour War guys?