This mod focusses on implementing the old 3D era maps and combining them together on the San Andreas engine. This includes maps from GTA: III, GTA: Vice City, Manhunt, Manhunt 2, Bully, and ofcourse GTA: San Andreas itself. Not only are we adding the maps, we are also trying to implement the features these games have aswell. This includes hardware shops, vehicles, peds, weapons, and other content.

Everything is done in the same style as how San Andreas is.

GTA: Underground implements extra gangs into GTA: San Andreas which spawn in their respective cities. They also use their own weapons from the respective games aswell, and you can even take over their turfs.

TRAFFIC IN EVERY CITY

Every city is fully loaded out with safehouses with custom interiors from their respective games which can be bought, and with shops where the player can purchase vehicle tuning parts, junkfood, clothes, and much more. These shops are also marked on the map!

As stated above, we've implemented the interiors from the respective games. To make them feel more SA-styled, we've adapted all of the interiors to work with SA's enex system, which means custom entering/exiting animations.

All of the added maps also come with their own set of props, and even streetlights, signs, benches, and trash cans (and ofcourse more), and so we've made all of these custom objects breakable, and gave them all 2dfx, as seen in their respective games.

While spending time in Vice City or San Andreas, you are able to make money by purchasing assets from both games. Once you buy them, you can collect money from them by walking into a pickup.

GTA: Underground also adds (not replaces) all of the vehicles from their respective games, and they can be modified at tuning garages, and the added vehicles will even have unique abilities such as sirens, moving engine parts, and jet gears. Plus, all of them are redone to fit in SA. Added weapons can be bought from Ammu-Nation stores in added cities, and added peds can be seen roaming their home city.

Too lazy to fly to a different city? No problem! GTA: Underground updates the airplane ticket system so it will allow you to purchase plane tickets to and from these added locations.

SOLID ROOFTOPS AND BUILDINGS IN VICE CITY AND LIBERTY CITY

Since in GTA: III and GTA: Vice City a lot of the buildings were simply not solid at the rooftops, we've updated all of the rooftops so that they are and will be solid. In some places we even added extra detail and props to give these rooftops some new life!

We've also added a bunch of extra cheat codes from their respective games to let the player have some fun!

GTA: Underground is shipped with a vehicle spawner which allows the player to spawn every single vehicle from the game, including the added vehicles. 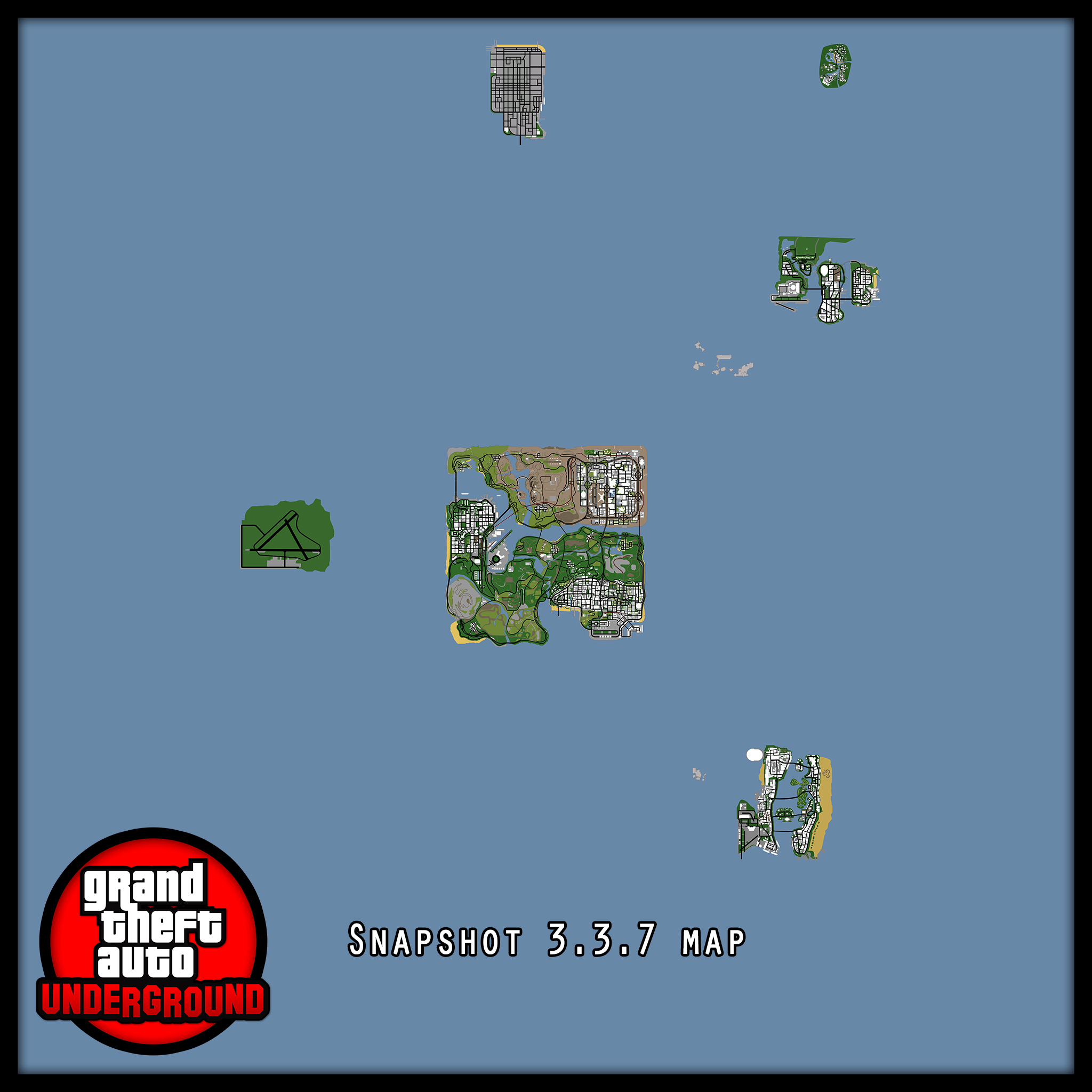 Will you add GTA: IV/GTA:V maps to UG?
Obviously not. The project only adds the 3D era maps.

Will my GTA: San Andreas savegames work?
No, they won't. GTA: Underground uses a seperate directory in the Documents folder, and any savegames from SA will simply not work.

My game is crashing right after I clicked "Start game" on the very beginning of the loading process, what's wrong?
Take a look at your DEP settings, try to set it to "Essential Windows programs only". You shouldn't set it to anything else for security reasons.

Is Snapshot 3 the final version?
No, it is the final snapshot before the first beta release, beta 1.0.

Is there an official website?
Yes, there is! See the links section.

Today we released a new update that will mark the end of the Snapshot 4 branch.

This past month we worked hard on improving the quality of UG-MP by working closely with server developers and testers on fixing crashes and common bugs, however our main feature of this update is our brand new installer - the solution to most of the installation problems and errors that plagued newcomers to UG.

You will now have the ability to easily install GTA: Underground using our brand new standalone installer, It comes with 11 supported languages including Spanish, Franch, Russian, Dutch, German and more. The installer is able to install not only your game, but also any dependencies you will need in order to run GTA: Underground. In addition, the installer offers a built-in downgrader that can automatically downgrade your game version if you are using the Steam or Rockstar Games launcher version of GTA: San Andreas - as these versions are known to be incompatible with GTA: Underground.
This version is FULLY STANDALONE and you do not need any previous versions to play it, you can simply use the installer on a clean San Andreas installation and that's it!

As mentioned before, we worked closely with server developers and testers to make sure we cover all of the known crashes and bugs that are hurting the experience of the players - known crashes such as the radar legend crash and the opcode warnings are now fixed. We also fixed numerous UG-MP synchronization problems, such as vehicle colours not persisting after installing them in a mod shop and not being able to roll up windows again after rolling them down earlier (all vehicles will appear to have no windows) In addition to all of these: Numerous map improvements have been made such as fixed collisions in Vice City and restored water in missing spots, updated radar map and a bunch more.

QoL (Quality of Life) updates to the UG-MP launcher

The UG-MP launcher has also received a few updates: You can now add a server to the favorites tab by its hostname and the launcher now has a new server preferences feature which allows you to save your server password, RCON password, and your nickname. We will continue making these little quality of life updates to make our launcher more comfortable and usable by everyone. Some ideas on the table for future updates right now include making the launcher multi-language - meaning you will have the ability to switch languages if you feel like doing so, as well as fixing the problems surrounding using domain names to connect to servers.

Will there be an auto updater?

Something that a lot of people have requested lately is a proper auto updater. Unfortunately, Snapshot 4.1.7 does not come with one, however it has been on the table for a future update for some time now. We don't have any concrete plans to introduce it in, say, Snapshot 4.2, nor any other future update. This doesn't mean we will never make one, though. The primary issue(s) holding us back are bandwidth and server availability. UG's updates are often larger than one gigabyte, so the download speed must be good, even if a lot of people wish to update their game. Furthermore, we would absolutely have to make sure the servers are available 24/7 - we don't want players to be unable to download one update just because the servers are down for whatever reason. The Snapshot 4 release is still in fresh memory after all...

As said, Snapshot 4.1.7 is going to be the last update on the Snapshot 4 branch. This means that we are going to focus on larger updates that hopefully will come later this year. The first of these will be Snapshot 4.2 - which is a larger update which may take several months to complete. We have always said that we wanted to return to more frequent updates by the time we released Snapshot 4 - and Snapshot 4.2 would just be the first big one.

Even before UG:MP's initial release we wanted to have a DL feature similar to the one in SA:MP and since it's one of the most highly requested features, we will focus on bringing our own version of DL to UG:MP for Snapshot 4.2. In other words, giving server developers the ability to add their own custom models and maps into the game, and have the client download & play on them. As for that, we have huge plans. There's still lots of unannounced stuff in development and brand new ideas are popping up every day - currently we are still experimenting with these ideas so stay tuned! we have a lot in store to show you soon. 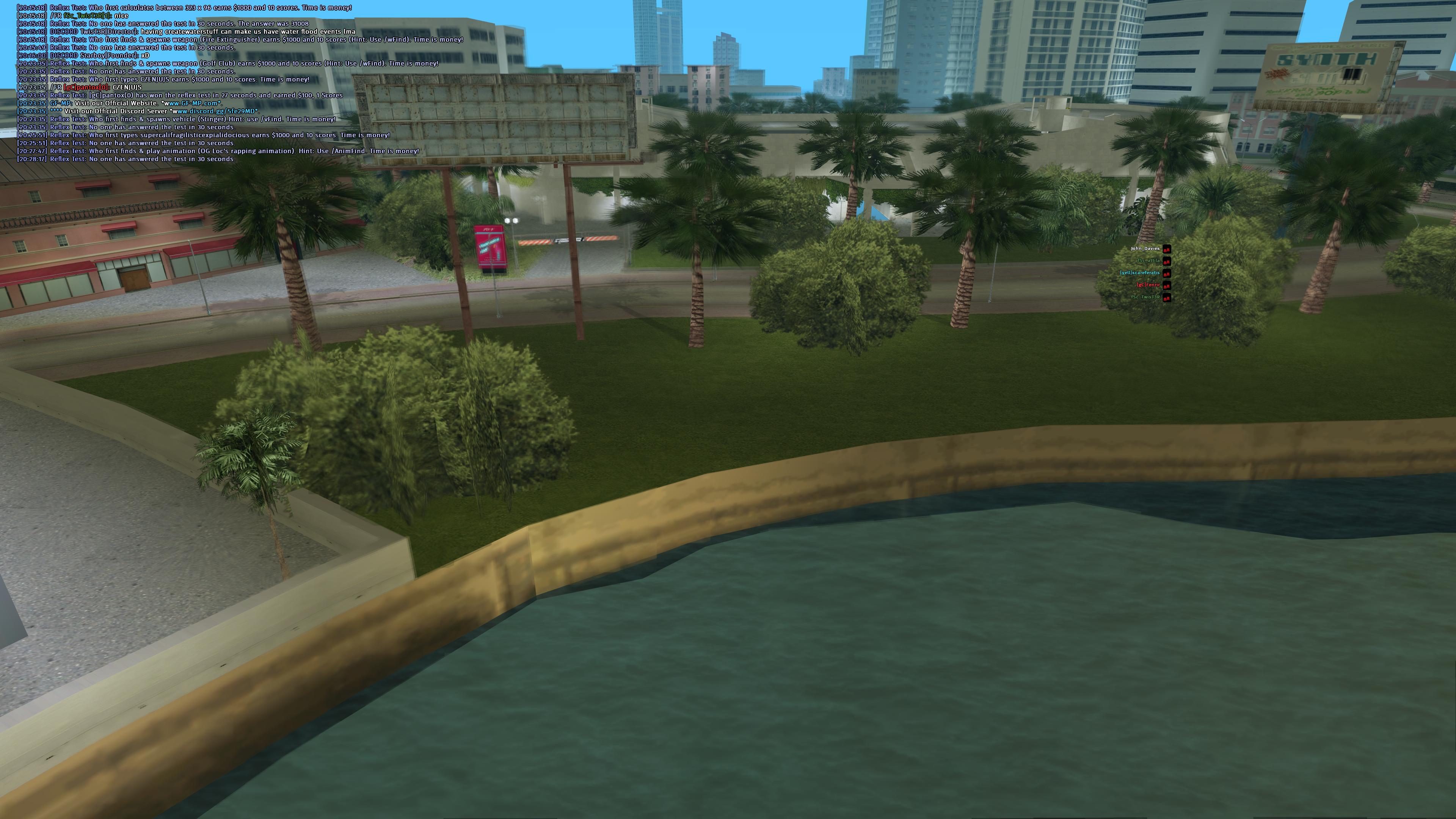 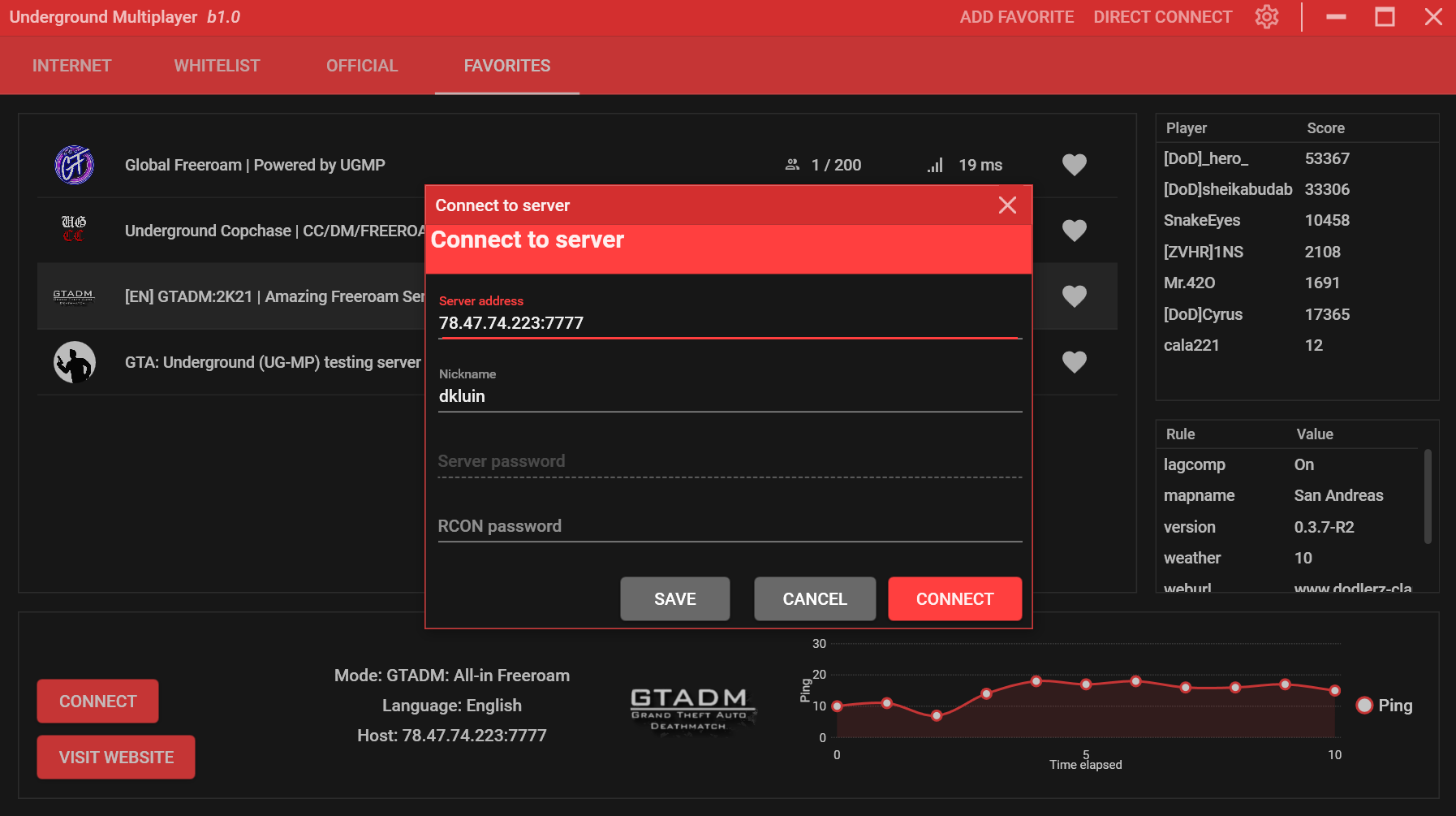 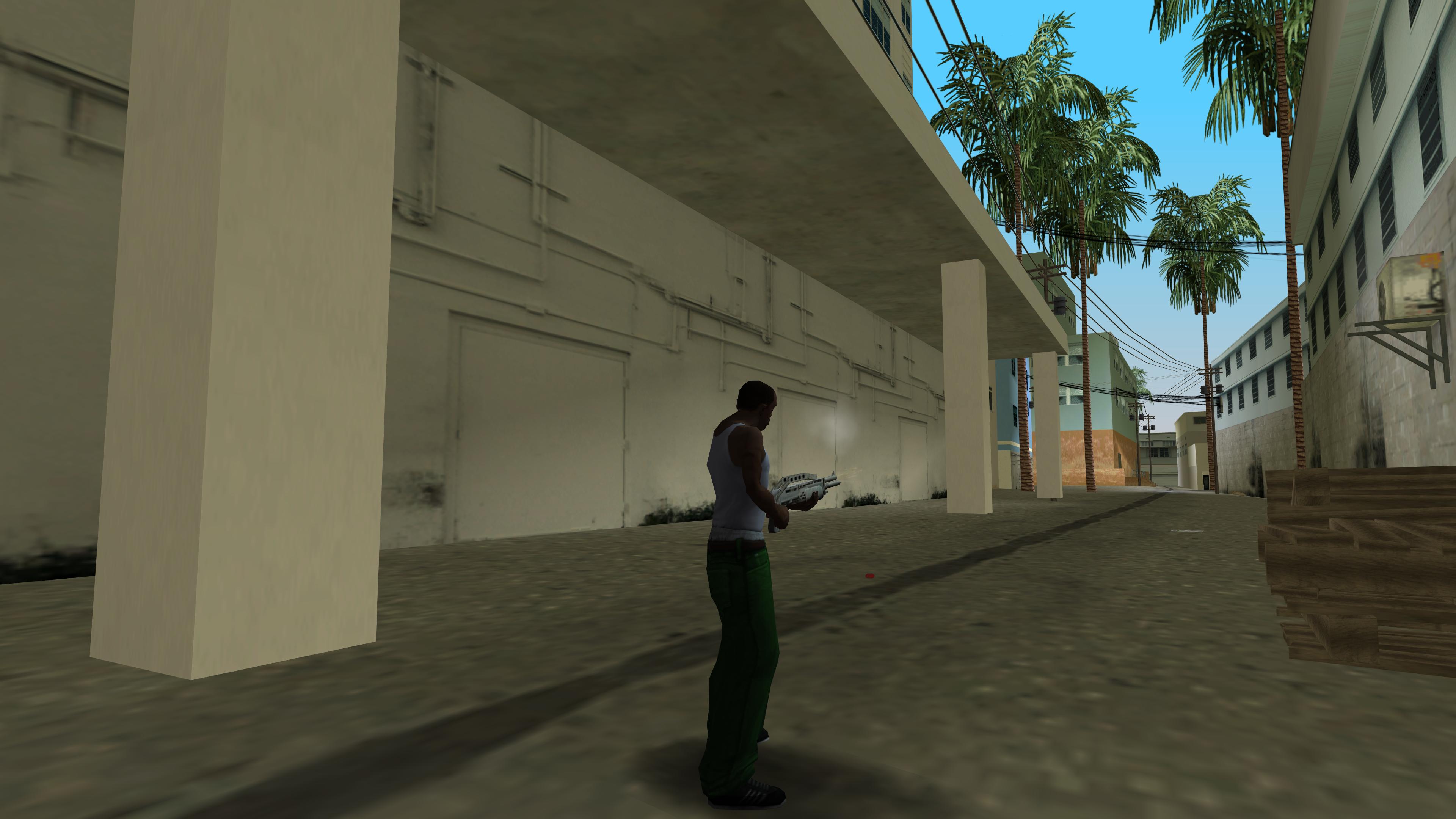 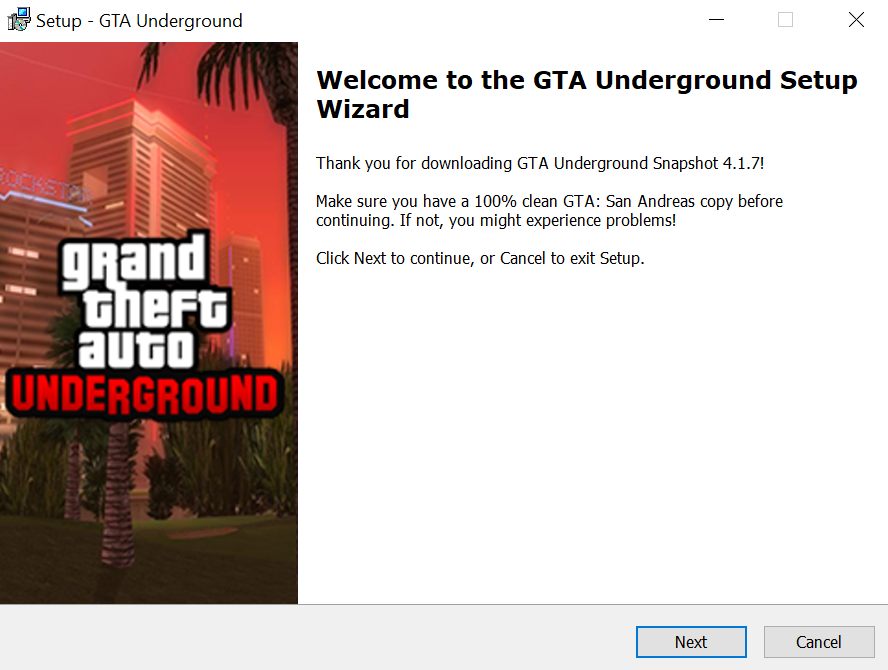 After many sleepless nights, countless debugging sessions we are very happy to announce that the final release date for the long awaited GTA: Underground...

Total overhaul of the weapon stats

GTA: Underground's latest update provides a complete overhaul of ALL of the weapons (400+) available in the mod and adds 25 addional melee and firearms...

The last update on the Snapshot 4 branch. It fixes numerous crashes and other problems on UG-MP. It is fully standalone and comes with a built-in installer...

An update which fixes some server-side issues, including problems with attaching 3D text labels to vehicles and peds.

Another update which improves gameplay stability on UG-MP and on singleplayer.

This update primarily fixes some stability issues in Snapshot 4.

Good news for everyone who is waiting on a version of GTA: Underground and/or UG-MP which has better performance. Snapshot 4.1.3 is now available which...

Snapshot 4.1.2 is now available! This update comes with some pretty significant changes to the UG-MP launcher to ensure people can still play UG-MP with...

I was play some old versions of the mod, and it have some unique texture for map, like. Not just like original islands, but all of it has been conected by mountains, roads etc.. But later, i don't find it anywhere, it still a chance to see it ?

Can you make a application icon of GTA underground single player?

i have sa in social club and it keeps loading that one altho i used a seperate folder for it anny idea? This wasnt on the previous build eaven remember a difrent icon..

Man, after installing this mod i encounter a massive performance problem. Like, i don't have any problems with clean GTA San Andreas, but with this mod FPS drops to 5 in the field near the highway where the harvesters are! Sure i have old PC but it should have been enough for the old game like this! I mean, is the Intel Pentium D CPU 3.00 GHz with two cores, 2 GB RAM and ATI Radeon HD 2600 PRO with 256 MB of VRAM is not enough? Seriously guys, you need to fix the performance problems with your mod! Delete everything that impacts performance and leave only original content.

This mod does what GTA: United failed to to: Uniting all 3 D Era Maps into gta San Andreas while maintaining (even improving in this case) the original San andreas map.The added cities also feel complete due to added pedestrians/cars/weapons from their prespective games. One can see that the developers put a lot of effort into this and are constantly updating and improving this mod. In my opinion the best total conversion ever made. It is also nearly bug free. This is what any true gta fan ever…