Full Tutorial with Video of the Classic Frontlines' 2 in 1 gametype. 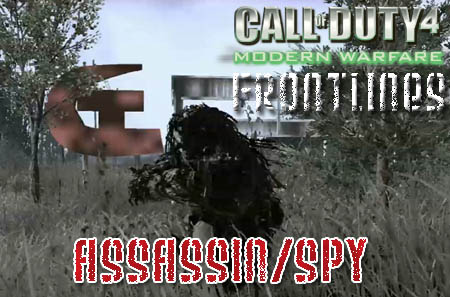 This gametype it's an Individual and Team Based game at the same time...

Well, it's a little weird at the beginning, but it's a lot cool after you understand the game.... I created this one many years ago in our parties of my Quake clan which we play RA2 for many many years together, then it's always LOT's of fun.

ONE player is selected to be the Assassin, ONE to be the VIP, and the others will be the Soldiers of this VIP.

The Assassin MAIN objective is to kill the VIP, while the VIP is to reach the Zulu point to get some extra points and to call a chopper to protect him, and all the soldiers is to Kill the Assassin.

here the main ones:

There's lots of more combinations, speacially with TK and suicides, if the VIP is killed, he lost 50 points for exemple... and goes on... The Assassin have access to ALL weapons and perks and will always receive the perk UAV Jammer. While the soldiers have few limitations in the weapons like no RPG, Noobtube, 3 frags & Hardpoints.

The Anti-Camping only request to the Soldiers/VIP to move, aside if the VIP reach the Zulu point he can call a Chopper and can camp until the end of the round. We setup to 16 rounds on our server, so when reach the roundlimit who have the best score Wins the game.

It's a variation of Assassin, now will be the Spy that tries to kill the VIP but this time the Spy have a full Radar of everyplayer (even the ones with UAV Jammer), and get the Silent Mode kit, with a smg with silencer, no hardpoints to both sides.

So now he will must kill MORE with his brain than with his weapons, which become a completely different gametype, which remind the Predator on the Vietnam jungles where he start to kill each man without anyone know where he is... it's really fun to play among friends...

How it goes along with the bots? Any release date yet?
I´m so excited for your work.

It's kinda finished! I'm making a new promo video to release the mod on 10th Years old birthday in march. Until there I'm tweaking as much as possible to every single detail to make it perfect. I just made 2 new gametypes and still needs more tests. Stay tunned! :D