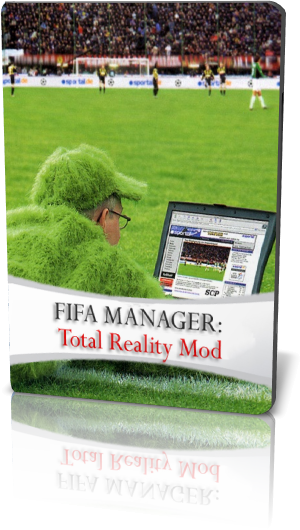 So far, absolutely new game on FifaManager09 engine will shock you with its
gigantic multimedia and database content, now it's not only game, but it's a
football encyclopedia... "Total Reality Mod" - global fan mod on game engine FIFA
MANAGER 09 consists:

Note:
if you have not enough free space, install crashes with "EXE error"
if you are installed German version of the game, rename "FIFA Manager 09" folder on C:\ with your documents to "FUSSBALL MANAGER 09" after installing this mod

Direct Torrent-File: (download and then open it with uTorrent): Gamefront.com

Hi! due large mod size and low speed at Depositfiles.com, we are uploaded mod and posted link to direct Torrent-File with mod !!!
Download Torrent-File, open it with mTorrent (or other torrent-client) and download mod !! enjoy =))

Here there is !!! Congratilations!!! Final version is released now!!!

Great news! We are starting final testing and Installator build on this week, mod wll be released on next week - 7-10 august!!! We added more than 2000...

Final news from developers: sorry for delay, but some technical problems there are... :( But work still in progress: - converted and added 3D-stadiums...

Hello! it's time for our news... After Europeans clubs, we are was done all South American clubs stads&cities photos, also collected and finished...

It's great! thanks for the mod!!!
Will there be a link to a torrent?

again deceived with a release date =(

Yes! we have some technical problems =(