Your vigil is over fans of Elder Kings, today we release our biggest patch to date with literally hundreds of changes, new content additions and innumerable bug fixes!

The Elder Kings team has put in literally hundreds of man hours into getting this version stable and ready for release. As always with "in-development" modifications, there will be bugs but after hours of testing, fixing and tinkering we feel the next version of Elder Kings is ripe for playing, so spend your weekend with us building your dream empire in the world of the Elder Scrolls. 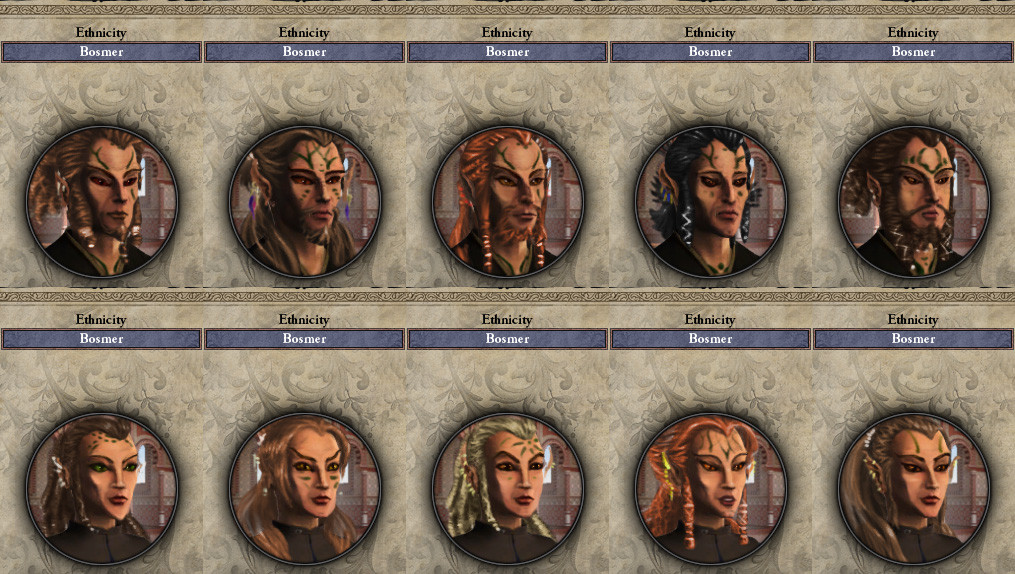 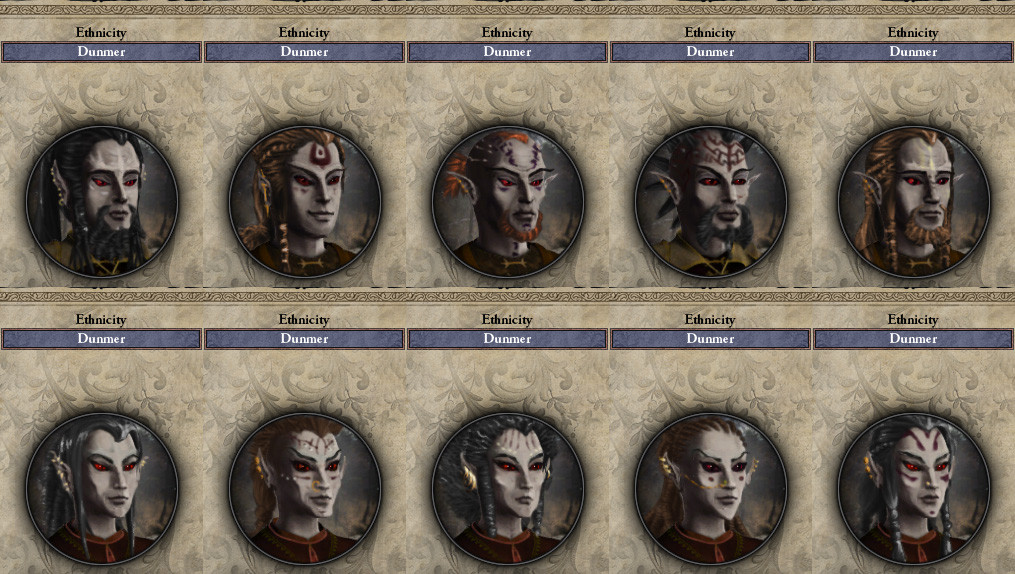 One of the changes many of us are really excited about in 0.1.5 is the inclusion of brand new portraits for the all of the Mer (including the outcasts, the Orsimer). 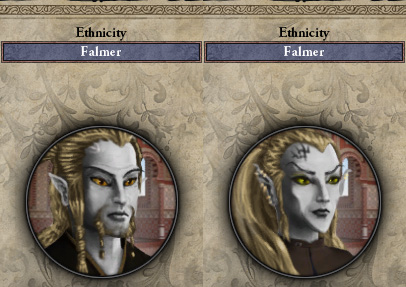 We've also listened to feedback from fans concerning the Snow Elves, or Falmer. This race was previously not included, but after listening to feedback we've included a Ruler Designer only Falmer race, with portrait set. 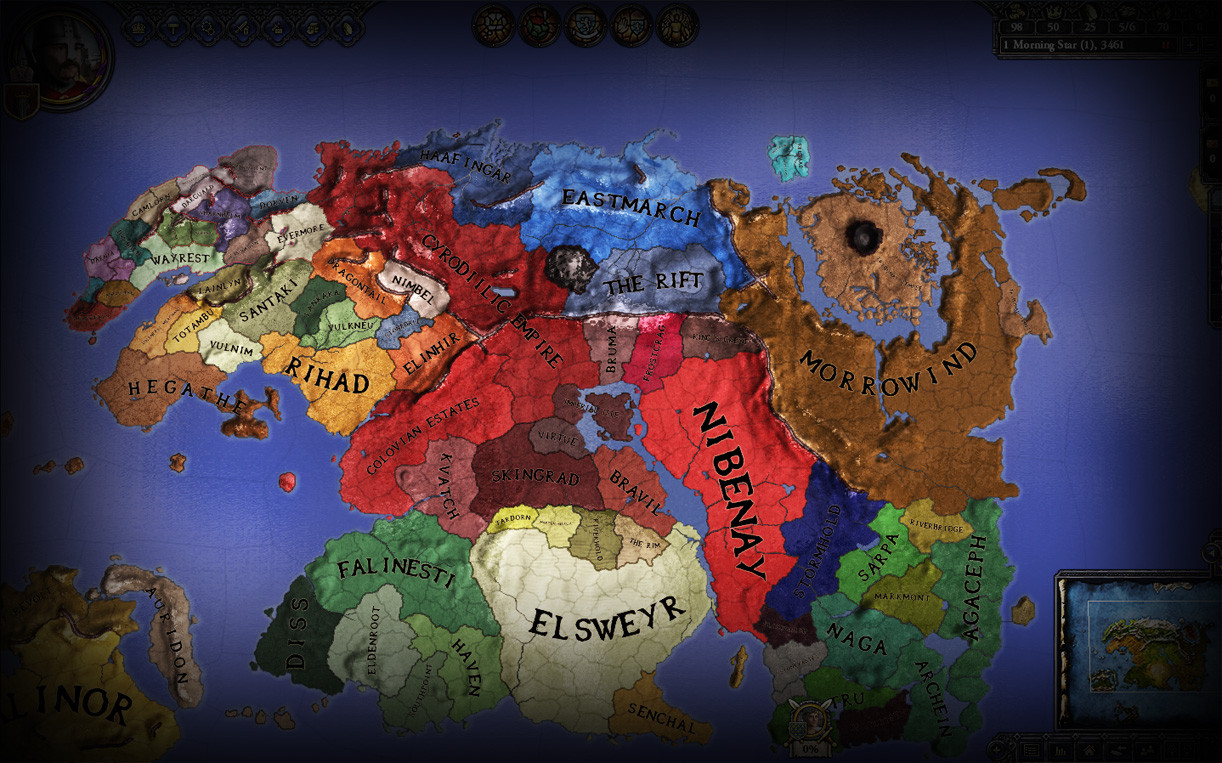 0.1.5 also brings our first new bookmark since the initial release. You can now experience one of the pivotal moments in Tamrielic history leading up to the ESO Storyline with the Reachmen Invasion of High Rock. 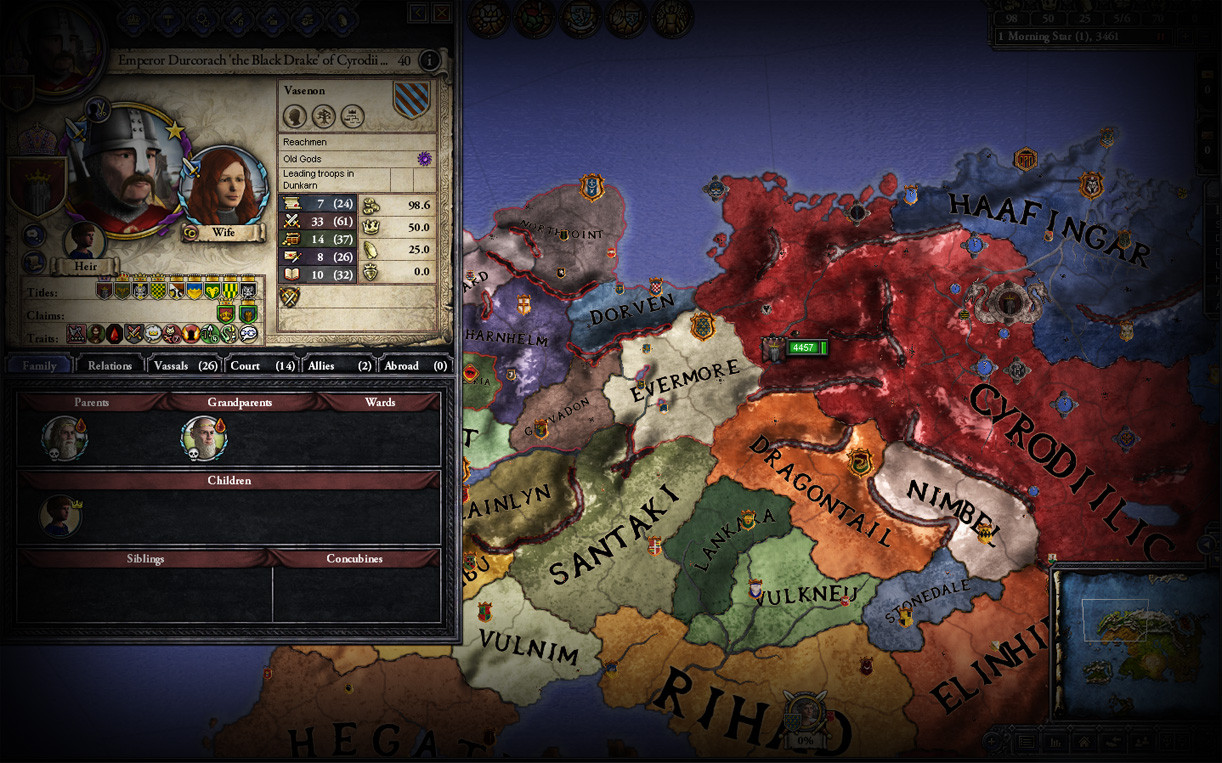 Set 541 years into the second era, the bookmark features Durcorach as a powerful Reachman Warlord who has claimed the Empire of Cyrodiil as his own, but his power is symbolic at best and no Lords recognise him as the true Emperor. Despite this Durcorach has used his powerful base of operations in the Reach to launch an Invasion of High Rock. The north eastern Breton realms have already fallen, and Durcorach stands ready to crush Evermore beneath his heal. 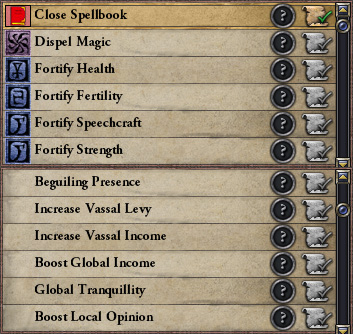 This new patch also includes many changes to existing systems. The Spell System rewrite, something planned and expected for a very long time has finally been compiled into a playable state. The spellbook itself contains over 100 spells, split across the various spellcasting Educations, and another fundimental change in the system is automatic regeneration of magicka; no more purchasing potions every other month!

Councillors are another area that has changed significantly. During testing of 0.1.5, we observed that the AI in the base game is unable to handle additional Councillor slots or even job actions; it simply hasn't been programmed to allow them. This meant that players were gaining a huge advantage over the AI in terms of Councillor job actions and deployment. Due to the constrains of the AI we removed our 6th Councillor position, and merged it's functionality into the Court Priest. The Court Priest is now known as the "Magister". The Magister actually has a completely new and unique functionality never before seen in Crusader Kings 2; Vocationally based Job Actions. 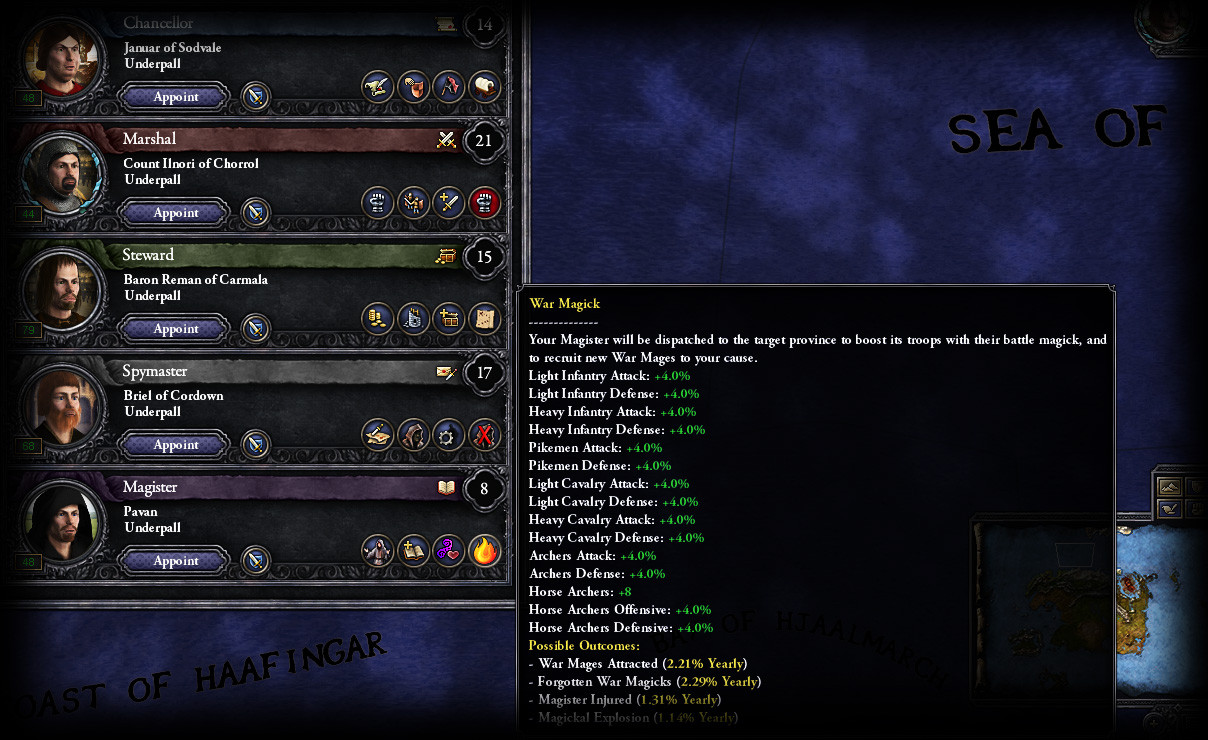 As you can see in the above shot, the Magister has the "War Magick" job action available. This job action is available as the Magister is a Battlemage. Other Job Actions include "Heal", for "Spiritual" Magisters (Priests, Monks), "Alchemy" for Nightblades, and "Consult the Grimoires" for Mages which should allow you access to some limited spell as a Non-Mage, in addition to a few modifiers. 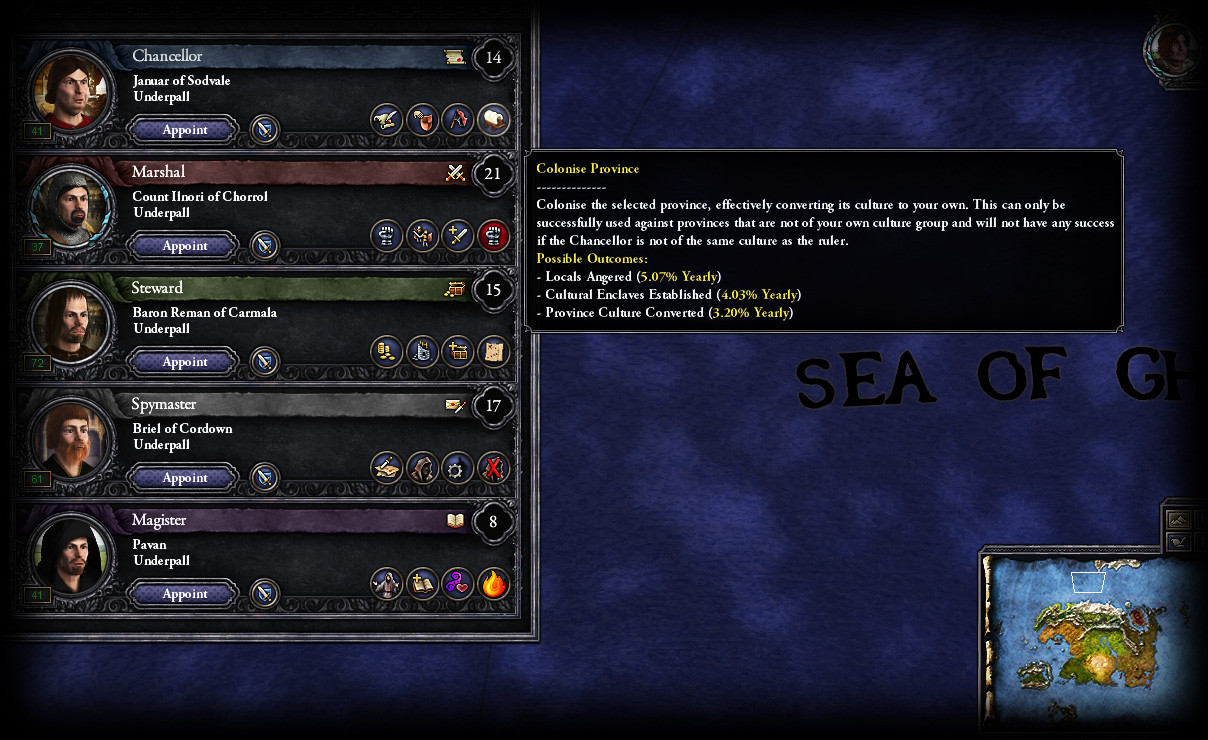 Along with the change to Court Mage/Priest/Magister, we've tweaked many other job actions and removed some that had marginal utility. The "Slander" job action from Chancellors has been removed and replaced with a "Colonise" job action; Players are no longer able to just sit and watch as their realm changes from Imperial to Khajiit, now they have to actively deploy their Chancellor to convert a province's culture. This helps slowdown Cultural expansion in the world (which as we know from the TES games, was a very slow, if not non-existent thing in canon), and forces players to decide whether to deploy their Chancellor to gain claims, improve relations, or colonise.

That's all for now; I can't list every single change in this news post as we've simply made too many. If you want to discover just what else Elder Kings has, download the mod today and give it a spin!

Those new portraits are just gorgeous. Loving this release so far.

I noticed the dragon priest don't wear mask anymore,I hope in the later releases you add new benefits to other religions, but fantastic work, by far the most complete and lore friendly mod to date. Looking forward to the future, playing in the past. -Heretic

Male monkey faces looks just black in my game. What can be the reason?

C-Can... can it be? 2.1.4 compatibility? Surely you jest! Such talk is confined to the realm of legend.

In all seriousness, this update is superb! A new bookmark has finally arrived, praise be to Korbakatosh! Many new features, and the updated spellbook is great. This has rekindled my interest in Elder Kings, and now I probably won't leave my computer except when absolutely necessary for the next few days. Keep up the good work! One of the best mods I've ever encountered for any game, and by far the best CKII mod out there.

Am I the only one experiencing fiefs and dynasty shields simply being grey with a white ? in them?

You're the only one getting dynasty shields with a white "?"; that shouldn't be possible. Realm COAs though, some have various coloured "?" flags as no others exist for them yet (we lack a dedicated flag artist/artists, AGOT swallowed them all up).

No way to put random fillers in there? Even simple geometric patterns would be better than question marks.

This looks great! too bad I was never that great at this game :/ I wonder if there are any good ARRs of this version yet?

A large portion of characters and counties show no religion in my game thus making them unplayable. Religion tab shows almost all world black. What is the problem?

I don't want to be picky, but wouldn't a bookmark including the rise of Tiber Septim (for example) have been more appropriate and fun than events that are barely mentioned in an average MMORPG?
(But the mod is even better than it was before, so I don't hold grief :D)

Our mod predates even knowledge of the existence of the MMO by a year, we were developing our Interregnum bookmark long before the MMO. As for the new bookmark, the events alluded to work well for our bookmark, since they weren't a huge leap from our current time frame it was easy to pump it out. Working chronologically means we can add new bookmarks (hopefully) quicker since we only need to add one or two generations from the last bookmark. If we jumped ahead to Tiber, we'll have to fill in some 850 years of history; so technically you can consider all the bookmarks up to Tiber being the groundwork, we are actually building his bookmark, we're just adding others in between based on the history we're making for his :)

Yes but all the alliances in eso are massively against the previous Lore.

sux, what exactly is this about?

How to make a world class BLT.

Thanks a lot, now you're gone and made me hungry. ;p

Has anyone else experienced a glitch with the human portraits? My character's headgear is shifted to the right, off their person entirely

The -only- cause to date of this issue is either not using 2.1.4 CK2, or not uninstalling existing versions of Elder Kings -completely- before installing new versions.

How do you employ spies? I cannot figure it out. Please Help!

I got a question, it says the game will terminate in an unusual way every time I try to start up CK2 with the mod, plus since the game was all updated, I can only downgrade it back to 2.0.4 or 2.1.6, so I don't know how to deal with this issue here, HELP!

(NOTE: I don't have Legacy of Rome but I did download the compatibility addition.)

I can get in but i cant start up a character... also i was wondering the same thing with 2.14

I've got the same problem. Its likely a compatibility problem but using a older version of the game or mod does not help, so there is no fix right now. We can only wait till the mod is updated for the new version.

I just noticed something. I'm a long-time user of this mod, same with a few friends. We'd always give progress reports of our kingdoms and how they worked with the character creator. I just got back from a long break and reinstalled the new version. But it's missing something. Mothists. Same with a few other religions.

What patch are you using, exactly?

I have 2+2 DDR3 GB of RAM and i cant play game for some reason, it says i dont have enough? how much ,ore do i need?

I cannot open the game with this mod, it just crashes immediately.

Is there a version of this mod compatible with ck2 2.5.2