It has been a long time coming but 0.1.4 of the Elder Kings, an Elder Scrolls Total Conversion for Crusader Kings 2 has finally been released!

(New installer uploaded, if you downloaded the previous one, please download the fixed one and reinstall to fix Argonian and CTD Issues)

After a rather long hiatus due to other commitments, including work, school and new babies for the development team we have at long last pulled through and brought Elder Kings up to a state at which it can see the light of day again. 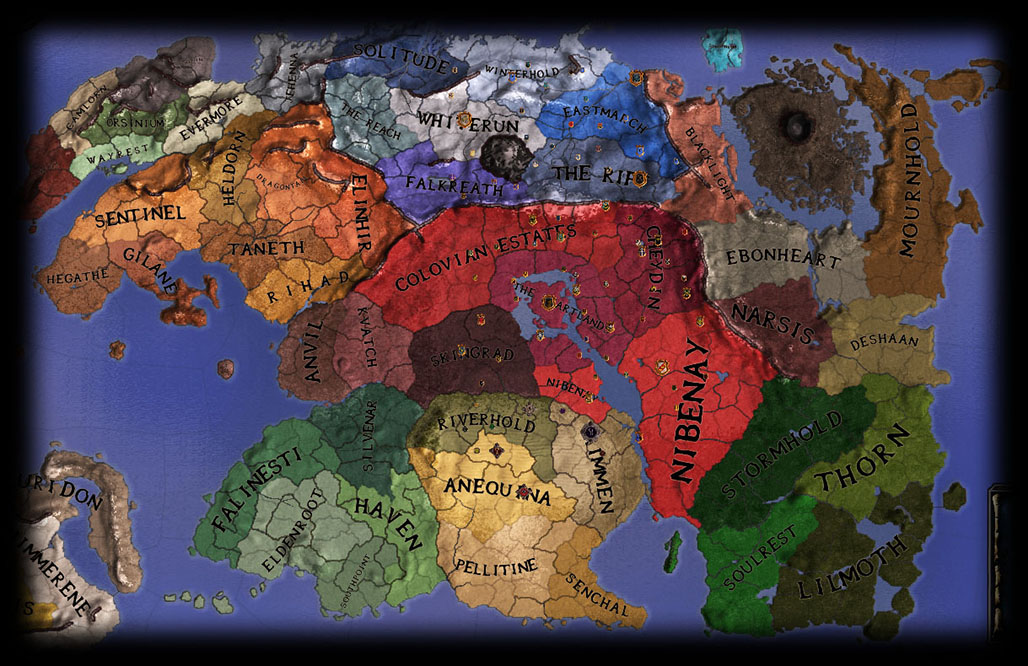 0.1.4 introduces a whole host of fixes over the previous versions including fixing the critical "No Education/Trait" bug. The main cause of this bug was the crazy high character ID numbers we were using in some files. Due to this issue, along with many smaller bugs in the history files we were basically forced to vent all existing history and rebuild it from scratch. 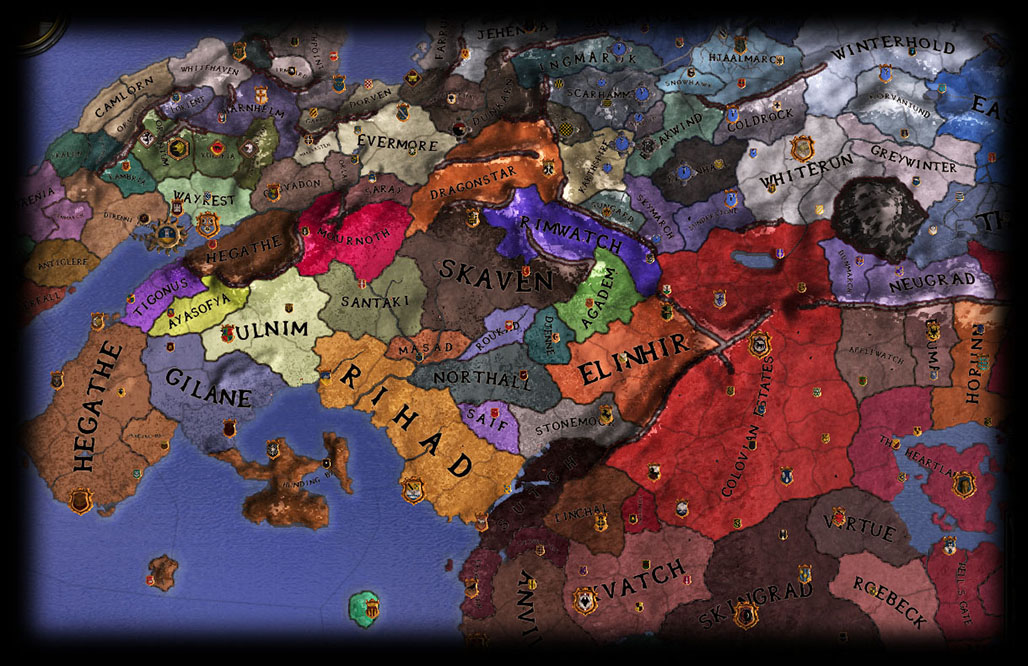 As a mod evolves, so to does its development team. New people come and go, and the new history shows the impact of new hands upon it, with areas such as Cyrodiil & High Rock, as well as the entire continent of Akavir have been completely reworked from the original history. 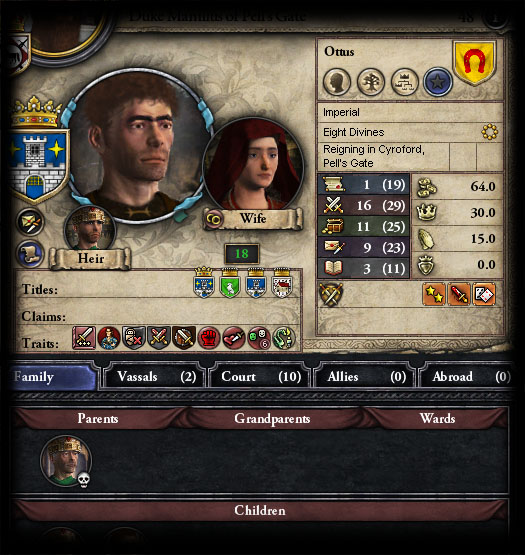 We're still lacking more bookmarks and the current one is a bit thin on historical characters, but rest assured that now that 0.1.4 is finally out the door new updates will be much more frequent, and smaller, introducing new bookmarks and fleshing out our existing one.

In addition to history we have the beginnings of a more fleshed out and indepth Vampire system courtesy of Etherion, one of our new development team members. His work, along with Enjoy's (another new comer to the team) should from this version onwards help enhance gameplay for Vampires, Draugr and eventually Lycanthropes. 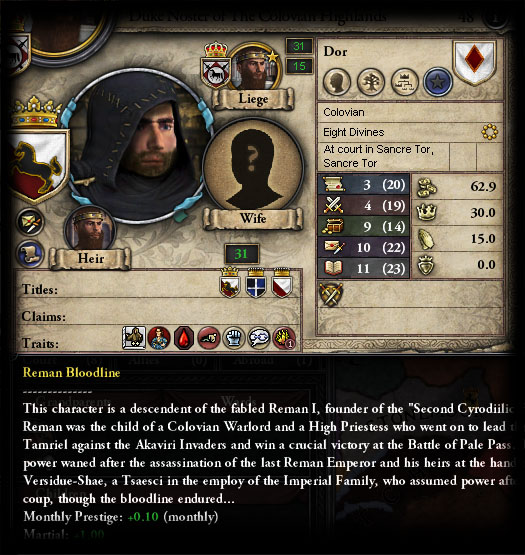 Of course 0.1.4 also includes the previously previewed features such as Bloodlines, which will add a little flavour and depth to certain characters. As one of our Developers put it, if you play your game "right", you could eventually "catch them all". 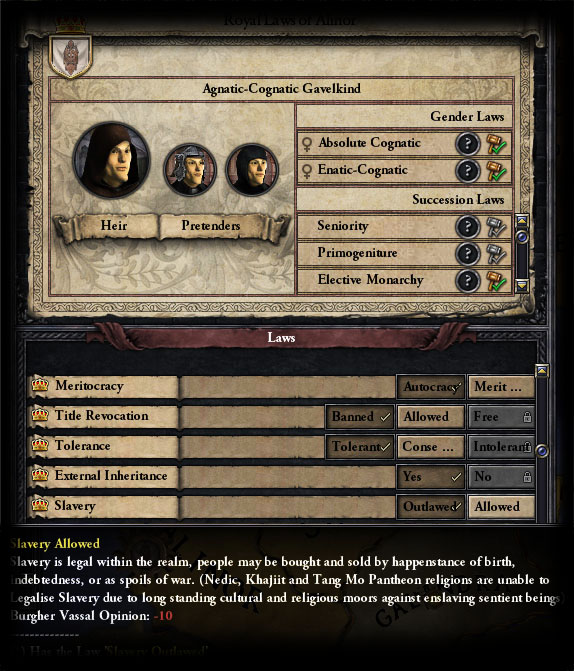 Elder Kings own simplified form of Slavery makes it's first appearance in 0.1.4, allowing Dunmer to raid other realms at will for money and labourers to increase building speed in their own provinces. Morrowind at this time isn't an expansionist state, but through Slavery it can certainly becomes one of the most powerful, economically and militarily. 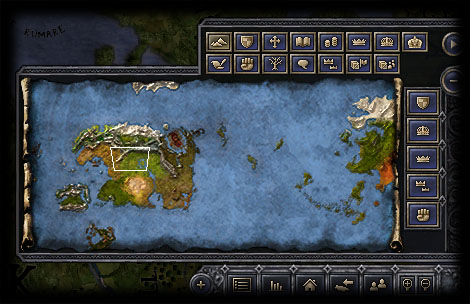 Other features making their appearance in 0.1.4 include cosmetic ones such as a brand new more accurate and visually appealing minimap, new trait icons for some of the existing traits, and new portraits for the Mer & Argonians, with further portrait sets in development for the Khajiit, Daedra & Akaviri Races.

As well as cosmetic enhancements, Amauri, the co-founder of Elder Kings, has been working on implementing some of vanillas systems into Elder Kings in a suitable way. Through the use of the TOG Varangian Guards system, he has reintroduced Guilds to the modification... 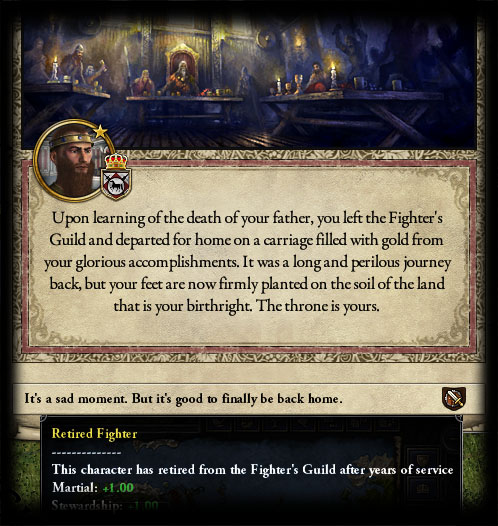 ...those of you who may be panicking that we've rewritten the education system again don't need to worry. Education is still done via vanilla methods but at some point in your child's adult life they may decide to join one of the Guilds. These Guilds has a chance of a beneficial outcome, such as an increase of education from Journeyman right up to Master, or they may have a bad outcome such as maiming.

There are many more changes to be found in 0.1.4, so download and see if you can't best Tamriel's greatest leaders and found your own continental, or intercontinental Empire today!

- [Compatibility] Updated the mod to work with 2.0.1 CK2.
- [Added] Crown Laws and related factions/plots from Project Balance, with alterations to suite Elder Kings.
- [Added] Several decisions related to prisoners from PB (Execute All, Release All)
- [Added] Slavery. This consists of a new Crown Law and a small system tied with it.
- [Added] Slave Rebellions. This is a special type of rebellion that only occurs in realms with the Slavery Allowed law.
- [Added] "Enforce Martial Law" Job action for the Marshal. This is "Assist Arrest" relocalised and given more functionality. The Job Action can now be used not only for it's original vanilla purpose, but also to remove province mods such as Bandits, Thieves, Smugglers, Goblins, etc. It should be noted that it can also remove the normally beneficial "Adventurers" modifier too.
- [Added] Reworked artefact system. Currently only "Mundane" artefacts have been properly reworked, with new icons, effects and supporting framework.
- [Added] New trait icons (Honourable, Dishonourable).
- [Added] Ebonheart Pact and Daggerfall Covenant creation decisions. They differ from existing Empires in that they cannot be anything other than feudal electives, and when they form, joining is optional. (These were really added for the "Alliance War" bookmark that will come later, but might as well add *some* way of forming them through normal play :P ).
- [Added] Hagravens as a female alternative for Briarhearts. Similar conditions to become one (high piety, 50/50 chance of death or hagravens). Also added maintenance stuff to kill any players that try to convert from Hagraven Cults once they become a Hagraven or a Briarheart (:P)
- [Added] New Vampire and Lycanthrope system.*
- [Added] New portraits for the Mer (the older portraits were misproportioned and more difficult to work with for clothing).*
- [Added] New Argonian Portraits (Female, Male and Children).
- [Added] New "Guilds" (Mages Guild, Fighters Guild & Thieves Guild); these are functionally similar to the Varangian Guard in that your child might join a Guild for a few years to gain some experience. They have a chance of increasing their education, gaining stat points or other effects both beneficial and otherwise.
- [Added] Several new titular titles from lore and otherwise (for creating non-dejure Republics and the like).
- [Added] Bloodlines (new flavour traits marking characters as patrilineal descendents from some of Nirn's most famous heroes and dynasties).
- [Added] New Flags (no more placeholders in Cyrodiil, Argonia, Elsweyr or amongst the Mercenaries).*
- [Added] New Minimap, proportionally correct to the Elder Kings world.
- [Added] religious = yes line to many Daedric Artefacts, changing from the artefact's Daedric Prince (for example obtaining the Saviour's Hide and changing from Hircine) will result in the loss of the artefact.
- [Fix] Adopted children not being tagged as children of their adoptive parent.
- [Fix] Some HKs not shifting into Tamriel upon Tamriel's formation.
- [Fix] Duplicate & Misplaced Baronies.
- [Fix] Amulet of Kings Steward Event not firing correctly.
- [Fix] Various position anomalies.
- [Fix] Warlord "Rebels" now function properly.
- [Fix] Court Priest Tend the Wounded & Disease jobs not actually healing.
- [Fix] Dozens more localisation fixes (I'm positive there are still more to find).
- [Fix] Custom Tooltips always reporting fulfilled (this was actually a Paradox fix, but required changing some files).
- [Fix] You can now refuse to buy the puppies for your family.
- [Fix] Numerous other small fixes and tweaks that have been forgotten in the shear amount of work put in to 0.1.4 (sorry :ohmy:).
- [Tweak] Warlord CB now vassalises those of lower ranks than you (Kings will vassalise Dukes, Dukes will vassalise Counts).
- [Tweak] Imperial Conquest now functions correctly.
- [Tweak] Cabals are now permanent until removed (original intention). Court Battlemage (minor title) has an activity allowing them to remove Cabals, the Court Mage job action can also be used to remove them.
- [Tweak] Reman Dynasty has been renamed to the "Dor" dynasty (no more Reman Reman).
- [Tweak] Moved seasonal decisions (Grand Hunt for example) out of nested decisions.
- [Tweak] Made Orgum's religious title a caliphate.
- [Removed] Trade Laws (they had no effects and currently no system to support them).
- [Removed] Loyal, Disloyal and Rebellious traits. The former two were unused, while the later is no longer necessary with the removal of the "hardcoded" long reign bonus.
- [Removed] Several unused religions, specifically the seperated Aedric Cults. Ultimately I felt these were unnecessary and they aren't being used anywhere in the mod.

Currant version of steam crashed with mod. (other DLCs, old gods, and ruler designer. I installed the no rome version.)

Great news guys, thank you for developing this mod.

If you click on any Argonian character when selecting your game will crash?

the same by me

You need the african portraits DLC for 0.1.4. This requirement will be removed in the next version though.

I do though and it still crashes.

Must be a zbus error.

Maybe will be better to divide dunmers on great houses?

And why Akavir so big?

How do you mean big?

Amazing! I love this mod!

Have you guys fixed the issue with the female Khajit? Last time I downloaded the mod female khajit had the picture of a lion. I asked about it and you answered here on moddb that it would probably be done during the summer.

Soooo 2 days after you release this mod, CK2 makes a new patch. Is it compatible? with 2.02

that's paradox for you, lol.

But hey, now we've got working jews! jewelry stores and banks all across europe!
To bad that there's not a single jewish place ingame

I just want to say this mod is absolutely amazing