Welcome to a session to familiarize with the really old mansion Disponentbostaden in a small hamlet named Carlfors in Sweden. This is my first project, a fully isolated conversion custom story where some parts are based on real events that allegedly occured inside the mansion. It does require the Justine patch update, do not forget to install it, or the story will not be playable. I hope you will enjoy my story if you give it a try, and, do not forget to have a fully cleaned box of underwear, they might be needed if you're not a tough one.

It has been a long road from the beginning of this project, a road that finally have come to an end. Today, I am releasing my very first Amnesia project!

It has been a long road from the beginning of this project, a road that finally have come to an end.
Today, I am releasing my very first Amnesia project - 'Disponentia'.

When I started the project, I did not know anything at all about programming. Easy functions like 'unlocking a door' took several hours to rig and I did a lot of evil-boding mistakes that took even more time to 'clean up' and fix after the project had been going for a while. An example would be when I had to remap all the walls in the mansion to improve them - it took over six hours - time that could have been used for something else.

Much time has been used for all those mistakes, but you learn by your mistakes - which is great.. One thing I have learned, is that creating a sketch over an idea before creating it is very helpful - you save a lot of time and it will probably turn out a lot better than it would without the sketch.

All new knowledge I have received will be used in my next project. To create even better stories, I will need your help. It would do a lot if you could point out some bad and good things you discover while you are playing Disponentia and write them down on ModDb or send them to my email. It is really hard as a developer to have any clue if your story is good or not when you can't assess it objectively. It will be interesting to listen to your thoughts!

Disponentia is a story that takes place inside a mansion that exists in reality. The story is based on some events that allegedly occurred inside the house and it is designed to emulate the real mansion as much as possible. For example; all custom paintings and some floor/table/wall textures are photographed inside the mansion and imported into the game. 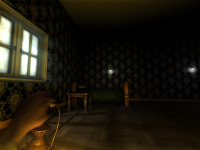 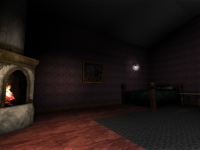 My major goal with the story was to create a realistic story with a unique level-design while trying to build up a decent , uncomfortable atmosphere with a balance between psychical and physical events. I was also focusing on quality more than quantity - creating a really compact world and avoiding the common phenomena where you need to explore a lot of rooms with no- or no really practical function.

There might be a second chapter of this story. I am not sure when the project will go off, first I will have to see how hard college will be during my first period.

You will need the expansion pack 'Justine' 1.2 in order to play.

Thanks, it seems very interesting, going to try it asap.