This update is the best one yet although I haven't had time to do some of the things I've planned for it. It's still a really huge and needed update.


Time for Beta 08 of Dibella's Watch. Unfortunately, I didn't have time for all the stuff I planned for this one, but it's still huge enough to be of interest. I've installed a prison on the island. That means that there's no more just stealing stuff without paying a fine or indeed paying time behind bars. Be sure to note your fellow inmates' name as well, to see why serving time in prison in Dibella's Watch is even more uncomfortable than in regular Tamriel.

I am now colonizing the western areas that were built in the previous update of the mod. I've done a lot of rainforest in the south west already and these areas are inhabited by scary beasts as well as the so-called Woodlander Tribes. These are skilled archers and they also get their own good equipment in the form of a new bow and armour. There are several other new meshes and models too; weapons, clothing, armour and even a new creature. Masses of landscaping has been done, of course, and a lot of corrections. I've also integrated all the updates into ONE, easy to install .esm-file this time.

One of the things I didn't have time for was installing bed-rental in the Dibella's Watch pubs, taverns and inns. Here's a little tip to remedy that. When you've conquered a Deadlander or Woodlander encampment, you can use the bedrolls inside the tents there to level up.

Download the latest version of the mod right here on ModDB.

Note that the load order of the mod is still sensitive. There's a text-file supplied with the download that explains step-by-step how to install and get it all running according to plan. Now enjoy the update while I continue pasting trees into the rainforest. It will be even huger! 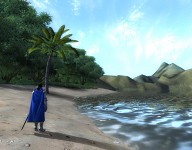 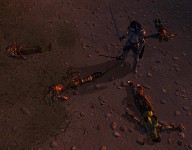 A view from the new rainforest area and a screenie of good-looking corpses.

- Merged the previous updates into one .esm-file.
- Did numerous minor corrections and additions.
- Started the landscaping of the newly created western areas.
- Did balancing of creatures, armours and weapons and such things.
- Created a jail. No more stealing stuff and being let off by the guards. Now you will go to prison.
- Added capes and cloaks in different colours to decorate NPC's. Redressed many NPC's as a result.
- Added a new weapon, the Crusader Sword.
- Added Woodlander armour and bow.
- Added Wheelbarrow and Palisade meshes.
- Created Woodlander Bandit Camp in the Western Great Forest.
- Added several new creatures and enemies to fight all around the continent. Among others:
- Added a new creature, the Tiger, which inhabits the western areas.
- Added Jungle Trolls to the Far West as well.
- The Civilized East is not so safe anymore. Added some Highwaymen to the roads.
- Wrote another in-game book "The Lost Crusade".
- Updated the in-game map. I'm still not satisfied with the coordinates of the markers, but it's a WIP. 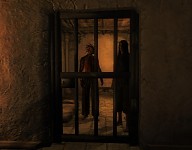 If you don't behave, you go to jail.

One of my new favourite things is reading through the changelist in your updates. Posted about it at Modsentry.com as usual, keep up the incredible work!

Thanks, man. I love your reviews!