The most advanced TQ mod to date, Diablo 2 Immortal introduces unique new skill mechanics and elaborate balance systems to combine what people loved about Diablo 2 with the possibilities of Immortal Throne. Play as an Amazon, Barbarian, Sorceress, Necromancer, Assassin or Paladin - or any hybrid combination of them - to experience both games anew.

The final big update to both D2 Immortal and its sister mod D2 Lilith comes with a huge list of improvements, and finally completes what had been planned out over 2 years ago. It adds the last remaining class to the roster, and also implements every single idea and fix that has come up since. 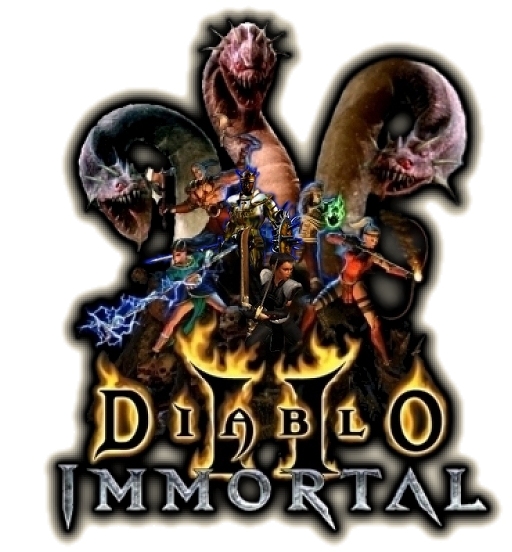 
The last big update to Diablo 2 Immortal comes with a huge list of improvements, and finally completes what had been planned out over 2 years ago. It adds the last remaining class to the roster, and also implements every single idea and fix that has come up since.

Aside from minor additions and adjustments that may follow, it is safe to say that D2I is now officially done. - And the best version ever!
Naturally, its sister mod Diablo 2 Lilith also gets an update with all compatible new features.

For details and more information about the mod, have a look at the Development Thread. Comments and questions about earlier releases can be found in the repective release threads.Thanks again to everyone who contributed!


Special thanks to everyone who actively helped with all these things. Especially to the Spanish and German communities for their translations, and to Jaelrin for the bulk of the testing.

* Small 4:3 resolutions show a black bar behind the skill menu
- Native to Kirii's UI, which mine is based on. Just use another resoultion.

* Relics cannot be attached to javelins
- Current state of the art for 1h ranged weapons. May never be possible.
- Though they are strong regardless, one can use the Defiler's "relics in all" mod to allow it.

* Using the "Mod" option in TQVault shows proper item pictures, but fewer characters.
- That option is only designed for mods started directly from "custom game", like Lilith.
- Use the regular Vault to transfer D2I items. You can distinguish the [?] by their Tag names.

As the name suggests, D2I is built upon the Immortal Throne expansion, so use it with normal TQ at your own peril. Loading it over a modded base game is possible, and usually works, but do so at your own risk. Camera mods etc. are fine.

Though D2I does fix many issues of the original game by itself, and all files it does include are of the latest version, it is also (generally) recommended that you get the Bugfix Fanpatch.

If you like this mod, please rate it to spread the word.
Also, come visit our subforum at Titanquest.net!

Holy crap! This looks great. will have to re-install TQ now.

Where can I see the main differences between this and Lilith version (one big difference being the story and map change of cource) But I want to know details like, are the new bosses in Lilith or the unique diablo 2 loot and so on?

Everything that fits is also in D2 Lilith. Chest lootables are being shared anyway, and all D2I bosses and most heroes have been built into the Lilith storyline - which makes some of them appear much earlier than in D2I, btw.

The only things D2 Lilith does not have are some changes concerning the normal monsters, which are still mostly Lilith's own. (That mainly means that they have their old resistances.)
Even so, they already drop dexterity weapons, and many of them also received the new skills of their D2I pendants.

And, of course, things specific to the TQIT map, like the secret passage and one secret endgame quest.

You can find the adjusted update list in the D2L thread at Titanquest.net

Thanks for the info, that eased my mind. Btw I'm loving the paladin and trying to get my brother to play D2I Lilith with me, Away from DIII for a while.

Two small, cosmetic updates that will be part of the 1.61 fix patch but can be applied already without changing versions:

Those .arc files go into either mod's /resources folder to replace the existing ones.

One includes a nicer (more diffuse) aura effect for the Valkyrie.

The other adds -at last- a custom made animation for the Staff Attack, instead of the more or less fitting existing ones that have been used before.
With this being the first skill people see of the mod, it was about time it looked good.