Happy Holidays! Over the weekend, the Desolation team released our first gameplay video, a soundtrack mini-album, and a reveal of the mod’s main character! Read on to find out more in this major development update.

Happy Holidays! Over the weekend, the Desolation team released a number of treats and surprises for fans, including our first gameplay video, a soundtrack mini-album, and a reveal of the mod’s main character! Read on to find out more in this major development update.

In the Gameplay Reveal video below, you’ll see your first glimpse of Desolation in action, featuring action-packed puzzle solving with our brand new cybernetic Portal Gun.

There’s a ton of details unique to Desolation packed into this video. One of the first things you’ll notice is the new environmental style which we call “Industrial”. This style features open test chambers built into vast mined-out caverns. Constructed in the 1990s, Industrial serves to fill the gap between Old Aperture and the modern Enrichment Center, with the chambers built using modern materials assembled by human construction workers rather than by machines. This means the reconfigurable panel arms associated with the Enrichment Center are not present: the structures are rigid and formidable, resulting in a starker appearance. The visuals are further enhanced by our suite of new graphical features which help bring the Source Engine up to date, such as PBR (Physically Based Rendering) and a new tonemapper. 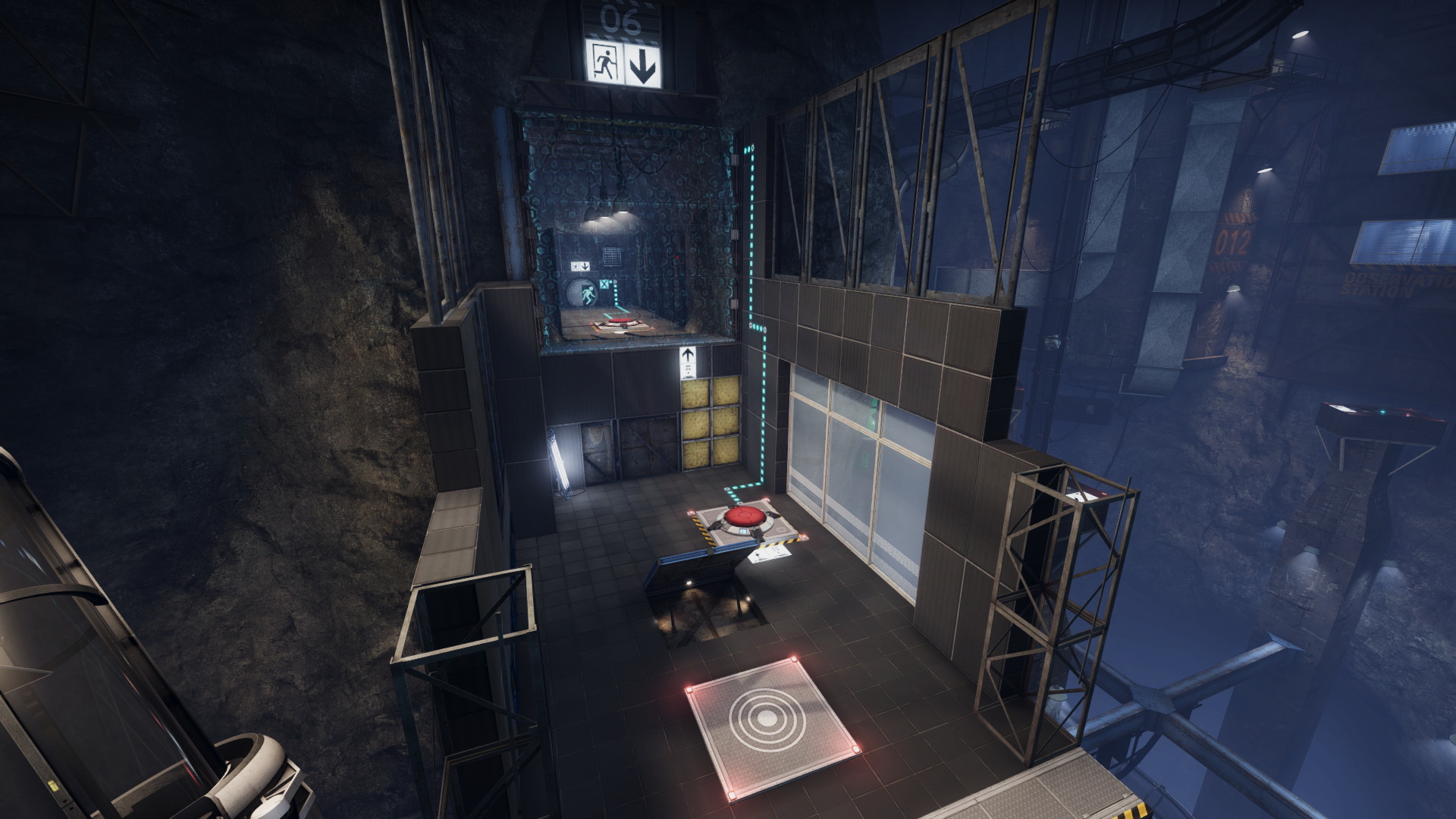 The gameplay in the video features Chain, one of our exciting new test chambers from Chapter 3 which focuses on faith plates and momentum. Don’t worry if it looks complicated: there are a number of puzzles leading up to the one showcased that teach the mechanics used, and while the player in the video solves the puzzle quickly to amplify excitement, in-game you can take the time you need to plan your moves. The intention behind the puzzles in Desolation is to provide cerebral challenges with satisfying solutions, spiced up with inventive manoeuvres and new test elements, all assembled into a carefully-tailored gameplay curve which teaches you how to be a better puzzle solver as you play. 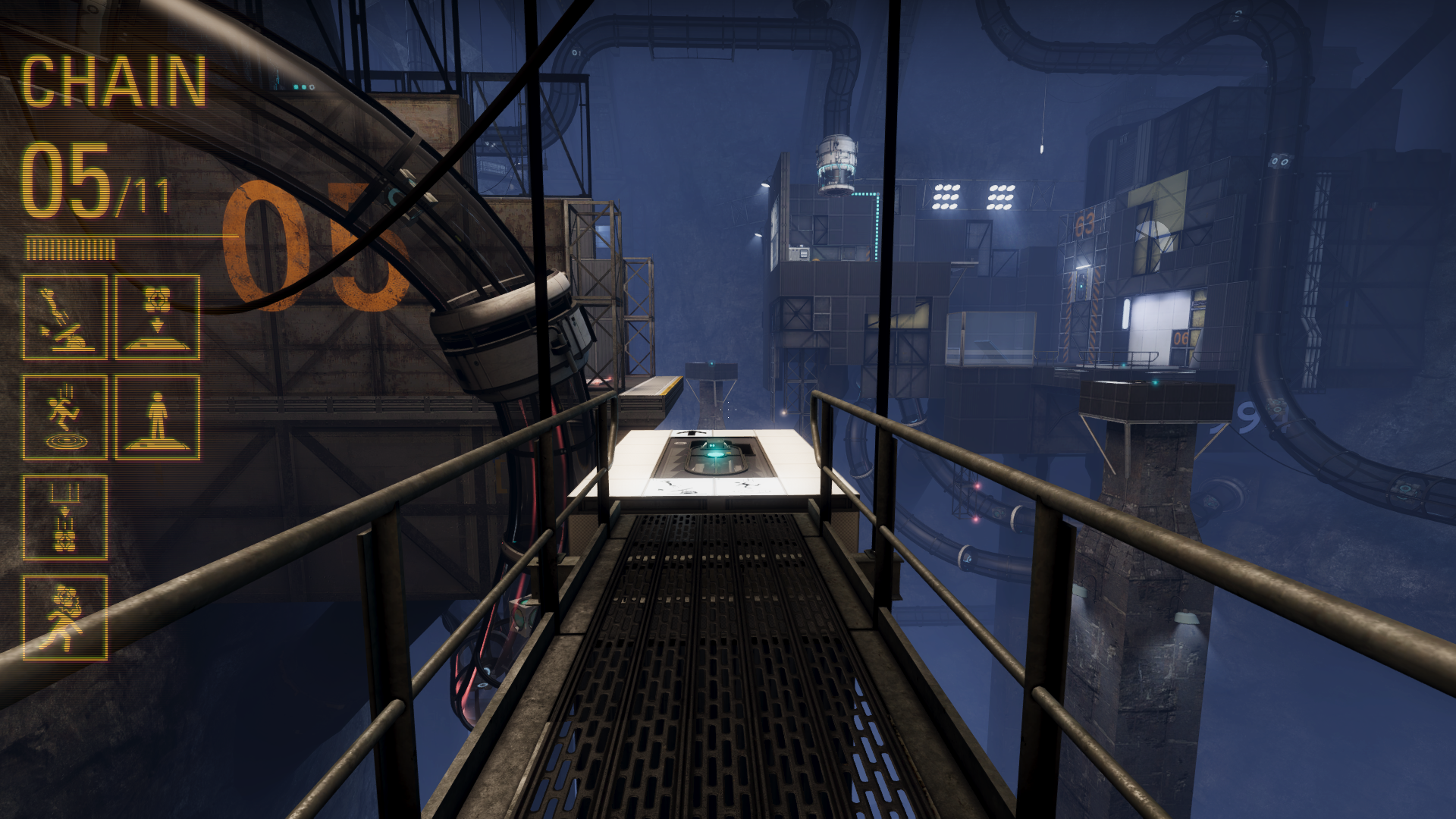 You may have spotted a new gameplay feature: a HUD overlay which appears at the beginning of the test chamber detailing the chamber name, number, test track progression, and test elements present. Think of it as an evolution of the iconic test chamber signs seen in the existing Portal games. This HUD is also available in the pause menu so you can always remind yourself of the current chamber’s key info. 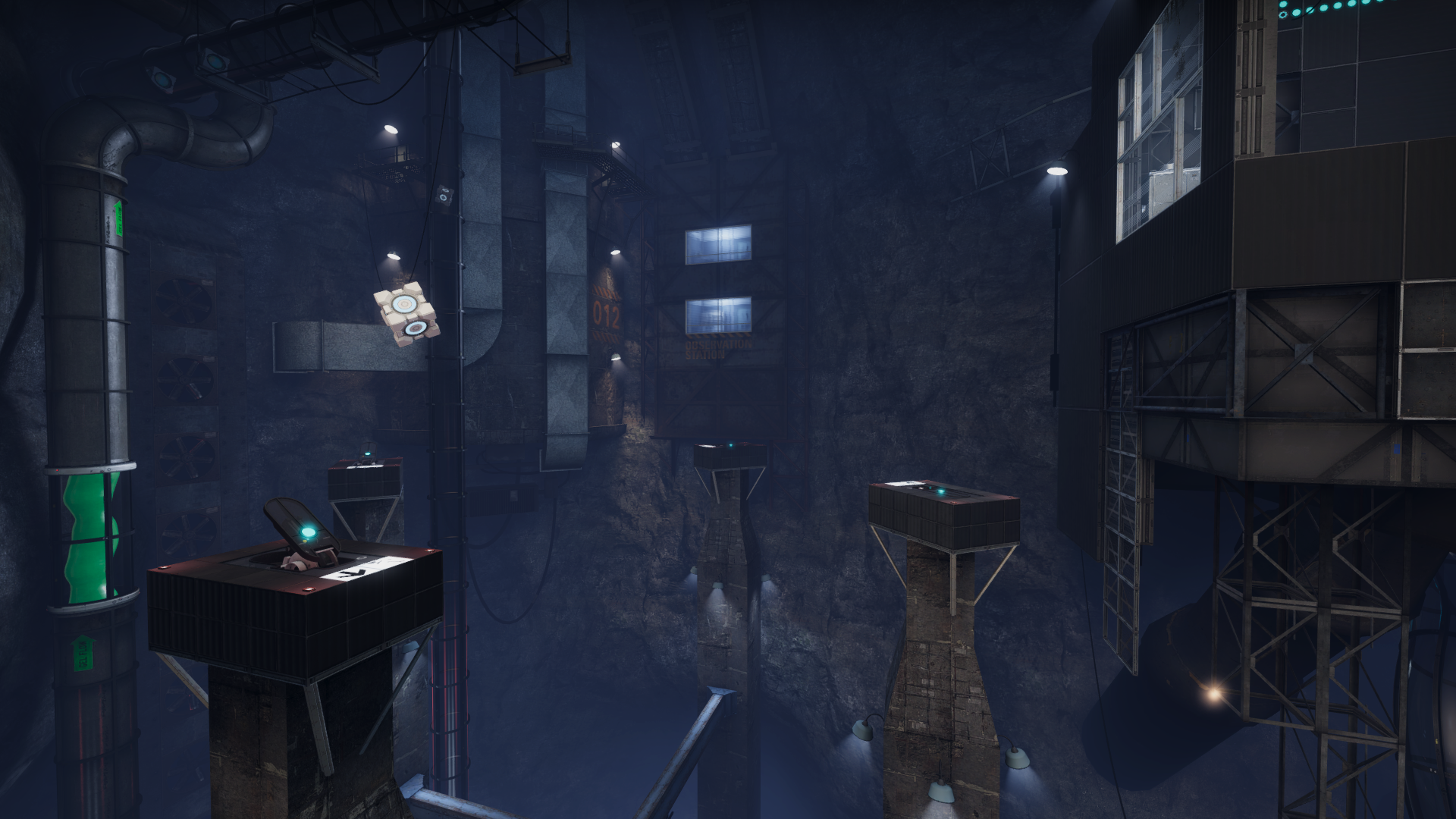 Listen out for the dynamic music, which not only reacts to the player’s use of elements, but also evolves as the puzzle reaches new states of progression. Also on the audio front, the video features a bevy of custom sound effects including new footsteps, new portal sounds, and a percussive flourish when the Chamber HUD appears. 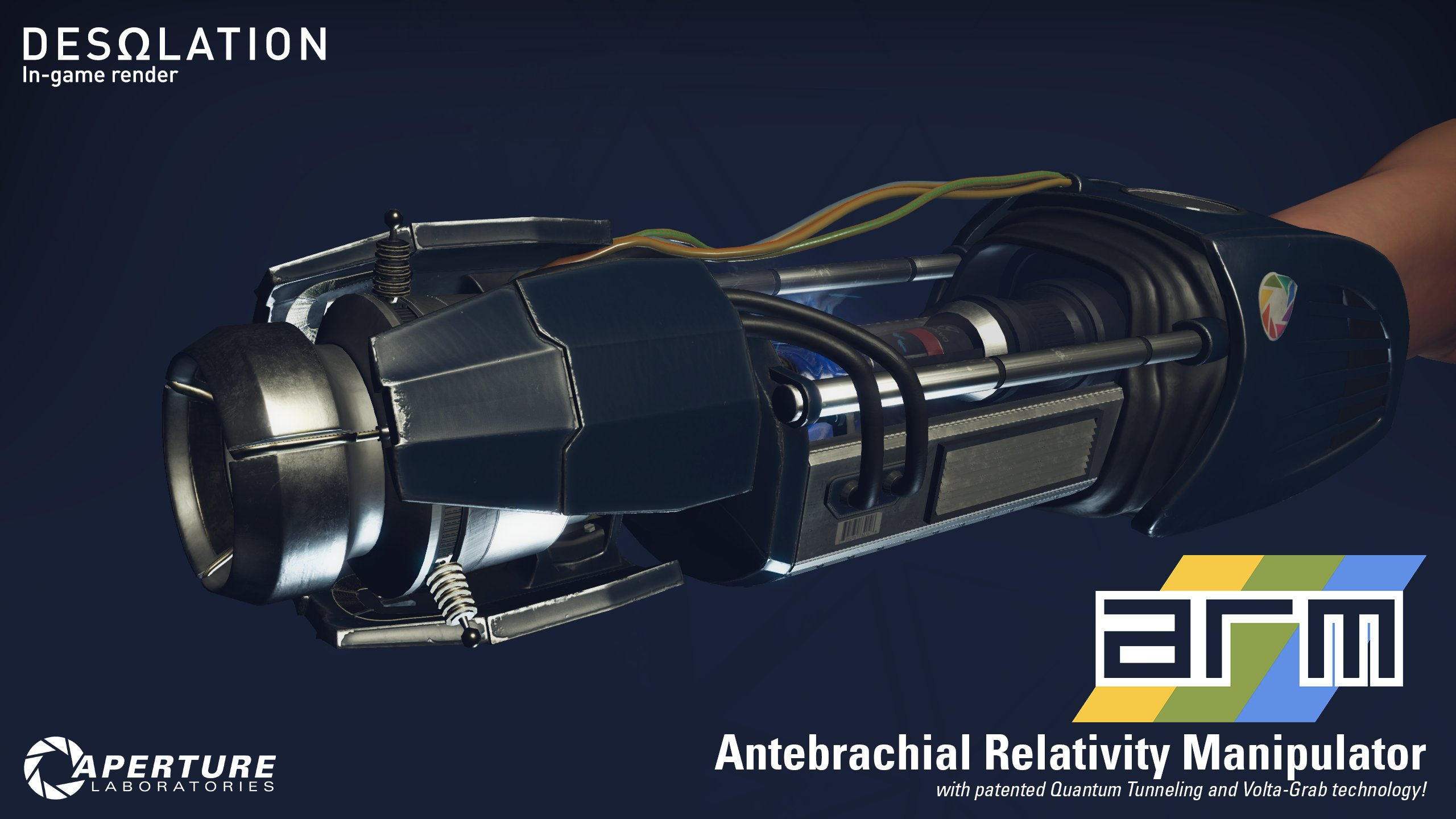 The star of the show however is our new Portal Gun known as the ARM (Antebrachial Relativity Manipulator). Part of Aperture’s BRACE cybernetic system, the ARM is an integrated Portal Gun that replaces the user’s forearm. With its smart blue finish and proudly displayed black hole power source, you’ll be solving tests in style! Since the ARM is 1980s technology in-universe and Aperture soon began to market it as a consumer product, we decided to draw inspiration for its design from the look of real-world consumer tech from that era. ‘80s sports cars were a particular source of inspiration: note the tapered rear grille, and how the opening flaps at the front of the ARM mimic the pop-up headlights found on some of the most desirable vehicles of the time. 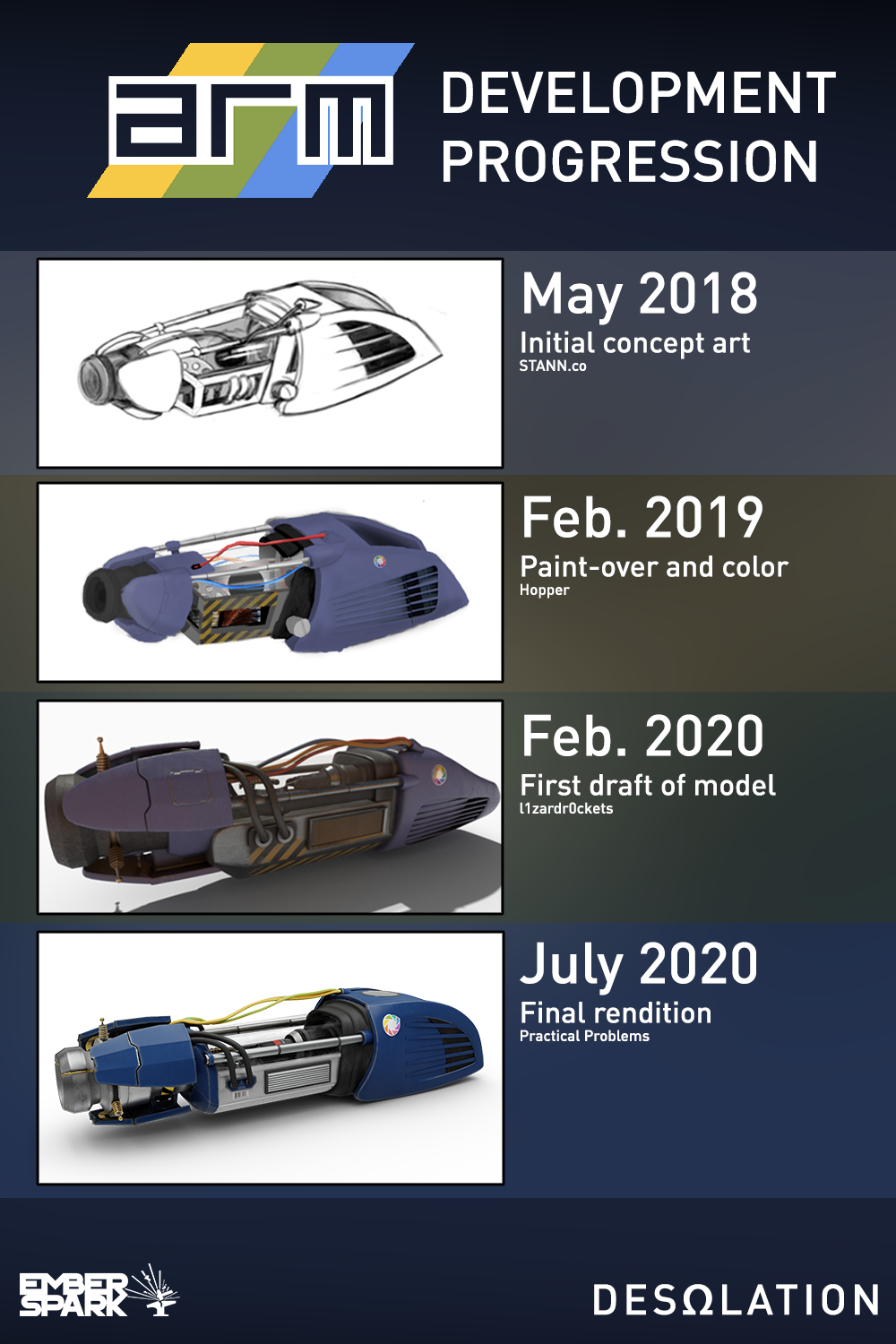 A mammoth amount of creative effort and enthusiasm went into the design of this new Portal Gun, as you can see in the image above. We wanted the ARM to be as believable and tangible as possible, while still being awesome to look at. From the spinning volta-grab coils that surround the barrel, to the Portal dye injector inside the black hole chamber, every element on the gun serves a purpose. With the ARM, we knew we were showing the inner workings of a Portal Device for the first time ever, so everything had to be functional and interconnected. It was almost like designing a real Portal Gun! 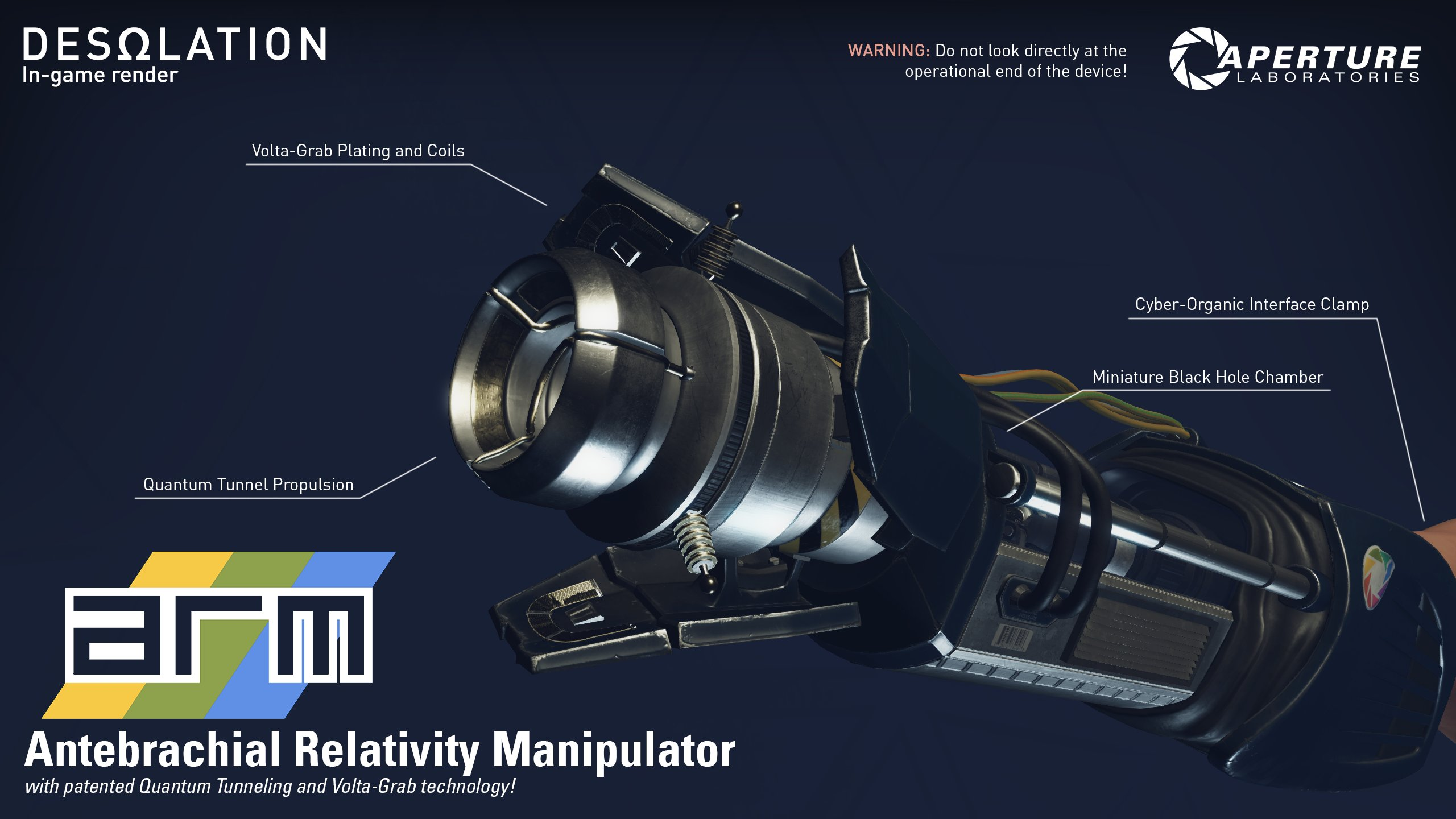 The ARM is a component of a larger Aperture cybernetic system called the BRACE (Biological Restoration and Automated Corporal Extension), which features a whole suite of robotic upgrades designed to enhance and replace various parts of the body. There’s the ARM, as well as integrated long-fall boots known as Tibial Impact Negators, and a bionic eye called the Optic Perception Spheroid. You can look forward to utilising all of these BRACE modules in-game! 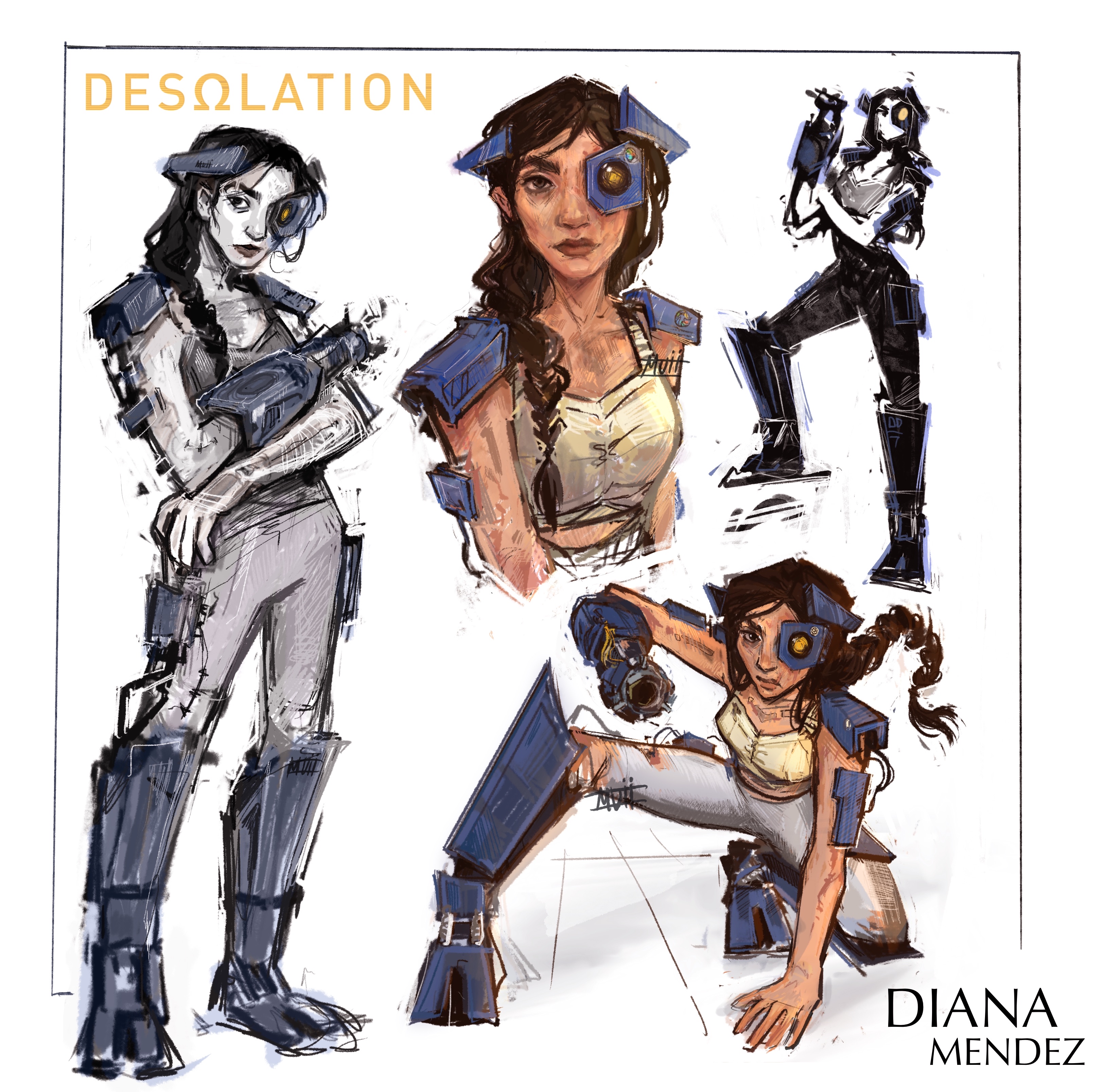 You can see these BRACE modules in context here, fitted to Desolation’s player character Diana Mendez, who we were thrilled to reveal on Saturday with this stellar character artwork by our concept artist Muii. The idea of a cyborg character is something never before seen in Portal, and it offers intriguing narrative possibilities which we will certainly be exploring in Desolation. Since Diana is a silent protagonist (in keeping with Portal tradition) we wanted to ensure that her nuanced character was conveyed purely via her visual design. She’s anguished yet resilient, vulnerable yet determined, irreversibly fused with the kind of robotics that make up the very fabric of Aperture itself; she’s not just in the facility, but melded with it. From her striking and dynamic poses, to her distinctive silhouette, to the small details such as her braided hair and scars from augmentation, we think Diana is a truly unique character who really stands out among the existing roster of video game heroes. However, we’ve also striven to ensure she feels real and human. Plain clothes, a weary yet resolute expression, and little-to-no makeup coalesce to make Diana feel grounded in reality. At the heart of every story is a compelling character, and here’s one who’s inherently fascinating without ever saying a word. 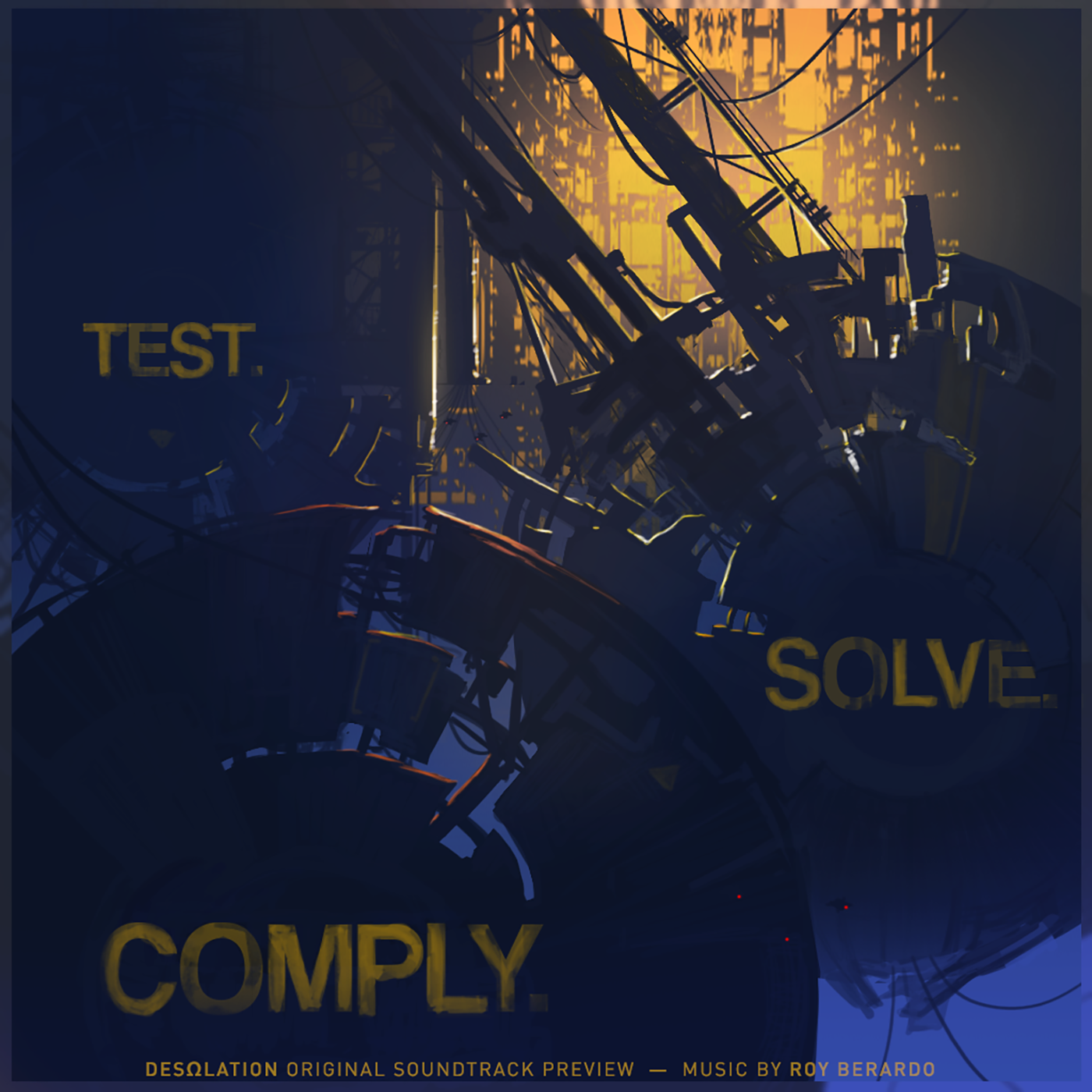 To further immerse you in the world of Desolation, our composer Roy Berardo has written a phenomenal dynamic soundtrack to accompany the game, and we've just released a mini-album featuring 3 full tracks from the OST for you to enjoy. This album, called “Test. Solve. Comply.” is available now on YouTube and Bandcamp, and we’re aiming to release it on other major music platforms soon. The creative vision behind the soundtrack is to both evoke and evolve the Portal musical style we all know and love, aiming for a darker, more imposing yet emotional tone to match the story. The tracks you’ll hear in the mini-album are ambient music with a kinetic edge, designed to accompany test chambers. We aimed to strike a balance between attuning to the player’s excitement while also allowing them to focus. In-game these tracks are fully adaptive, shifting and expanding as the player progresses through the puzzle. Though the mini-album focuses on puzzle music, the full in-game soundtrack also features recurring leitmotifs written to underscore key story moments and characters -- even each unique test element has its own distinct motif! 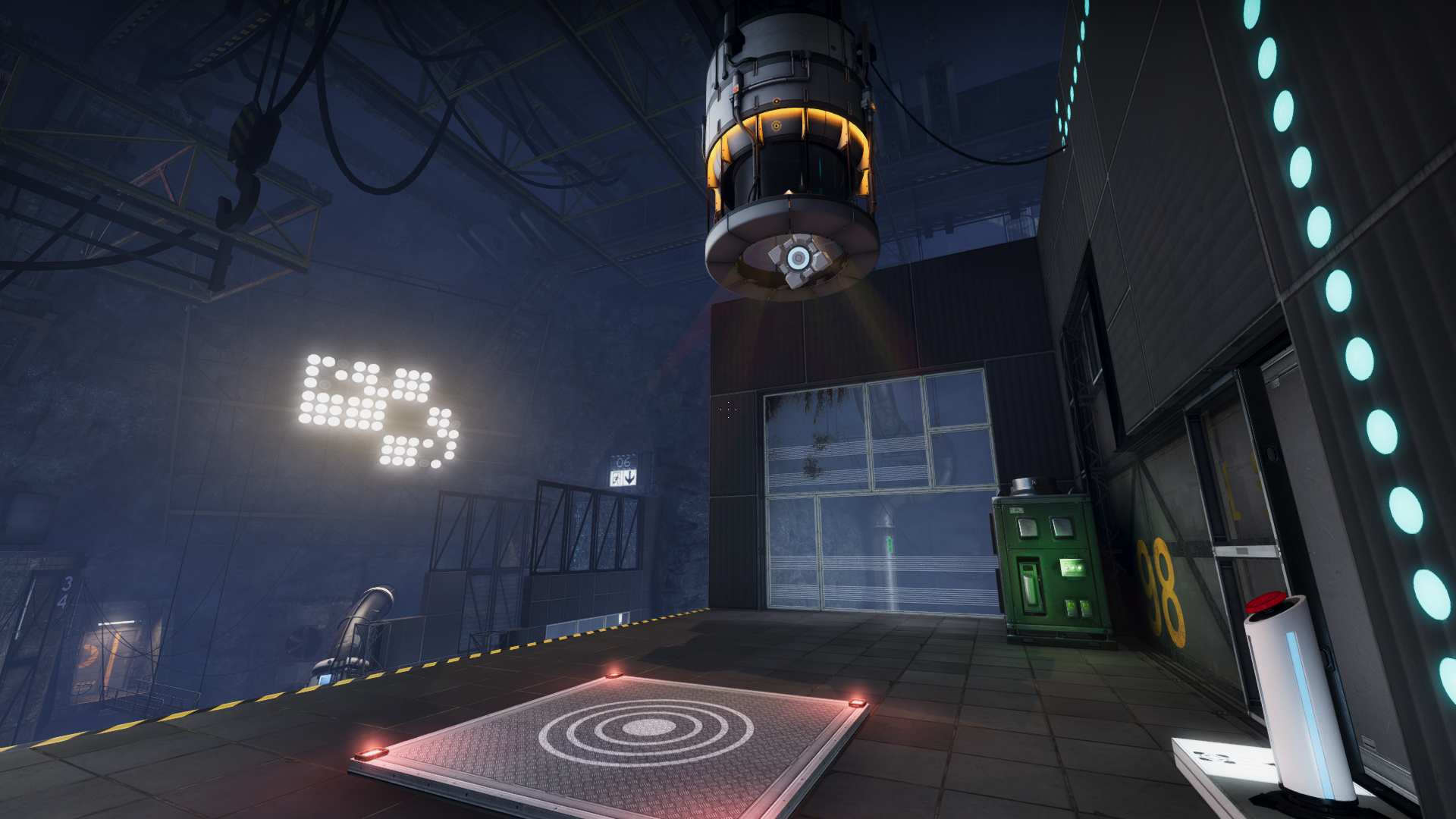 As Desolation’s Creative Director, I’d like to offer my heartfelt thanks to everyone who engaged with our teasers and previews on Twitter, YouTube, Instagram, Reddit, and Discord over the course of the weekend. Those who left lovely comments, gave uplifting praise and constructive criticism, shared our stuff with their friends, and even those who simply quietly enjoyed it. We here at Emberspark Games have been overjoyed at the overwhelmingly positive response: this was our first time properly revealing our vision for Desolation to the public, and to be met with such an ecstatic reception from fans is a genuine delight. Our game is zero-budget, fuelled purely by passion and creativity, and your appreciation is the truest reward. From one Portal fan to another: thank you. 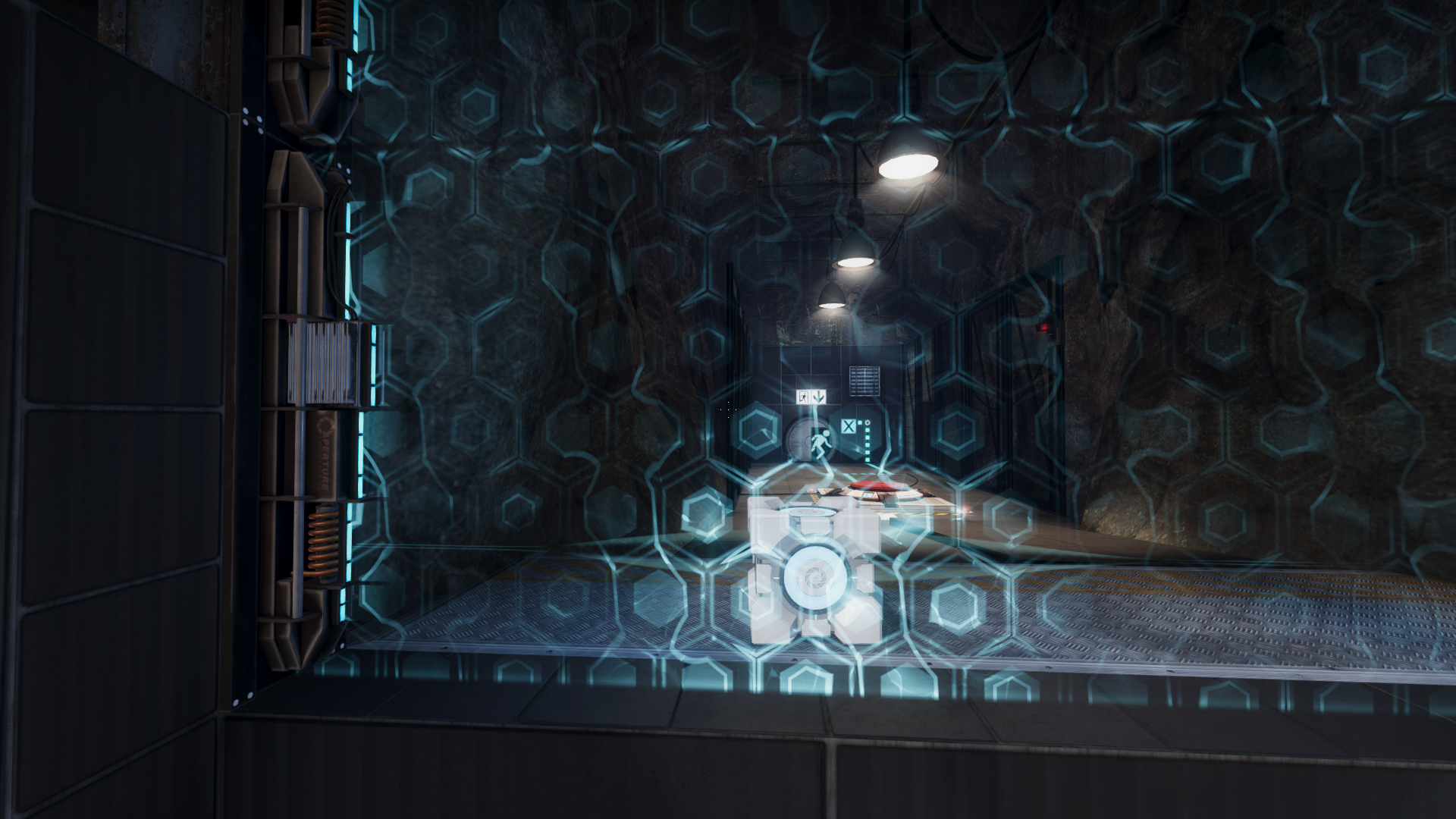 I’d also like to personally thank and congratulate every single member of the Desolation development team for making this all possible, pouring so much dedication and ingenuity and talent into this project as a whole and particularly this Preview Weekend. Desolation is a labour of love, a true collaborative effort, and the ultimate passion project. Release is still a number of years away as there’s plenty of work to do -- levels to design, music to compose, dialogue to write, artwork to create -- but we look forward to every single second of that journey immensely. We hope you do too, as we’ll be doing plenty more big reveals and treats for you along the way! 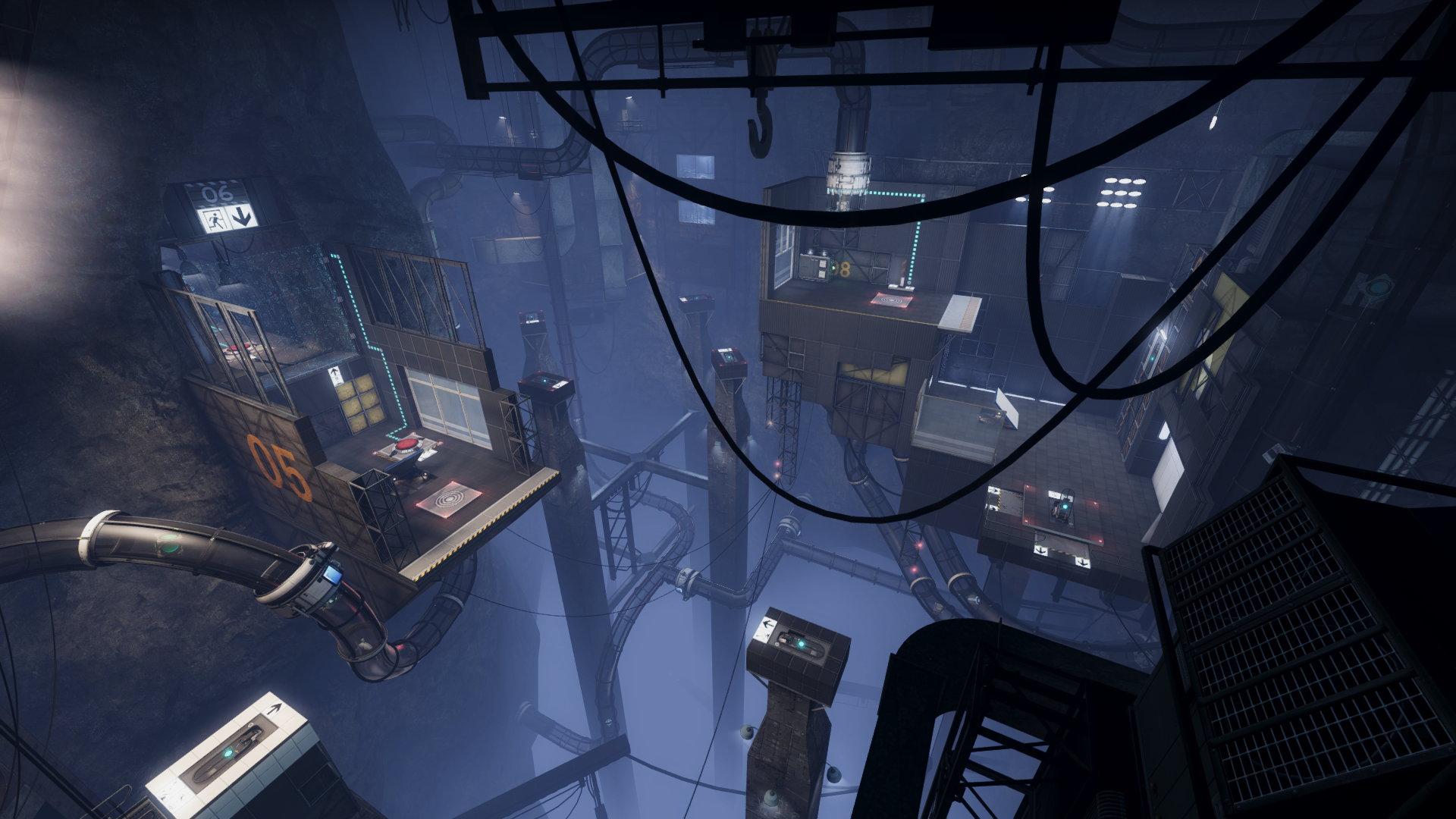 This can be described with just one word: Epic!

Here's an idea: Instead of having to bring up the test chamber HUD via the menu, how about adding the option to bind a key to the ability to recall it briefly? It's showing up because it's a cybernetic enhancement. Being able to call it up without having to pause the game might be more immersive. How's that?

This is looking great so far

You guys are kicking! Loving your work!

what ever it is i love it

Might have missed this last month, but holy hell am I glad to have noticed this. This is down right AMAZING!

I wonder if those augs are water resistant?
I mean can you take shower with them?

Is this game going to have voice acting?

Yes, and plenty of it :) The dialogue script is over 100 pages long!

Will not leave any feedback here lol. just keep doing what you're doing and this will end up as a fantastic mod.

I have to say though... that album art is so awesome, if you guys sell it as a poster I might buy it :P

Is there any timeframe to when the game may release? I'm loving this mod already!

Thanks! No idea when we'll release :P It's a volunteer project we work on in our free time, and it has a huge scope, so there's no way of knowing when we'll be done. One day!