Welcome soldiers to the new battlefield. In the battlefield that awaits you, you will find strange new weapons and physics that seem to defy law, but worry not soldier, you're not alone. For we all have seen these bizarre things and have decided to stand and fight along side you. If you find yourself alone, flying through the air, worry soldier, for you are not superman, but are about to die unless you pull out your parachute.

So what is the Tactical Ballistics Mod? The Tactical Ballistics mod is a 100% server side mod that provides new weapons, vehicles, maps, and game modes. The clients need not to download anything before connecting to the EMS Gamers server. Everything is transferred to them right before they get to the spawn screen during the verifying client data section, where it will take longer to verify data as it's being transferred and loaded into your system. This data is then cleared upon disconnecting from the server, so that you can go to another server without any issues.

Currently only one server runs this mod, but I am looking for the right sponsors who will want to run different versions of this mod. The one great thing about this mod is the fact that it's always updating with new weapons, bug fixes, map changes, etc, all in real time without the players knowing it. They can connect one day and play another day and have completely different weaponry, which makes this mod stand out among the rest. We are 100% catered to the public fan base, so if you got an idea that you would like to see in the mod, then shoot us a PM or post in our forums and if it's a great idea, we'll add it!

For more information on what the mod offers, just connect to EMS Gamers @ 174.36.220.184:17567 or download and open the PDF file which gives full explanations on each new item and how it relates to the game. We are currently looking for video editors to make a fantastic video for this mod so if you got the skills, then we could use you! So in the mean time, we'll see you on the battlefield!

Tactical Ballistics Mod - "Changing the battlefield, one life at a time."

A Video that I thought was our mod, but isn't. Anyway, Cool to watch anyway! Enjoy!

Heads Up Guys, We have zombie Videos! They are starting to pour in. I'll start with this one!! Enjoy!

New Screenshots AND a New Release!

Hello 2142 Fans! I have released the all new, finished, Zombie Community Mod! This is 100% completed and ready to be played. I am also releasing the server files here shortly after the smooth release of the client. So first we are releasing the client, THEN the server files. Strange eh? I wanted to try something different. Screenshots are up so enjoy them! I have a dedicated server up so everybody can enjoy the mod!

Players will find the standard co-op bug still present that will cause the server to crash at random times. HOWEVER, most players can avoid this by simply creating/playing single player or lan games, but not as fun. The client download should be available here in a few days. Enjoy this new mod 2142 fans! As this is my going away present. I am laying down my walker and stepping out of the battlefield to create a new game for a special engine. Hopefully you guys will also enjoy this new game as well.

More screenshots can be found here:

Those screenshots also contain the in-game process screenshots of the mod over the last few weeks. Most players will enjoy the new flame thrower, which is more realistic than it's predecessor. This flamethrower has dynamic fire and smoke, unlike the previous versions where it was simply just a static fire model. What does this mean? It means that the fire and smoke go in the direction of the wind.

Global wind has been added to many maps. Global wind is a new feature that I've added to 2142 that mainly only applies to grenades and other slow moving, light projectiles. The wind will catch the projectile and make it soar through the air if you throw it straight up. Kind of cool to watch, but annoying if that grenade hits a fellow teammate.

Here was an attempt at a laser sight/red flash light for the sniper. It never made it into the mod because it lagged too badly and didn't project on half the materials. Shame as it would have been enjoyable to use.

This is a meteor WMD (Weapon of Mass Destruction) that was in the previous builds. The code is still present if any server admin wants to unlock it and assign it to a weapon. I since removed it from regular game play because I felt that one WMD was enough (the Ballistic Missile System). However, if any admin wants to unlock it, simply change the projectile of a weapon of your choosing to AAGuided_Missile , where the meteor is stored. 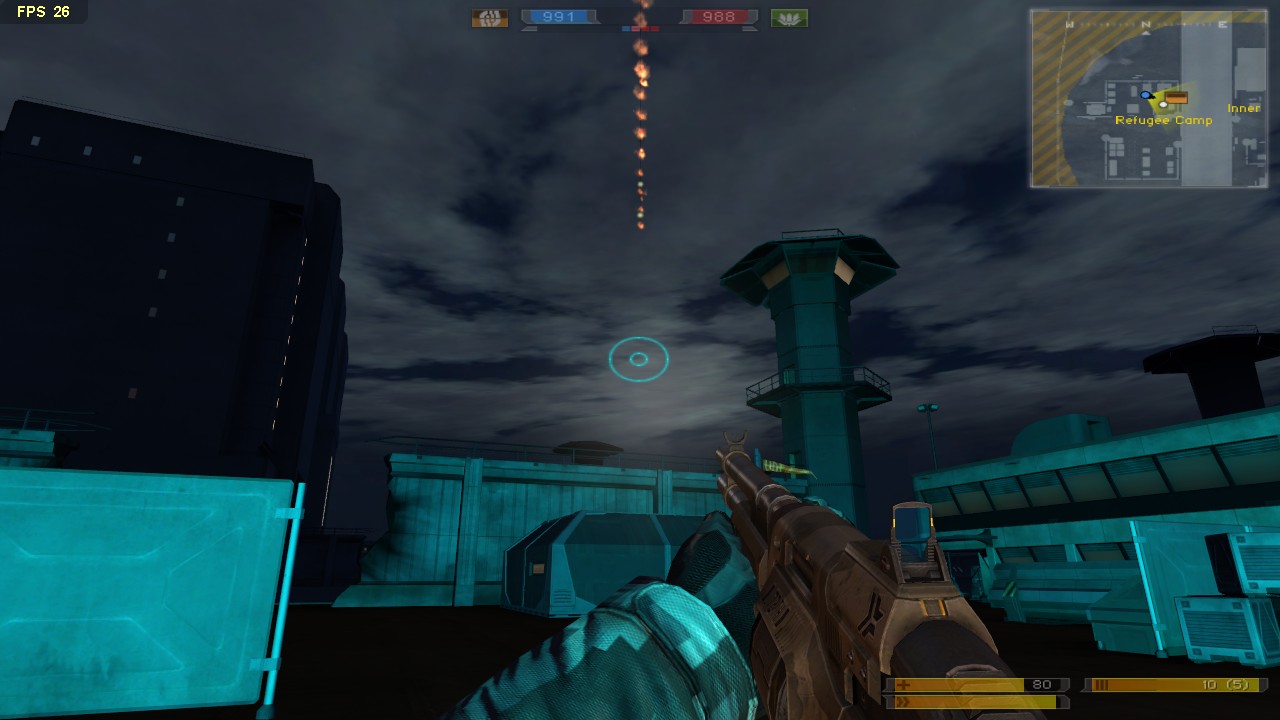 For more information on the mod, please read the readme provided with the mod. Oh, and one last thing, in the readme, please ignore the section where it was MD5 files. I since decided to remove those as they kept causing mismatches. So all MD5 files have already been removed and are not present. If any admin wants them to be added, please create the MD5 files, send me the new (verified and checked) MD5 files, and I will redistribute those files for clients. Until then...

I am out!
A-Train

First off, let me say that there are new videos up! I am also in the process of uploading some in-game videos of some intense action on the battlefield...

Hey all! I just wanted to make a special post pointing out the new fan videos on the site. These were all submitted to me over the last 2 days. Enjoy...

As some of you may have already seen, there's an all new version of this mod on the server now. The new version adds all new weapons and defenses to Automated...

More Videos to come! This is a fan based video of this mod! Enjoy!

This version of the server allows server admins to host conquest version of Zombie Community 1.1. It is recommended that conquest be hosted if server...

SERVER FILES ONLY! DO NOT DOWNLOAD IF YOU'RE NOT PLANNING ON HOSTING THIS FILE ON A DEDICATED SERVER BOX!

Since I found a major bug that I forgot about (adding single player), I have to release an entirely new FULL download and not a patch. I also had to change...

This is the server files needed to host a zombie community mod for version 1.1, which is hopefully the last version needed. Note to admins: The modmanager.con...

I finally leave the 2142 relm to move onto better games. The last 4 years of modding 2142 has left me with some of the craziest mods that I've ever made...

Hello Fellow Zombie Fans! I once again come before you to release the next latest greatest version of the zombie mod. Last version had some pretty nasty...

This mod looks like something you see when your high. Nothing makes sense anymore XD

It looked great, but I would much rather play with other players.

It's too bad that the servers are gone.

Is there a server for this mod?
It's amazing!

My name is solgerboyr34 i said ****** to one of my clan members coz he killed me some how is there any chance of unbanning me thanks...?

uhm, sorry but, a few minutes ago i got banned from *EMS* tactical ballistics server for no reason and i have not cussed or do anything, i was playing normaly, it kicked me and then i couldnt join, it said you have been banned by an admin or a succesful kick vota... help it was my fav server

is there a server which run through out the day till 8.am to 9.pm?