CI is a Half-Life 2 modification that centers around the events directly after Half-Life 2 (during/after the Episodics).

Hello everyone, It is that time yet again. This update will see the rise of a lot more work completed then the past two progress reports combined. However more could have been done and we have hit a very major snafu with our source code. But I will get to that later on.

I got quite a bit done on some maps this update cycle, the Underground Bunker, Floor 2, is nearly done structurally. I just need to fix a few things and then add a couple of other things (intentionally vague) before I can declare that it is done structurally. Oh and by structurally I mean that the shell of the map is done; such as room dimensions and things like that. Not that the map is done, no just the first stage of many.

I also completed the last section of the Black Mesa Outer A map. I have decided that this map is going to be parted up because I am sure that it will be too big for the mod limits in Hammer to compile (like the C25 Mall). So I will be breaking into three stages: the entrance, the mine shaft(s), and then the actual Black Mesa compound exterior.

Here are some screen shots: 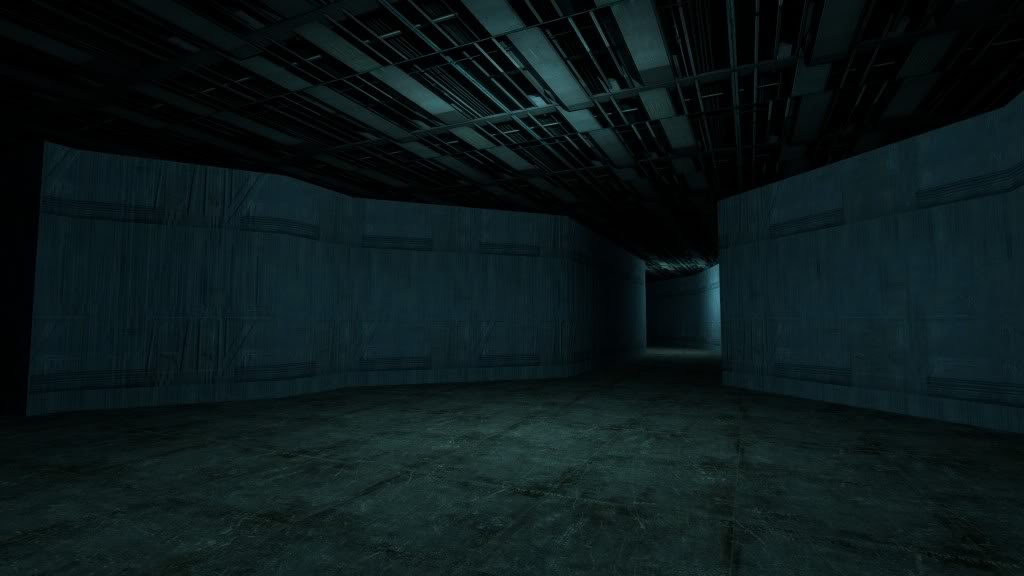 Here is a continuity shot of an area I showed last week. It now extends via a hallway into the new area. The opposite section also does this as well. I will be adding some changes to this hallway, the curvy section from the last update, and the opposite hallway to this one to flesh it out a bit more. You will see this in the next update. 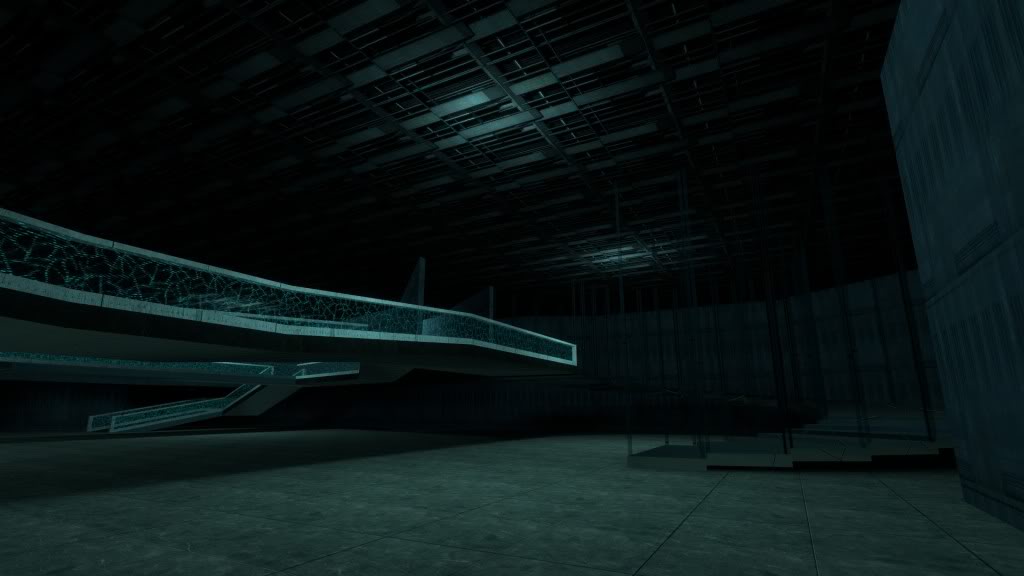 Here is one of the ways to get down into the new area, there are four total. This was made with the arch tool and the glass poles there are supposed to be supports for the stairs which would otherwise be floating in the air and defying physics. 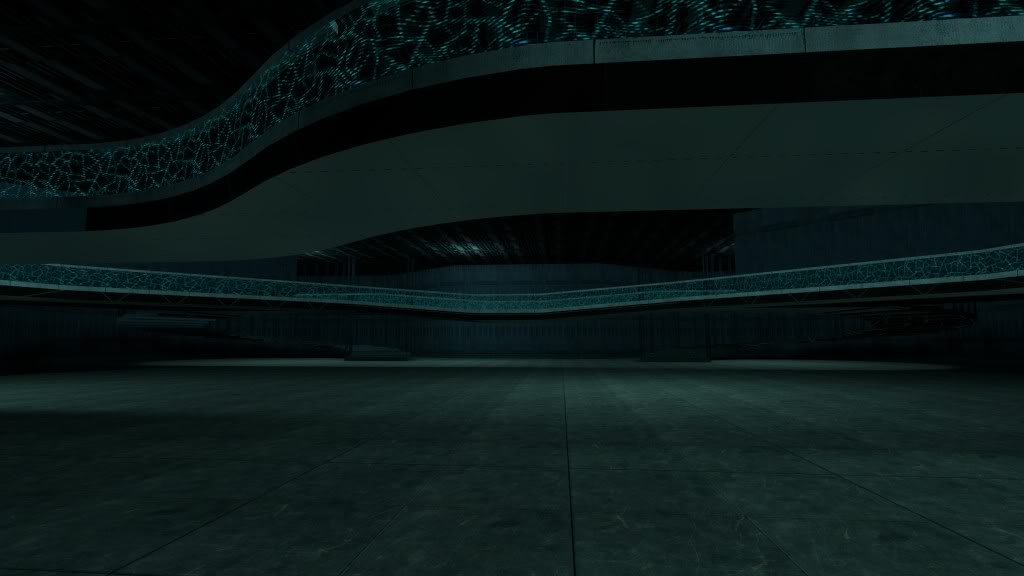 A look at the full span of the area from the second screen shot. This is about in the middle of the new area. I am still working a bit on the pathway you see at the top of the shot, for some reason some of the railing textures were deleted from the compiled version of the map. 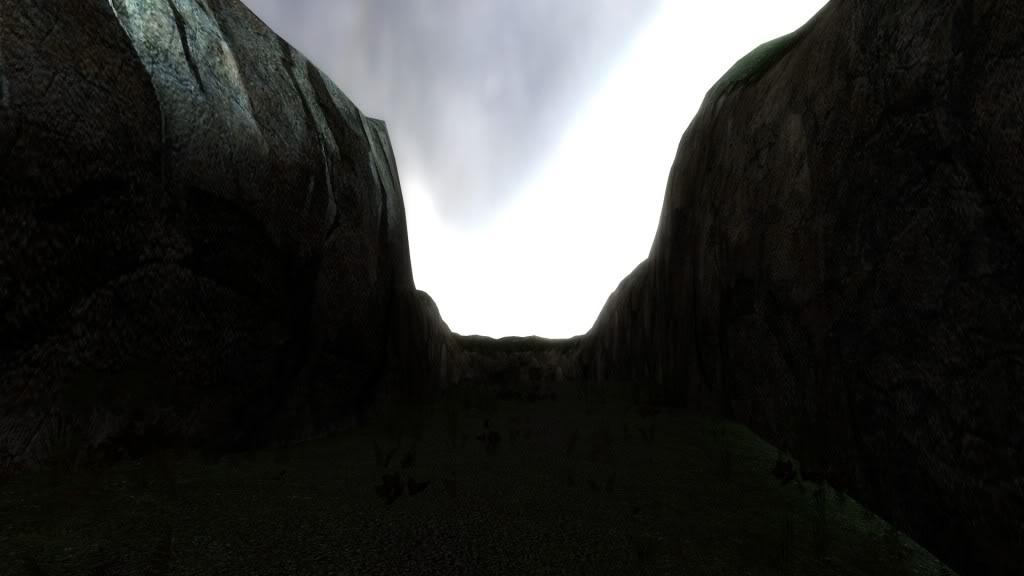 You may remember this section from the last update; it has changed quite a bit. I angled this downward and placed a flatish section at the end where the elevator building down into the mines will go. I am still not 100% finished with the displacements here and will be adding a bit more detail to them in later updates. 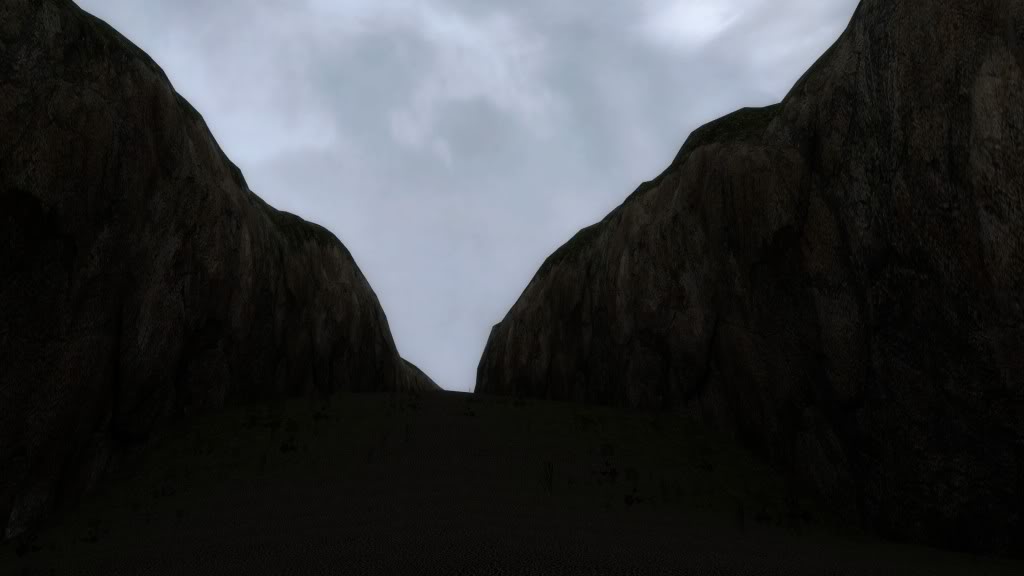 A shot from the end of that area looking back toward the upper section.

With that out of the way, I have been wanting for a very long time to tear into one of my favorite aspects of Episode 2's engine updates; cinematic physics. I had dabbled a bit here and there but I never fully got behind a motive for playing around with XSI and learning how to do c. physics. I decided that for this update I would get a rudimentary test demonstration video for this update and so here we are.

The models and animation was all done in XSI 2012 (Student Edition since it was free to University of Phoenix students).

This was supposed to be the highlight of the update. I was working on getting the overheating feature for White Matter Weapons working as a proof of concept but this is where that major snafu comes in. Upon beginning to work with the code and testing things I found that several key features we had implemented last year now are non-functioning.

Iron sights and the high explosives fragmentation grenades do not work at the moment. The HEFG problem is because I am trying to move them to a separate ammo type (if you recall the bug that caused HE nades to deplete the supply of regular frags and vise versa) and I am running into some issues, however the Iron sights refuse to work anymore for some reason.

Iron sights now crash the game no matter what I try. I spent a whole two weeks deleting our secondary test source code and placing the Iron sights code only into a freshly created Source folder around 12 times; 100% failure rate. I spent a lot of time on trying to fix both of these features and so that ate up a lot of development time.

The overheating function was also not working when logically it should have been. I thought it might have been tied to the reason why the other stuff stopped working but I never got around to trying it out by itself in fresh code due to time constraints. However I did manage to see if working in the debugging process so I know that once I can figure out how to get the values stable and displayed on the HUD properly that it will work.

That is all I have for this update. Hopefully we can figure out what is wrong with the code so we can fix those features and get the overheating working for the next one.

Whoa great job with the physics! I really liked the wall exploding and bricks flying away, but the house... God it will be fun to watch things explode that way!

The mapping is also getting really interesting, the type of architecture you use is quite different I must say, really cool looking.

LOL! but why does the house explode into ma-hoo-sive chunks? :S

I was too lazy to break it up into tiny pieces, :P, but no it was just a test so I did not want to do anything too fancy.

okay well i look forward to seeing your finished project :)

It's good to see your still making good progress Geowil. Surely you can find an experienced someone to lend you a hand with that problem code(ing).