After nearly one and a half year of work, the Arctic Warfare mod has finally been released.
The mod will cover up your battlefield in snow and throw you in harsh environments.
But check out the trailer first:

Rocky Mountains is a large-scaled map taking place in Canada. Specialized Russian forces are battling against the Canadian Army, trying to get control over a bunker. It contains important coordinates, that both sides need to get as fast as possible. 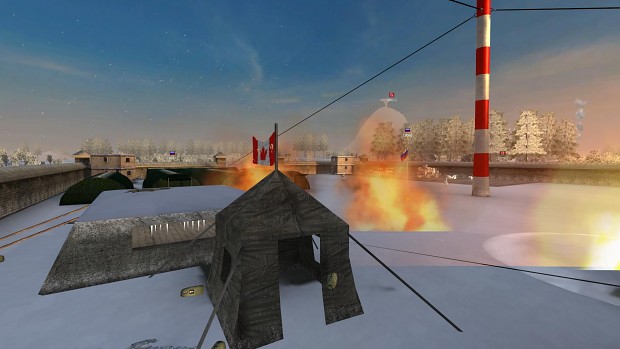 The Canadians are starting on a small plateau, that caps them of from the rest of the battlefield.
It's important for them to get control over a control point as soon as possible, otherwise they'll lose the match quickly. 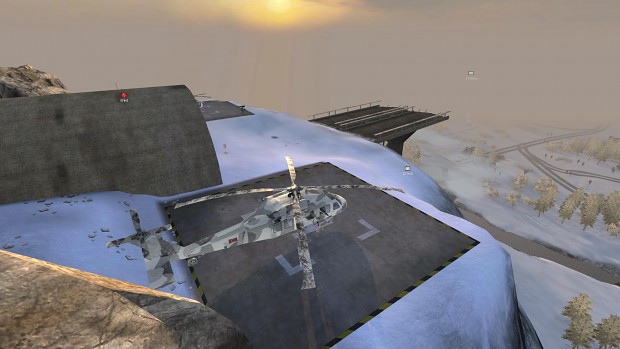 16: Close quarter battle over the bunker
32: A medium sized fight, that promises many battle through it's special shape.
64: Large-sized warfare on the complete map

Jeeps aren't a option for the arctic environments, so the armies decided to use snowmobiles as a quick vehicle. It can carry 2 soldiers, while the rear passenger is able to shoot.

Yes, inspired through Battlefield 3, we also built in some suppression fire, but only for MG's
It will blur the screen of your enemies, forcing them to run to cover if they want to have a clear vision.

Due to the small size of this mod, we won't have a multiplayer server running 24/7.
But we'll make a event every one or two weeks to get some players together and have fun.
Some info on the first event will follow soon

The mod should be very bug-free, but as this is my first real mod, it may happen, that there are still a few bugs. If this is the case, I'll patch them as soon as possible. It would also help me very much if you could leave some critics and/or reviews. Thank you!

If you want to run a server, you can also just download the

I want this mod, to be my valentine

Good morning.
Can you plz tell me how to instal the mod? Just follow the steps?
Thank you.
P.S.: Real nice to have a mod for such a wonderful game !!!

Yep, just follow the installation steps, and it should work without any problems :)

Looks quite good. Will you include the tracked hmmwv any time soon?

They said its impossible, but I still believe it can be done...

What is the music of the trailer ? It's not an original battlefield theme am I right ?

Holy ****.
Make yur mod less ******* hard to play.
The canadian team's vehicles are wayyyyyy over powered.
I didnt enjoy playing at all.

******* tanks took out mai tank with one god damned hit, and it took me 7 hits to take out their tanks in mai tank.
******* way too hard to play.
You must have gotten the damage numbers in the scripts unbalanced as **** somehow.

All I did was get angry at the ******* thing.
I dont play battlefield 2 singleplayer to get angry, I play it to have fun and get away frum getting angry.
Everything else is rlly great and all, but I'm nawt gonna ******* touch this mod until this **** gets fixed.

Dude, get your language fixed!

Expect from the M16 and the Snowmobile, every gameplay aspect remained the same as in the normal Bf2.

I don't know why your gameplay is so messed up. Did you play Bf2 before?

That's really strange. Sorry that you can't enjoy the mod :/

I did enjoy it, it was just rlly hard.

It's still a great mod and all but I just rlly did nawt have fun playing it foar the first tiem.

I luv how it's canada vs russia.
That's so original and epic. xD