Pariah's Guild (www.pariahs-guild.com) is a video games blog and a proud supporter of the PC modding and game making community. Who knows? Maybe I will interview you about your mod!

It's Been a while

it's been a while

Sorry guys for the lack of posts lately. I've been very busy this summer. First off my sister is going to college, then I'm trying to get myself ready to apply to college as well. Anyway, just to keep you guys updated, I interviewed the Naruto: Naiteki Kensei team about their upcoming Naruto themed mod. To read the article, visit here. Believe it!

Yesterday, E3 kicked off with Microsoft's press conference. Here's what was revealed at the event. 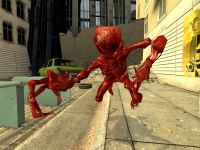 Noobkiller here again, and today I'm going to download another mod called Modular Combat. What's unique about the mod is that it's an action rpg for Half Life 2. It's about time! I was getting tired of playing nothing but shooter mods on Half Life 2 (not really, but you get my jest). Although I have to post new articles for Pariah's Guild, I still can find time in my busy schedule to play it. Noobkiller, signing off.

You know why I'm excited now?! Because Orion, a Half Life 2 multiplayer mod, release date finally been announced! It should come out August of this year! FTW!

For those who don't know, Orion is a Half Life 2 multiplayer tactical first-person shooter type total conversion based on VALVe's Source engine, powering games such as Half-Life 2 and Team Fortress 2. According to the modder, the game will feature

I even remembered doing an interview with the modder about the mod.

You can finally see why I'm excited. Only 2 months to go!

Has anyone downloaded the Spore Content Creator yet? Well I did. Thus far, I really love it. I was amazed seeing the limitlessness of the various looks of your creatures. I even made this Youtube video for my blog, Pariah's Guild showing some of the features of the demo.

Hi! My name is Noobkiller, admin of Pariah's Guild. Anyway, this is the first time using this blogging system in Moddb.com, but I pretty sure I can get use to it. Anyway, I'll use this to promote anything in PC modding community or video gaming industry that caught my interest lately. Anyway, I hope my experience with blogging is transfered here. Noobkiller signing off.