only add me if, you can tell me were in the world New Zealand is on a map, if not to bad =P, xfire account: KiwiWarrior 2010, Steam: KiwiWarrior: New avatar its the good night Kiwi a very famous T.V. Show way back when 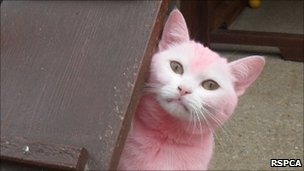 A woman who dyed her cat pink with food colouring will have her pet returned to her.However, the RSPCA said Natasha Gregory, 22, from Swindon, would also be informed of the potential hazards of dyeing cats.The cat, called oi! Kitty, was reportedly seen being thrown over the garden fence of a man on 18 September, who called RSPCA officers.An RSPCA spokeswoman at the time criticised it as a "sick prank".The organisation's officers washed the two-year-old cat, but its colour only faded slightly.'No offence'Following widespread media coverage, Miss Gregory, who has pink hair and says she "loves" the colour, contacted the RSPCA and asked them to return the animal.She told the BBC: "I love my cat - that cat is fed better than most people. I wanted people to know she wasn't harmed at all.

"I wont be doing it again - I was so shocked to see my cat on the news. I thought I'd never see her again."An RSPCA spokeswoman said the organisation would visit Miss Gregory to give her advice on animal care.She added: "Following the visit, as no offence has been committed and as a vet has confirmed the cat is in good health, she will be returned to her owner.

They always bleech animals and thats ok, but dying them isnt... : |

p.s. did you see the owner’s hair the cat looks fine compared to the owner