Hello, Welcome to my humble profile. My name is Daniel and I was born year before the Chernobyl dissaster, thank you very much =D. So enjoy yer stay and don't mess things up too much here... 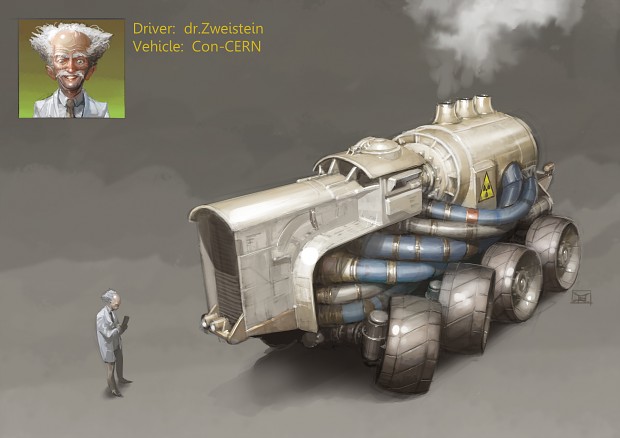 I hope you win broski, bcs this is awesome ;d great work!

Thats wht i want to have on my backyard, lol!

"Zweistein". Lol. Looks like I'm not the only one who thought of this joke :) (Although it's a pretty obvious one)

yea =D childish even... but it works

This racing machine is powered by small nuclear reactor constructed by nuclear physicist Dr.Zweistein, who is as unstable as the heavy core of his unussual power supply. But he is so far the only one who has the stones, as his last name suggests, to drive it. This vehicle is designed to run forever as submarines and other NP machinery, unless ofcourse wasted,in which case, shelter or escape far away may be required to survive if whitnesing sutch event. Nuclear core overload will very propably cause rather local, but still pretty mighty nuclear blast and it is not advised to linger at ground zero, when that heappens. Other than that, this technology of tomorrow packs a punch of pure energy, or perhaps clean energy ?
Eight wheels, provide reliable support as well as manuverbility, for this slightly heavier pice of machinery that was never really meant to be used as automobile propelent. It picks up pace slowly, but it looses it in same fascion, which is postive thing, if faced by opponent unwiling to remove him self from the path to victory. Due to this unstopable nature at it's glowing performance, dr.Zweistein named it:Con-CERN as tribute to hydron collider CERN.

Shit is about to get scienscy.