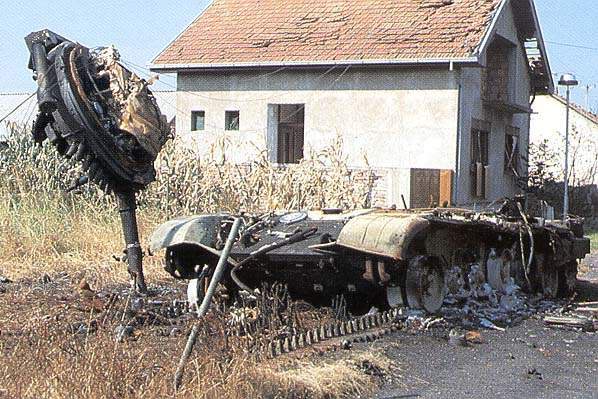 I think the turret was just blown high enough into the air to come down and land with the barrel facing down. The aftermath was captured here in the photo. Still incredibly lucky that it landed that way.

M84 is reworked T72 and T72 have bad ammo storage for autoloader in the bottom of turret ring google it for better picture and when tank get hit all ammo explode and turret fly off.From there is T72 infamous name "Jack in the box". But that is still better death then been live cook in transmission fluid.

Well at least it was considerate enough to provide it's own headstone... @_@

Battle of Vukovar was fought from August to November of 1991 and was but one chapter in the Croatian War of Independence (1991-1995).

As part of the 87-day siege of Vukovar, a large column of M-84s and armored personnel carriers are said to have barreled into the town, ready to flatten all that lay in their path. However, the armored vehicles of the Serb-controlled Yugoslav People's Army were defeated, and the road on which the vehicles lay stricken became known as groblje tenkova, or “graveyard of tanks”. Around 400 - 600 tanks and APC were destroyed in and around Vukovar.
Anti tank weapons used by Croats were M79 Osa, M80 Zolja, RPG 7 and other (including AT land mines).
Destroyed tanks on pictures are Yugoslav M-84, T-55 and T-34/85 (yes YPA/JNA still used it in 1991., mostly for infantry support).

The battle lasted for 87-days. More info on the battle: En.wikipedia.org

This pictures I uploaded are not here to bring hatred, but to show the amazing courage of Croatian defenders that were outnumbered and had to face one big war machine.
It also show how tanks can end when they go to deep in town without a proper strategy or infantry support.