We are a group who is against war and everykind of it. Feel free to join this group to show the world how important it is.

What is Zionism? Judaism versus Zionism: how to avoid confusing JUDAISM with ZIONISM.

Something for you guys.

It's why & how to avoid confusing JUDAISM with ZIONISM, taken from the site:
Nkusa.org

Judaism believes in One God who revealed the Torah. It affirms Divine Providence and, accordingly, views Jewish exile as a punishment for sin. Redemption may be achieved solely through prayer and penance. Judaism calls upon all Jews to obey the Torah in its entirety including the commandment to be patriotic citizens.

Zionism rejects the Creator, His Revelation and reward and punishment. Among its fruits are the persecution of the Palestinian people and the spiritual and physical endangering of the Jewish people. It encourages treasonous, dual loyalty among unsuspecting Jews throughout the world. At its root Zionism sees reality as barren and desacralized. It is the antithesis of Torah Judaism.

There is a vile lie, which stalks the Jewish people across the globe. It is a lie so heinous, so far from the truth, that it can only gain popularity due to the complicity of powerful forces in the "mainstream" media and educational establishment.

It is a lie which has brought many innocent people untold suffering and if unchecked has the potential to create extraordinary tragedy in the future.
It is the lie that declares that Judaism and Zionism are identical.

Nothing could be further from the truth. 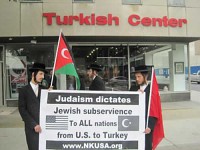 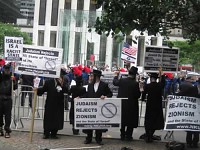 Zionism has for over a century denied Sinaitic revelation. It believes that Jewish exile can be ended by military aggression.

Zionism has spent the past century strategically dispossessing the Palestinian people. It has ignored their just claims and subjected them to persecution, torture and death.

Torah Jews the world over are shocked and pained at this short-lived dogma of irreligiosity and cruelty. Thousands of Torah scholars and saints have condemned this movement from its inception. They knew that the pre-existing good relationship between Jews and Muslims in the Holy Land was bound to suffer as Zionism advanced.

The so-called "State of Israel" stands rejected on religious grounds by the Torah. Its monstrous insensitivity to the laws of basic decency and fairness appall all men be they Jewish or not.

We of Neturei Karta have been in the forefront of the battle against Zionism for over a century. 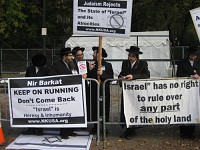 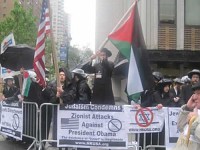 Our presence here is to refute the base lie that the evil, which is Zionism, in some way represents the Jewish people.

The reverse is true.

We are saddened day in and day out at the terrible toll of death emanating from the Holy Land. Not one of them would have occurred if Zionism had not unleashed its evil energies upon the world.

As Jews we are called upon to live in peace and harmony with all men. We are exhorted to be law abiding and patriotic citizens in all lands.

We condemn the current Zionist atrocities in the Holy Land. We yearn for peace based upon mutual respect. We are convinced that this proposed mutual respect is doomed to fail as long as the Israeli state exists. We welcome its abolition in a peaceful manner.

May we be worthy of true redemption when all men will join in brotherhood in His worship.

Institutionalized religion is all the same, it destroys lives under the guise of hope. But my opinion is bias as i can only see the problems it causes maybe one day ill see change, i can only hope.

All religions are somehow biased, maybe one day there will be only one faith, one faith accepted completely by one's own choice instead of compulsion or indoctrination.

Most parents indoctrinate their children. Even atheist parents.

Ok,now this is just nation-bashing
I've seen Pakistan bashed,im not gonna let som1 else bash Israel and give it the same fate

To be a nation, a nation must largely consist of people of the same close ancenstors. So sorry. Jewry (THE NATION you should be talking about) has a bit DIFFERENT view about Israel.

I reject this statement

So I'll decide about the FATE of your Pakistan. I have right to!

ONLY JEWRY has the right to decide about ISRAEL!!! Not devils who sponsored Israel and Zionist movenemts, e.g. Rockefellers.

Agreed tht rejection without proper explaination cripples your credibilty. I think he's more concerned with trivial matters rather than the 'bigger picture', nice to see some sense.

lol
this discussion is srs business?

what to u maen by bashed ? pakistan is not bashed , just in a hard time cuz of its government

i meant like universally bashed
not at a single point or anything like that,look around the net and you'll see what i mean
Regardless Israel is a state,it always has been a land rightfully given to the Beni Israel and they deserve the right to return and stay
I support zionism

Id kill all of u if i could, luckily,im not too radical like some other people i the world

In the actual world view :
The Zionism & Judaism are just looking like to the inseparable components of the Tetra Pak paper
Perhaps it is the ignorance or just the stubbornness of people

Zionism is the only reason the Jews still exist after thousands of years in exile.

"only hope"...yes,hope is a belief that we all must share-regardless of religion. this equalizes all of us as people. we all hope for better.keep hope alive my friends KJ

That is a false accusation towards Zionism. Zionism is the supporting of the Jewish people and their homeland Israel aka Zion.

I'm certainly not a person of faith or a supporter of nationalism. Zionism though is a gross merging of both, which takes two not-so-great ideas and brings into play one terrible one. Making Israel no better than some of the nearby states such as Saudi Arabia, which in my opinion is one of the most oppressive tyrannical theocratic governments still functioning to this day, which has the backing of the United States government no less.

Why can't a ethnicity have one country!? Is that to much to ask, Israel is the size of New Jersey, there are 21 other Arab nations, why can't the Jews have ONE homeland!?

ha its the same thing bro its the power of jews(Zionists) to look innocent.

I LOVE ISLAM Educational with 178 members