The military of the Loyalist Forces have been refomed into the main forces of the Second Fel Empire. Clones form the elitist forces of the Fel Empire while garrisons in systems and outposts are chosen from the local star cluster and trained in Imperial doctrine.

Military of the Second Fel Empire


The military of the Loyalist Forces have been refomed into the main forces of the Second Fel Empire. Clones form the elitist forces of the Fel Empire while garrisons in systems and outposts are chosen from the local star cluster and trained in Imperial doctrine. 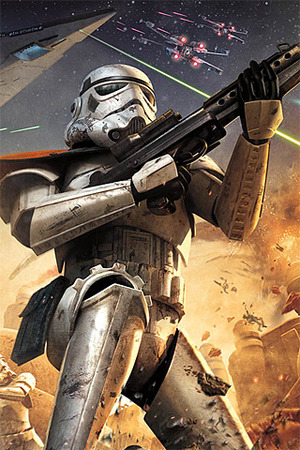 "The clone troopers, now proudly bearing the honorable rank of Imperial stormtroopers, have tackled the dangerous work of fighting our enemies on the front lines. Many have died in their devotion to the Empire. Imperial citizens would do well to remember their example." -Lord Cronus
Named after their brothers in amrs centuries ago These Clone Soldiers are absolutely loyal to their creator and Emperor, Lord Cronus. After his death however, they were ordered to serve his successor when the time came and the one chosen to lead the loyalist forces turned out to be Loreck Fel. Who have utilized this to the utmost and established the Second Fel Empire

The Special Ops Trooper are taken from the veterans and elites of the many Stormtroopers throughout the Empire. They are given extensive training and the best gear at the Empire's disposition, and are used to Infiltrate, Sabotage, Assassinate and simply cause Havoc among Enemy Lines. They are useally found in teams of 10 to 20, and use Blaster Rifles, Snipers, Vibro Swords/Knives, various traps and grenades and display a large amount of cunning. They are required to work independantly from other Imperial forces. 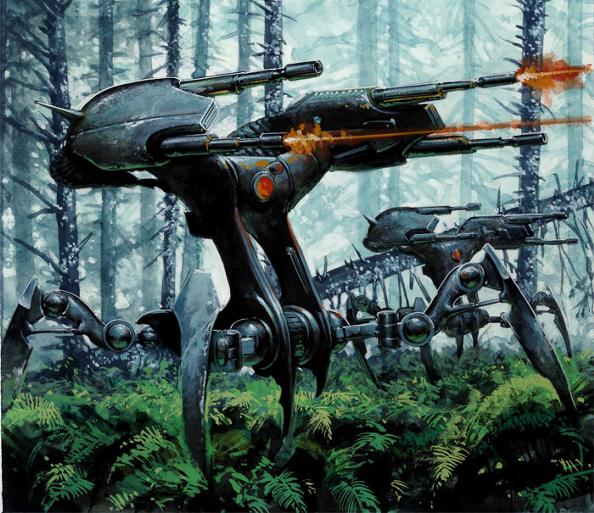 These droids were essentially a much more powerful version of the droideka, and they utilised four rapid-fire blaster cannons. it could target with a crimson photoreceptor or a composite radiation sensor. it also utilised a particle-energy shield, which was similar to the droideka's, though tougher. they were so dangerous that a single annihilator droid was powerful enough to take down three platoons of troopers on its own, and were rumoured to be able to decimate a dozen AT-TEs, striking fear into the hearts of our enemies. 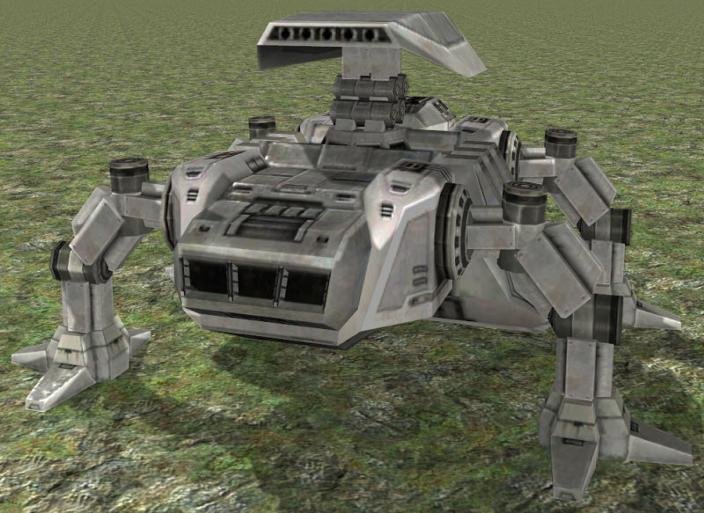 The AT-AA had four stubby legs and lizard-like locomotion, along with a low profile not seen in other Imperial walkers. On most models, the only weapon was a turreted flak pod, capable of firing several types of ordnance. Other versions could be equipped with one or three rocket-launching tubes. Initially the AT-AA had an inability to fire at ground targets. This was partially rectified with the addition of gun ports to allow the crew to fend off infantry attacks.Some variation had flak pods replaced with concussion missile launchers. The AT-AA also carried electronic countermeasure systems that could scramble missile guidance systems, thus lowering the risk of missile strikes.

The AT-AP was a highly successful way of transporting heavy artillery from place-to-place. Its main function was to serve as a mobile gun platform used for shelling enemy positions, rather than attacking troops or other vehicles. It featured highly-advanced targeting systems that gave it the nickname "sniper tank." The AT-AP was armed with a mass-driver cannon fixed to the front of the craft, a heavy blaster cannon mounted on a turret, and a medium laser cannon at the bottom of the main fuselage. 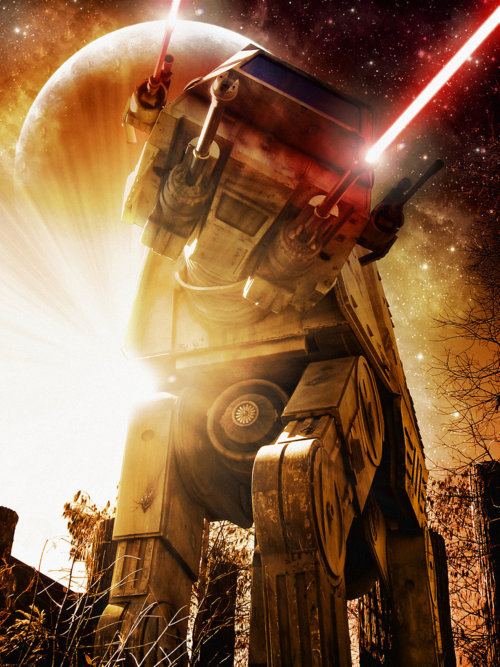 "We had the Battle of Gormen won, until the AT-ATs arrived. They came out of the fog and ripped apart the front lines. The locals ran in terror, but the experienced soldiers surrendered. We knew that you can't outrun an AT-AT."

The AT-AT walker was a behemoth of a war machine, standing at a height of 22.5 meters. The quadrupedal walker closely resembled ancient beasts of war, or even a giant legendary beast from the dark side of the Force. Designed for the dual purpose of crushing and demoralizing enemy forces, and also serving as a transport for Imperial troops and light vehicles, the AT-AT was among the most awesome vehicles in the Imperial Army inventory. Its intimidating and powerful presence often earned it the distinction of being the first vehicle into a combat zone.

The Chaab Assault Droid was based on the terror walker of the Galactic Empire. Using the same design, it has since been upgraded with modern technologies. In space, it is launched from Imperial ships and flies through the battlefield in search of a target. Once it has found a ship to attack, it attaches itself to it and begins to tear it apart. Once its has gotten inside a ship, it is very difficult to destroy, due to its shield generator and size. 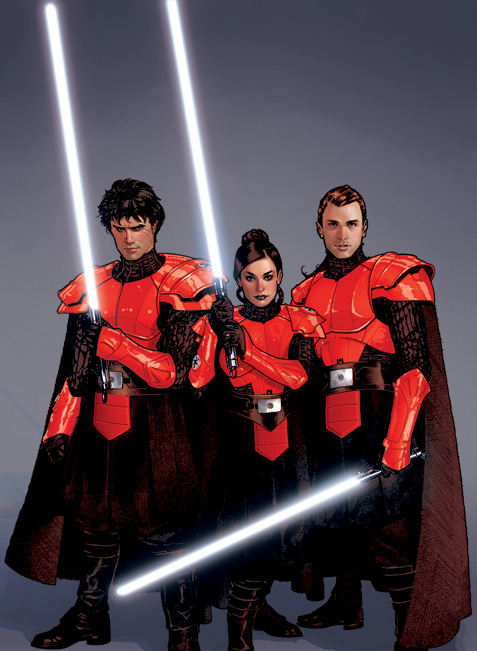 "We are Imperial Knights. We do our duty by the Emperor and by the Force - No matter the cost"
Imperial Knights are some of the best Warriors in the Galaxy, easily on par with Mandalorian Warriors and Jedi Knights. They are heavily armed and armoured Marauders, who use the Force to increase their combat abilities and crush the enemy using their superior duelling skills and amazing strength. They useally work in pairs, though some are sometimes seen to work in threes or fours.


The Imperial Navy was formed from the Galactic Alliance Navy, and as such was still under Naval Command. The Imperial Navy conducts itself by the Imperial Naval Code, a set of martial laws and regulations created to guide the massive military organization. With a crew made up of Clones, mutiny is non-existant and commanders of the individual vessels knows that they have absolute full authority, next only to the emperor himself. 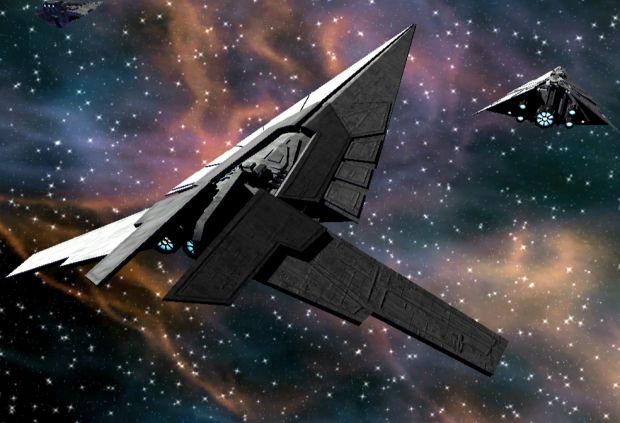 This vessel was designed for taking up the role as Flagship or as a Command ship within the Imperial Fleets. This ships is about 3 times the size of a Imperious-Class Star destroyer and is perfectly suitable for the task, being able to fend of most ships, even some Super Star Destroyers or ships equivalent in size, this ship is most formidable vessel. 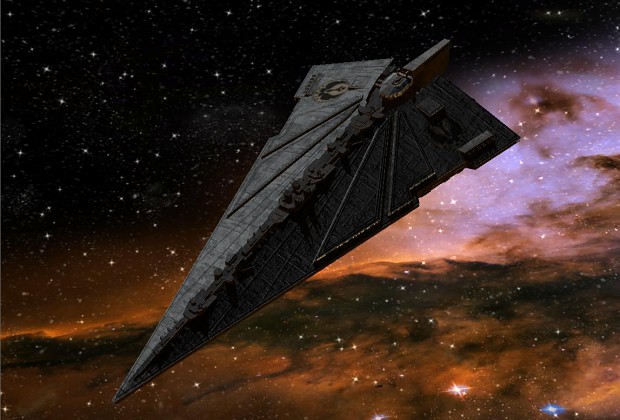 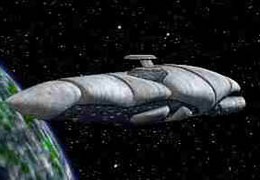 While a frigate in size, the 450-meter long Strike-class was capable of challenging larger cruisers with its surprisingly heavy load of firepower, strong shields, and high sublight speed. Armaments included 20 turbolaser cannons, 10 turbolaser batteries, ten ion cannons, and some point-defense weapons. The order of battle considered two Strike-class cruisers the equivalent of one Victory-class Star Destroyer.

A standard Imperial chute system provided for rapid deployment of TIEs and an onboard hangar allowed for minor repairs. The Escort carrier was the smallest vessel that could carry a full wing of starfighters (6 squadrons of up to 72 craft). The ship also carried six shuttles, and could carry four more for each fighter squadron removed. 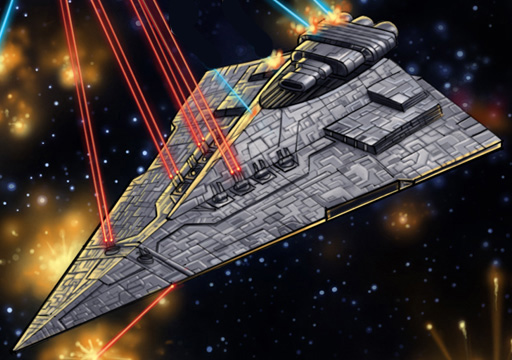 The Ardent-class frigate was about one-fourth the size of the Pellaeon-class Star Destroyers. They were designed for rapid responses and sacrificed both shielding and armor to increase their speed and weaponry. The class had a raised bridge section and three ion drives. They carried Nune-class Imperial shuttles. In overall appearance, the arrowhead-shaped vessels were reminiscent of the century-old Acclamator-class.

The Vigil-class corvette contained some weapons at the dorsal area of the ship, as well as a large dish. It was intended to be a heavy corvette for escort, reconnaissance, and utility duties of the Galactic Empire. Today a modern version still serve the Imperial Fleets and perform admirably against lighter vessels and starfighters. 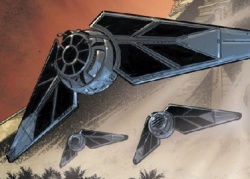 Considered a successor to the older TIE/In interceptor, the Predator-class fighter was still highly maneuverable and heavily armed, but unlike most previous TIEs, it was also equipped with hyperdrives and a deflector shield generated through its blade-shaped wings. As with the earlier Chiss Clawcraft, these wings could adjust to a variety of positions, aiding the starfighter's maneuverability. 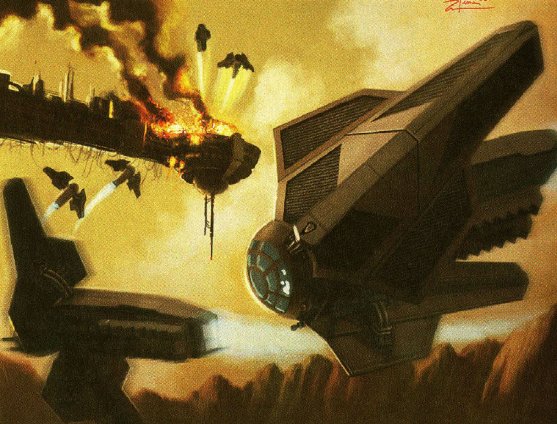 The Neutralizer-class fighter was a multi-purpose bomber, in use by Darth Krayt's Galactic Empire. Developed by Sienar Fleet Systems' engineers by adapting the designs of their Predator-class fighter, the Neutralizer was larger, bulkier, and less agile than the Predator. Featuring impressive shields for a fighter of its size, the ship was also nimble for a bomber and was capable of reaching speeds of 1,500 kilometers per hour in atmosphere. The bomber was also equipped with a Class 1.0 hyperdrive, and a navicomputer for interstellar travel.

*Outdated units have been upgraded to meet the requirements of the modern battlefield, others have proven so effective designs that even centuries later, they are still a force to be feared.*

How do you have Imperial knights? Unless you turned a bunch of sith to the lightside or had a secret apprentice while you were Cronus.

they are gonna be totally unrelated to either side.

I wanna become one :) but HH has been busy.

Imperial Knights are neither Jedi or Sith. What you say is correct, but they do belong to the Light side of the Force. That's what I meant.

Loreck Fel was stationed on a planet with a Jedi Commando team to guard the Jedi Holocrons while the war was on.

We have a few Imperial Knights, but not many.

And they are going to be light side aligned (in general)