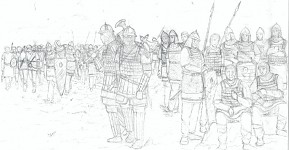 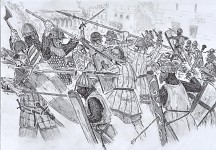 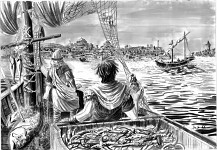 Some of you unaware passerby's might ask yourselves, "What are Byzantines?" The answer is as follows.

The Byzantine Empire was first born when the Roman throne split in two, the Byzantines placed their capital as Constantinople. Constantinople's position was perfect for sea trade causing the Empire's economy to thrive even through the fall of their western counterpart. The Byzantines had a very successful civilization, their armies being the best in the land, their architecture of unheard of quality, and their unsurpassed trade, all of the attributes made the Byzantines one of the most powerful empire's the world had ever known....for a time. Due to treachery, backstabbing, and internal strife the Empire was on the brink of collapse. If that wasn't enough, Sultan Mehmed II of Turkey was conquering Byzantine cities, and at last he set his eyes on Constantinople, but conquering it would be another matter, with it's thick walls, strong men, and extensive food stores the Turks had picked a difficult target. But the Byzantines were outnumbered and outgunned by the Turks newest weapons, cannons.
Mehmed said that he would spare the Emperor if he surrendered the city, Emperor Constantine XI responded, "To surrender the city is beyond my authority and anyone else who lives in it, for all of us, out of mutual decision, shall die out of free will without sparring our lives." The Byzantines held firm, but in the end the Turkish cannons broke through the defenses. "The city is lost and I am still alive." was the last recorded words of Constantine, before he ripped off his symbols of office and charged to his death with the last of his men. The Turks went through the city, murdering, looting, and burning anything in their path. The old were killed, (for they had little work left in them) and the women and children enslaved. All that is left of the Byzantines is the Orthodox Church.

What might you ask, is the purpose of this group? To keep the memory of their sacrifices alive.

That is what I ask of you passerby, remember the Byzantines.

Advice from an old rebel

Since this is the anniversary of the Fall of Constantinople, I have decided to start my Byzantines in Modern Day media with Fetih 1453. A Turkish made...

Passwords, war-cries, and prebattle tactics all used by Byzantines.

How the Byzantines peaceful nature was turned into a tactical asset. And how the Rus became allies of the Eastern Roman Empire.

A tale of the last true heir of a dying Empire, and a quote from LOTR.

How does one join?

we need an overhaul updated stand alone version of the roman empire for medieval 2 total war. :)

A bit of advice Constantine XI was not executed but was KIA. killed IN ACTION.

on the other hand the only 2 executed .one was Orhan Çelebi who was used as an agent spy to overthrow the Ottoman Sultan.

And Latin people were more dangerous to the Byzantines then turks because of the deadly hostility between Catholics and orthodox thats why they did not trust each others or western countries.

Some other Reasons behind the fall of Byzantines is the gateway for the barbarians (Franks etc) to the holy land.

Wow a group for lovers of Byzantium!
One of my favourite empires of all time and one the most beautiful fallen civilizations that truly upheld traditional western values. I have nothing against the turks, but I wish the bizantines were still the nation that unified East and West with bonds of culture, honour, dignity and civilization.
We should have helped them, we should not have let our brothers fall!

Many thanks for keeping in memory the empire of our lives and its heroes.

Greetings, may I join the glorious Basileia Rhomaion?

I would like to join this group. Basileia ton Rhomaion is my favorite civilization.