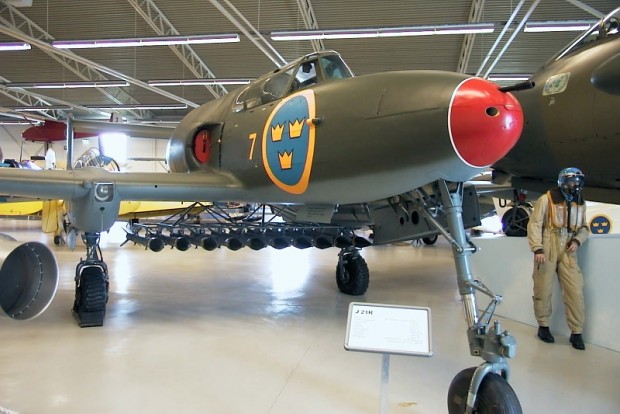 well, that's some firepower its got there

The SAAB 21 was a Swedish fighter/attack aircraft from Saab that first took to the air in 1943. It was described as a very efficient weapons platform. It was designed as a twin boom pusher configuration, where the propeller is mounted in the rear of the fuselage, pushing the aircraft forward.

The Saab 21R was a Swedish twin-boom fighter/attack aircraft made by Saab. It was a jet-powered development of the piston-engined Saab 21 which along with the Russian Yakovlev Yak-15 was one of the only two jet fighters successfully converted from a piston-powered aircraft to enter production.
As a fighter, its service designation in the Swedish Air Force was J 21R, and saw service in the late 1940s.