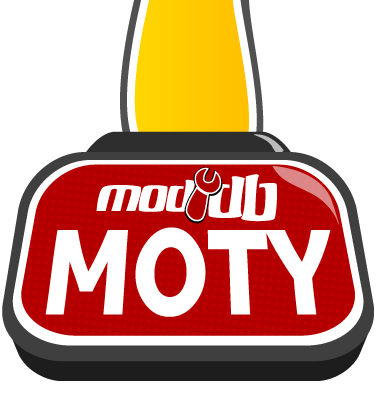 Each year, beginning around November / December the Mod DB Mod of the Year awards are kicked off. For two months voting is open to everyone, and every mod is eligible (released or not) with the ultimate goal being the unearthing of this years best mod, as decided by you.

During this time, all mod profiles show a big "vote now" button. Members & guests recognise the mods they like by simply pressing the button (note. guests are limited to one vote). After 2 months of voting the competition is locked down and results tallied. The winning mods will be notified and shortly hereafter the results will be shared.

What are the winning categories?

Update: The MOTY results are here - check them out! Compared to previous years, it felt a little slow due to a slew of new games been introduced with new SDK's to learn. As mod teams made the switch to the next generation engines, so the learning process re-began and it took quite some time before


Scott wrote: Compared to previous years, it felt a little slow due to a slew of new games been introduced with new SDK's to learn. As mod teams made the switch to the next generation engines, so the learning process re-began and it took quite some time before we started to see what the new breed of mods were capable of doing. We are still a fair way off maximizing these engines potential so there are certainly exciting times ahead!


Aaron wrote: As for me Mods of 2005 just got better and better. I would of never imagined a mod of Garry's type ever, or Plan of Attack. If any of you old schoolers out there remember Counter-Strike was not that good on it's own first release. Modding isn't a bunch of kids any longer it's teams of adults who live in the same area and work in a small room and in some cases it's a College Course Credit. We even have modders who do it just for the thrill and the accomplishment to say they made something crazy. For example, The Hot Coffee mod. His goal was to make it fun and silly for the mod leaders friends to play. The end result was history. The media and the politicians started to look at modding in a new light. On a good note gaming publishers looked at mods more and more for inspiration and to hire team members in 2005 then any other year. Many of the mods in the list were aiming for a late 2005 release so expect a awesome 2006 and have fun!


That's right, folks! We are hosting the modDB.com Mod Awards show again, this time hosted by BlueWolf72. Sponsored with Shaunzy the owner of EGLN. The mIRC info: #EGLN is the channel to be in!

INtense, the creator of modDB.com, will be on air with us inviting all of you to listen in for a good time! Mod winners have been contacted with the information on how to join the show. If they don't join they miss out. Thanks to HTGN all the mods that show up for the event might win prizes.

Once on the show you will find out what area you won in and *PRIZES* just might show up. No promises on the prizes but I am trying! #EGLN is on gamesurge and to tune in just click this Live Radio Link

And about the same time in Switzerland. Too much time to wait!

I hope they record the whole thing and offer it for download after, especially for Australian gamers.

btw: i cant connect to gamesurge :(

Here we go! May the awards begin!

Woohoo! Sounds like it will be a good show.

I'll be tuning in hopefully. By my calculations its 6:00pm GMT, so I should be ok.

I predict (or I'd like) Hollow Moon, KZMod (Kreedz Climbing) and perhaps All Out Fairy Tale to get mentions in the most innovative department. As far as "Upcoming mods" I'd go for (in no particular order) Kreedz Climbing, Project: Hull Breach, Black Mesa, Neotokyo and Fortress Forever. There are others that spring to mind, but they are further off from a release.

Allways when i tried vote something it said that direct link voteing is disallowed, vote via mods profile. So if the mod which i tried vote dosent win anything this year. Its Moddb Fault ;P

Rofl, indeed the music is awful.

So its like now? just music here.. and whats the address to that irc-server, if its what i recon, it doesn work..

#egln on the Gamesurge Network - they had a net split right before 1:00pm so that might be why you can't get on.

Enough with the damn music T_T

If this horrible music continues, I'm just going to wait for the results on the front page...

Wow..they should have done research for each mod that they planned on talking about.

"Apocalypse Weekend"...that's an official add-on for Postal 2...all it does is adding a few new levels and weapons. How the hell could you relate this to Apocalypse Now?

@Chunky.The. Tree.: I don't think they can tell the presenters who wins before, BUT it'd be nice to give them the results about 15 minutes before for them to have some discussion or at least get clued up.

@nfinity - actually, they were talking about the new Postal 2 mod "7 day weekend" - but you're still right...

I have to say this. "Unorganised!". Im not the only one. Chatting with some Mod Devlopers on MSN who I wont mention but this is very unorgainsed. Some of the staff havnt played the mods.

Oh my bad...
the audio quality's too bad to make out everything they're saying :)
But yeah...unorganized as hell. If you're doing a Mod-Awards Show you should at least know what you're gonna be talking about...
...at least he stopped saying "cool cool" (at least I think so...)

Good show, I enyoed it !!
Now people don´t forget about the mods not mentioned, there might be just gem sitting around on this site that could be your very personal #1 ;)
Congratulations to all winners!!
And big general cheer to EVERY modder out there, mods are simply cool, so thanks everyone who sacrifices his/her time to give us all a new gaming experience !!

It was a nice show, but I really would like to see a top 100 of the mod votes (with no distinctions or descriptions), it would not be so hard to do!

Anyone disappointed with the lack of coverage for small but deserving mods on different engines? Take a look at some of the ideas and suggestions I've proposed here. If you feel the same way and like the ideas, don't hesitate to say so.

As far as the show's concerned, I'd prefer to see those presenting and being interviewed on the show to collectively have played mods across a range of engines. I don't play mods on all engines, but there are definitely ModDB members who do play mods for WarCraft 3, Diablo, Morrowind, and so on. For each award there should be someone who has knowledge of what sort of accomplishment the mod has made, whether it's someone who mods for the same engine and can appreciate the technical achievement or someone who's most probably played the game. There was not really anything insightful from the interviewees until the very end of the show when some actual opinion was shared.

For the awards I'd like to see some of what past years have given (best visuals, audio, etc.) and more probing 'Editor's Choice' awards. I can fully accept that half of the awards will be a popularity contest (and there's nothing wrong with communities getting behind their mods to give something back to the teams that brought them enjoyable gaming), but I'd also hope the other half would have some critical opinion and really pick out the truly ground-breaking mods (and those to come). As the Games Industry is set to overtake the Film Industry I think that we should be looking at awards like the Oscars (or preferably a less-politically charged process) that span the areas of production that go into the ever-more-professional development of the modification. It's sad to say that categories like Coding, Audio and originality didn't figure in the awards (and that " Story" wasn't taken seriously) while the award for 'Most Hyped' effectively rewarded the best PR/avertising campaign!!! Maybe in the future we could have a set of award categories in the Golden Spanner forum for fans to nominate their mods.

I agree about the show being pretty disorganized and I was on the thing.

A lot of the problems came from how rushed everything was at the last minute to get the Mod of the Year Awards out on time. To be perfectly honest, I never even knew we were doing an "Editors Choice Awards" section until almost a day or two ago, otherwise I would have lobbied for us to wait and award them after the fact when we'd have had more time to set them up right. Most of the possible candidates for the Editor's Choice Awards were still being argued out when someone (possibly INtense! himself) went and added a bunch of awards. No clue as to who wrote up any of those one's that are on there, but it wasn't much of a committee action.

Had we more time, most likely we would have assigned staff members to play each of the mods that won, so they could all be on hand to discuss the games when we went on the air with the show. But most of the work for the MOTY article that wasn't just tallying up the votes and adding pictures happened in this past week and there just wasn't enough time for it. Chop did a great job of adding perspective on any of the mods that got brought up, while I sat in the background and mostly fidgeted until there was something tangible I could bite into for a while. Since my connection dropped out on me near the end, no clue as to whether or not Scott showed up in the end. But just having two members of the entire ModDB Staff on hand was pretty pathetic, especially since the whole focus of the show was on our bloody awards.

These are excuses and lame ones at that, but if it feels rushed, well, it was. No point in lying about it.

awwww man i missed it how was it?