Wolfram is a modern remake of Wolfenstein 3D, game created by id Software in 1992. It features modern graphics including per-pixel lighting and shadows, ragdoll physics, real 3D environment, gameplay enchancements, achievement system and many other original innovations. Plunge into a total flashback!

Wolfram, the modern Wolfenstein 3D remake, is finally released after more than four months of hard development. Thank you for patient waiting and watching our game. The game turned out no so ideal as we planned, but we did our best, and hope you like it.


There are three versions of Wolfram available: European, US and Russian. European version has been cut a little bit and does not include any Nazi symbols. The language is English. It is intended for those people who can be insulted by such the inappropriate content, or whose country's laws forbid it. US version is the full English version of the game with Nazi symbols, just like the original Wolfenstein 3D. And the last, Russian version, is also the full version, but it's language is Russian.

Minimal system requirements are: 1 GHz CPU, 512 Mb RAM, video card with 64 Mb onboard video memory and latest drivers (integrated video is not recommended). However, for the best game performance, a modern multi-core CPU and a powerful NVIDIA or AMD graphics card are recommended. You also need 200 Mb of uncompressed hard drive space to install the game (not including space for screenshots and savegame files).


We are very interested in and grateful for any user reviews, or general comments about Wolfram. You may post them, along with bug reports (hope there will be few) or your personal achievements, or whatever, at the profile's page. Thanks for downloading and playing the game! 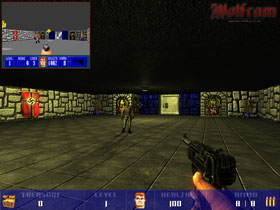 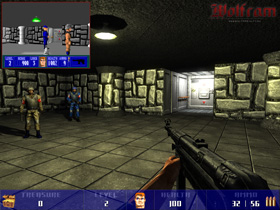 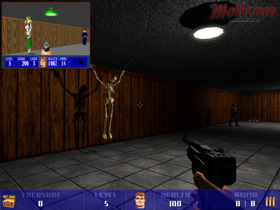 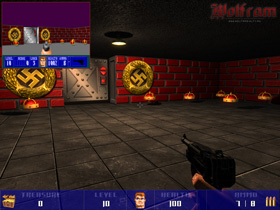 Damn. This is a lot of fun! You did a wonderful job upgrading the graphics and animations. I love how you kept a lot of the wall textures the same, especially the blue ones.

Thank you! However the author of most of diffuse level textures is Freelanzer, he made them for some other remake and gave us permission to use in Wolfram.

Yeah, the "other" mod was "WolfTC for Doomsday"...abandoned.
I worked with FreeLanzer on that one, great guy :)

very well done, will there be a map editor/maker in the near future?

Yes, it is possible to release level editor, map compiler and stuff. There is already mod support, so additional episodes or custom level sets can be easily tied to the game.

Do i have to download the censored version because i'm from Germany?

I know we have this Law but it's rediculess.

You can see these symbols everywhere in movies, documentations, pictures, etc. even here in Germany.
Only in videogames you're not allowed to have them.
Mostly because the old guys still in charge don't wanna accept it as a form of art.

For me it seems far more dangerouse to cut or replace these symbols with something else and therefor disconnect the message from the context.

Some kind of denying the history.

Yes, that's right. But it's your own choice which version to play. :)

I thought it was the other way around? It's not that you can't play the game, but the game can't get released in Germany. Yet this is not a release, this is a free download. The power of indie games is in their freedom of censorship...

Am I wrong on this?

Is this based of the shareware or full version of Wolf3D?

It is a standalone indie game. It is not based on Wolf3D at all.

ah sweet.
will give a review when I have finished it

I think this is definitely a great release amongst other game remakes/updates such as Jedi Knight Enhanced for Jedi Knight and the High Resolution Pack for Duke Nukem 3D. Excellent job!

Anyone else's game crashing when you fire your gun a couple of times...?

If someone has a crash problem, please clarify whether you run the game on Win7 Ultimate 64-bit (or 32-bit), or not. It seems that the crash is tightly bound to the Windows version.

This Remake is AWESOME!!
make a Doom 1+2 Remake like this, and you are LEGEN...wait for it....DARY LEGENDARY!!!

Thank you! Yes, it would be interesting to remake Doom 1+2, but it will take much more time due to more advanced level design, and a lot of character/weapon modelling (we still lack modeller for such kind of job).

Thanks this is amazing! Is this completed? Will this game only support 10 levels of the original game or are more levels still coming?

Thanks! Yes, this is a complete game.
We won't remake the rest of Wolf3D levels because of two main reasons:
1) it is a huge amount of work (e.g. new enemies, and the levels themselves), and we have not enough free time for that;
2) only the first episode is shareware, others are paid, and it is completely illegal to release them for free, even in a remake.

I understand the reasons and thanks again, I'm having great fun unlocking all achievements and showcasing this remake to friends!

bitdefender says its a trojan virus :(

After playing for a while I noticed the game is way harder than Wolf3D, and that's mainly because enemies don't have hit animations! They keep shooting at you without pause, even if I shoot back and hit them, so there's almost no way of hitting an enemy without getting hit yourself. Is this being worked on or is this how it was supposed to be in Wolfram?

Well, yes, it is supposed to be. The game becomes extremely easy otherwise, since now you have free look, can jump and duck.

Thanks for clearing that up! Guess I'll just have to play better ;)

But jumping around and ducking doesn't affect their aim at all, you get shot just as much. And freelook makes it (in comparison) harder to aim. In fact all of these things make it harder to aim, and leave you just as open to being shot.

I downloaded the game earlier today! I've played for a couple hours and am currently on level 3! I've definitely spent a lot of time making sure I got 100% of enemies, secrets, and treasure!

I did the find the game to be very difficult but I've changed my strategy quite a bit and am doing much better. I had to give up on the hard difficulty setting because I couldn't even get past level 1.

I wanted to ask if your team has considering doing this for Wolfenstein 3D: The Spear of Destiny? I think a LOT of people would be interested in that! Not many people have played Spear of Destiny that I know of.

Do you have plans to continue working on this game or is this the finished product??? I would seriously have paid up to $15 or $20 for this! It's amazing! Wolfenstein is my all time favorite game series and this is the PERFECT upgrade/re-do for Wolfen3D!

Thanks for playing! This is a finished product, however mods or additional episodes can appear, since we already have mod support in the engine. And we cannot make a paid vesion unless id Software permits it (and i doubt it would).

Looks great, but same problem as others. Crashing on shooting guards. Windows 7 Professional, 64 bit. Wish I could play it, brings back memories. :)

Patch is ready and awaits for admin authorization. :)

I've been attempting to run it under various compatibility modes, Vista, XP etc but no go.

Thanks for your time in patching it. :)

Well, if your problem persists after the patch is applied, just send us a crash report (it's almost automatic). We've fixed a crash some people encountered, but there can be more. :)

So when is the patch ready?

Did they just replace the file and not change the date?
Or the patch file not approved yet?

Never mind, it doesn't seem to be linked to this page which I bookmarked.

Patch working great so far on my 64 bit win7 system. No crashes yet.

Thank you for waiting for the patch! :)

I love this remake, but how can i activate cheats in this game ?