Brawl or Bluff your way through the mini demo of Will Fight for Food!

Will Fight for Food is a Role Playing Brawler with impactful choice. Talk or fight your way through a variety of situations as you control Jared "Raptor" Dent in a futuristic city. Here's what you can expect from the game:

1. Detailed conversation system
Are you tired of "simplified" conversation options in RPGs? Do you want depth and challenge in conversations? If you answered yes, then WFF is for you. Jared's Body Language, Opinion and Tone can be customized in conversations according to a person's personality and situation.

2. Fast paced brawling action
If you are not the talking sort, fight the myriad of characters in the game instead! We can confirm that the cast of fightable characters include Italian hoteliers, power armored nerds, forest rangers, thugs dressed in animal suits, donut starved police - and many more! You cannot find this sort of quality action elsewhere.

3. A Plot with choice (and you can punch anyone in the neck)
Instead of NPCs wearing plot armor and unskippable cutscenes where cool stuff that you can't possibly do in game happens, Will Fight for Food allows you to pick a fight with anyone in the game. The consequences of your actions are yours to bear as you decide how Jared gets back on his feet in the city.

4. Mod support
We love ModDB, and the game features super easy customization of everything - new scenarios, fighting moves, story - the full package. It is our way of saying thanks :) 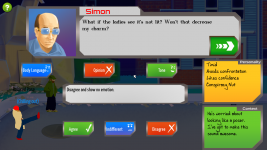 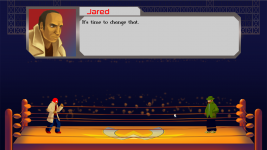 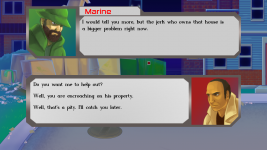 P.S. We will release a more hefty demo later, please track us to be notified when it is out!
P.P.S. Linux mini demo is coming soon released!
EDIT: The fix for the Marine out of bounds issue is uploaded!

You can kick Marine out of bounds.

The issue is now fixed and patch uploaded!

Pretty awesome, by letting individuals preview the game, you can find the issues through crowdsourcing

Yes, any feedback you give will definitely be applied in game - provided it's not "replace all people with walking mangoes" or something ;)

As for testing, I'm just one guy so I'm bound to miss a few things.