Another bunch of characters you can brawl or befriend (or both) in the game!

Hey everyone, i.e. the five people who read my posts - I love you guys/girls/sentient AIs!

Our awesome artist had some slight...issues with his plan of electrifying the entire world's oceans to destroy all aquatic life (which for the record, is pretty cool) and a complex series of events following failure of said plan means the game is delayed - again. Indie developer fails to meet deadline shocker!

Okay, okay, I know. But I'm pretty sure our run of bad luck will end this time, with the new release date being Friday the 13th, April 2012! I mean, what could go wrong?

That bit of unfortunate news aside, let's introduce a few more characters you'll meet in your adventures in Will Fight for Food.

Lily
She's the head forest ranger of Whateville, responsible for the maintenance of the forest area near the city. However, the protected status of the forest itself is in danger with the WFF looking for land to expand in. Oh, and if the situation wasn't bad enough, she and Jared have the strains of a past relationship to deal with. 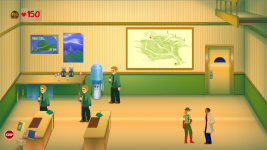 Marco
You know, running a food joint in a place like Whateville isn't easy. For starters, you have to keep up with the latest food trends from all over the world. Then you need to service all sorts of niche markets like the police while balancing the demands of the cool kids that need organic coffee or something. At least Marco's dress sense is impeccable, because his situation isn't. 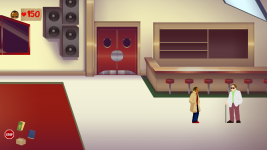 Peter "Captain Patriot" Jones
Patriot's CV is impressive - he broke into the WFF by winning their first ever amateur tournament, was the champion for a long time, and then used his charisma to contest and win in the local mayor elections. The only way to go is up for him, and you better not stand in his way. 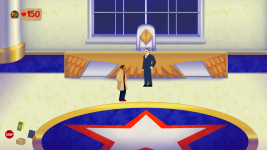 Lou
Unfortunately, when somebody wins, somebody must lose. After losing in the amateur tournament finals to Patriot, Lou's promising career failed to lift off. The weight of her family's louchador tradition meant she had to work as a food vendor while looking for her lucky break. But with Patriot as the mayor, that is about as hard a task as it gets. 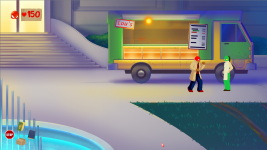 P.S. Here's a bit of music from the game for your listening purposes!

Things are getting intense! - Mod DB