Set during the American civil war, War of Rights aims to bring players into the midst of several famous battles. Gameplay focused on realism will enable players to fully engross themselves into the ferocious combat of the era. Featuring several regiments, players will quickly learn the benefits of fighting together. An organized and tactically clever chain of command will be needed in order to succeed. Players will be able to enlist as different ranks spanning from Private to General of the army, each with its own distinct role and play style. Utilizing CryENGINE 3's sheer amount of power, getting as many players online as possible and thereby ensuring massive battles will be one of the priorities throughout the development. 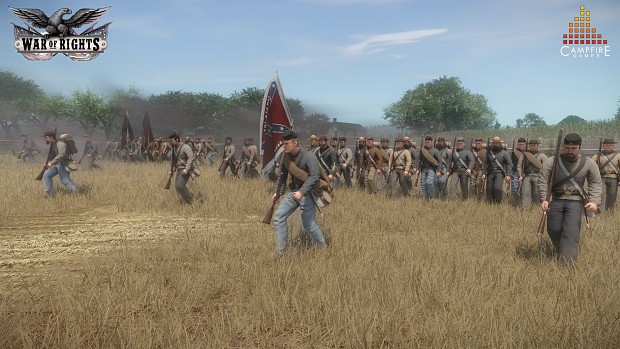 Please read our latest news update in regards to the current state of the game: Moddb.com

While the Confederates got heavily attacked at the Sunken Road, Brigadier General Wright's brigade got the order to send fresh reinforcements.
The 44th Alabama and the 3rd Georgia formed at Gen. Longstreet's headquarter at Piper Farm and dressed their battle lines. In addition, skirmishers were sent out infront of the main line to fight the enemy pickets.

It was during this advance, when soldiers of Wright's brigade saw General Longstreet himself, helping to shoot a 12lb Napoleon near the Apple Orchard.