Voyage to Farland is a tough-as-nails graphical roguelike game. What's a roguelike? It's a notoriously challenging dungeon crawler role playing game. This game is NOT a grindfest or a hack-n-slash game. It's turn-based and succeeding requires keen strategy and perseverance. But you're up to the task and you have what it takes to defeat the Spirit Witch and unlock the hardcore dungeon, The Path of No Return. If you make it to the end of THAT dungeon, a surprise is in store for you. Five themed dungeons. Tons of monster types with devious abilities. Voyage to Farland will keep you busy for months to come. Fun things you can do in Voyage to Farland: • get a pet robot you can level up • befriend an outcast monster that will help you fight • take on the challenge of the Strategy Dungeon • build weapon & shield enchantments and store gear in a warehouse

Thanks for voting and helping Voyage to Farland on it's quest to become the 2022 Indie of the Year. You are now in with a chance to score some free games. Help this game secure more votes by embedding the widget (or link) we have included below on your favorite sites.

Version 2.2.6 of Voyage to Farland (with new and improved Toy Robot)

Version 2.2.6 of the Mystery Dungeon style roguelike game, Voyage to Farland, is out today!
This update fixes some bugs with the Toy Robot assembly and leveling mechanism and adds other improvements. 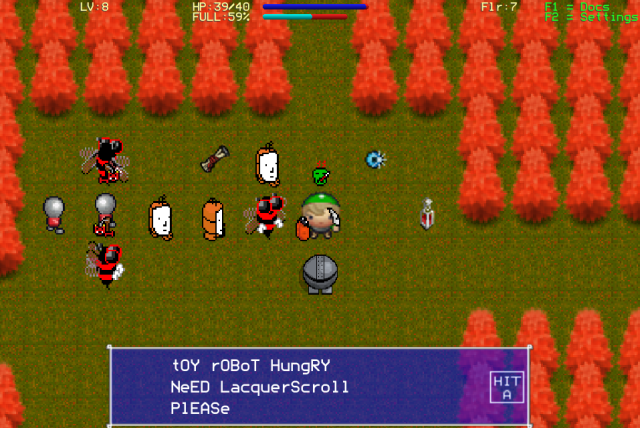 Don't be afraid to talk to the Toy Robot. It has its own unusual dialect as you can see, but if you befriend it, the Toy Robot will grow stronger and help you fight all the terrible monsters in the Bot Subplot dungeon and beyond.

Go to the Desura page, the developer blog or the forum to learn more about Voyage to Farland. See you in the dungeons!

Voyage to Farland 2.2.5 with Rescue Codes!

This release of Voyage to Farland introduces a cool new feature: Rescue Codes.

This release of Voyage to Farland brings fullscreen support to a wider range of PC displays.

Update 2.2 for the roguelike game Voyage to Farland adds full screen support and a larger view area to the game - 16x10 cells and 12x8 cells compared...

Version 2.1 of the Mystery Dungeon inspired roguelike, Voyage to Farland, has plenty of graphical and UI improvements.

Pleeeeeaaaaassseee patch in controller support or at least the ability to remap movement controlls. I like the game, but playing with a controller would make it a lot more enjoyable.

Yeah, I've wanted to add controller support for a while. Until I add support, try out something like JoyToKey - it would be interesting to hear if that works. It would also be helpful for people to spread the word about the game. I can never get the press or blogs to write about it. :(

Yet another Let's Play - this time by iJimTM. He gets the Toy Robot buddy to help him fight!

Heads up that I did a developer Let's Play series showing a rescue run:

Hey everybody! Just wanted to point out that there IS a try-before-you-buy option for Voyage to Farland.

Head to the website (link at top right of the Desura page here) and you'll find a demo version for both Windows and Linux. Now go vanquish some monsters!

I still find myself getting lost and conused at the very first river section. Maybe it's just me, but there's a river, a raft, and I can't do anything with either of them... I am confused and worried I'm missign something very important.

You can use the raft on the next floor. Try it, explore! Especially after reading a Lightscroll ;)

Also, if you're really generous in what you trade the girl with for the raft (something sweet but healthy), you might find a use for the raft there in the Thatched Hamlet!

Check YouTube for Let's Play videos for some more hints.

I like Shiren so this sounds awesome but after trying it out to my horror I discovered that you can't move with vim keys and as far as I could see there was no way to remap movement keys!
Also is there any way to get a android version except by purchasing through the google play store? I'm not really able to use their payment processor or at least figuring out how to do so is too troublesome.

Yeah, sorry about the lack of vim key support. I'll keep it in mind for a future update. But give the arrow keys another try. I'd say you can get used to them (with D for diagonal), but then again I've been testing the game for years, so I'm biased :)

The Google play payment system is pretty restrictive, I've heard. Can you use a prepaid debit for it? How about Desura - are you set up to use Paypal?

I can use paypal fine and already bought the desura version.

Why on earth would you be so married to the vim keys that you can't make the change to the arrow keys? Maybe it's because I've been a Windows person and not a Linux* person, but if Linux makes you so restrictive you can't get used to such a small change as the usage of movement keys... argh!

*I realize I may be making a leap here, but I still think it's a justified leap.

Twitter
Tags
Embed Buttons
Link to Voyage to Farland by selecting a button and using the embed code provided more...

We who are about to Die Roguelike