Unreal Tournament is the sucessor to the awesome game that was Unreal. Boosting the most advanced gaming engine when it was released, this game kicks some serious arse. Unreal Tournament's got it all without a doubt: ton's of amazing levels, kick-ass weapons, brain-melting modes of play, unbelievably deadly bots, and a slew of other features bound to have your happiness glands working overtime! I have not even mentioned the mod's either, and boy are they bountiful and bloody brilliant, with titles such as Strike Force. So give this game and spin, then crank up a few of it's mods and you will be wondering how you lived without this game!

NOTICE: Unreal Tournament v436 and Bonus Pack 1 are required. Advanced Model Support is included with the pack. If some characters don't appear in the bot roster, you have too many custom models. This pack contains 13 converted characters from the Playstation 2 version of Unreal Tournament, as well as bonus skins for the commandos and Skaarj Hybrid. One bonus model is included. Several models can use more skins than their names imply. For example, the Raw Steel model can use Soldier, Thundercrash, Metal Guard, and War Machine skins, as well as the Raw Steel skins. Original models, textures, and animations by Epic Games. 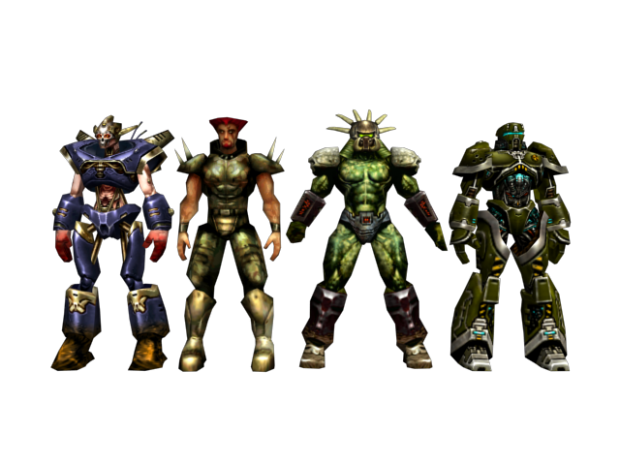 Otherwise very good model pack, all other characters seem to be o.k.

I don't think you've done anything wrong. Since all I did with the UV maps was increase the scaling so they would fit on the PC textures, the way they look on the characters is because of how Epic made them. I didn't actually take the models from the PS2 game, I got them from an archive full of 3ds Max files on an old UT site. It's possible the models in those files were unfinished, but what's in the pack is accurate to them.

It's been so long since I worked on this, but I don't remember there being a Female Necris model in the 3ds Max files, and if there was one in the PS2 game, I had no way of getting it. The Female Mercenary model should be showing up, but it might be that there are too many characters for your game to show them all. I think OldSkool Amp'd fixes that problem.

Sorry for taking so long to reply, I don't look here often.

Hey friend I found an error in the model Skaarj Hybrid (PS2) and Skaarj Boss (PS2) !!! When these move and by this I mean running and walking they do not reproduce any sound ... but the rest of the sounds for example ... when it jumps, or dies, or receives damage ... these if reproduced .. .
Can you fix them? or tell me with what programs can I edit the sounds of these models?
PD: sorry if my English is wrong ... I hope you can understand me and give me a help with this

Hi, thanks for letting me know. I'll have to search for the source files, but chances are I never added animnotifies for the Skaarj Hybrid animations. If that's all I have to change then it will be an easy enough fix, and I will upload a new version here.

Turns out the cause was even more stupid than I thought. I just had an incorrect package reference that made the game unable to find the footstep sounds.

The new version is up and should fix that.

Okay, should be fixed now.

Wow - updated!!"
Couldnt get custom skins
applied to them - maybe next?
Big thanks anyway!

Just downloaded this today, I'm quite new to this whole "mods" thing, I just want to know what to do in order to make this work. My current version is v436, and because I have Dominator as a playable character (Skaarj Hybrid), I'm assuming I have the Bonus Pack 1.

Hello! First of all I want to congratulate the creator of this excellent mod! I was very satisfied to be able to use the war machines and the bosses of the PS2. But I would like to know how I can solve the following error:
My brother and I are very fanatics of the game ... And when we play multiplayer "lan", these characters are not seen on the screen ... Do you understand me? ... I mean, the one who creates the lan server, if he can see the characters, but whoever connects will not see them ... I hope you can help me ... PS: Sorry for my English, I had to use a translator ...

Hi, sorry for the extremely late response. Do you have UTPS2Characters.u added to your ServerPackages as described in the readme?

There's a little problem with the "Female Commando" model: the left side of their chin is almost stretched out, likely due to the way the models were set in proportion or something like that. Is there a way to fix this?

Thank you for your work! I have a question. The models are great, but their heads don't fly off after a headshot, is this a bug? Is there any way to fix it? Or the PS2 models are designed that way? Sorry for the bad English, it's not my native language.