Tobe's Vertical Adventure is an indie, retro, platformer starring Tobe, the overly devoted gamer who's been forced on a treasure hunt by his materialistic crush, Nana. The big head duo will travel back and forth in the crumbling caves in search of treasures while rescuing fluffy animals, making you scream kawaii ne~ along the way. With 2 unique characters and a total of 4 islands and 16 levels to explore, Tobe's Vertical Adventure shall bring us back to a 16-bit yesterday. Key features: - Hours of classic platforming action through 4 islands of 16 levels - Play as Tobe or Nana, each with a unique storyline and move sets - Co-op Mode with a friend, as both Tobe and Nana - 16 bit graphical retro goodness - Experience the story through cutscenes and unlock the collectable soundtracks and artbook 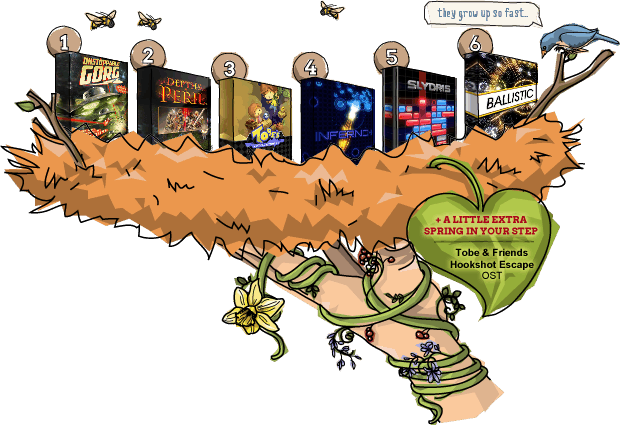 As you may know, the standalone version of Tobe's for Desura has been made available recently and it was advertised on twitter by the dev.
So I was to my Desura page to check if the game was really there and saw that Tobe's had disappeared from my account at all!
Luckily enough I was able to fix this issue redeeming again my Indie Royale Spring Bundle key: the game appeared again and has the standalone version altogether!
If you have the same problem and got the game by IR, you can try this :)

The standalone installer is available on the personal Spring Bundle page as well, just checked it!

Thanks for pointing out the solution for everyone! Hope you guys enjoy the game :)

And thank you for adding the standalone version!

So it is now stand-alone with the update, but I can't seem to update it without it asking me to pay $5.00, saying an error or running it through Steam. Am I doing something wrong here?

I sent a polite Desura PM to the developer about a week ago asking why the game requires Steam here when it's DRM-free in other places, but they haven't replied despite last being online yesterday. =(

Got a reply, wasn't being ignored. Just confirming that I've understood properly before I post any kind of outcome.

Please release a copy for Desura...Would love to try it

"This game require steam to run" :(
ok, i'll wait for a "true" release

Far from perfect, sometimes unresponsive controls with few stupid design choices (jumping from running results basicaly in the same distance as jumping from walking, etc.) and also lacking several features that would highly prolong the replayability, such as level editor (because the style of the game is basically asking for it). However, considering the low cost and fun I had playing this game, it's still a solid indie platformer that platformer enthusiasts shouldn't miss. BTW also check other…